Echo & the Bunnymen play past midnight in Paris 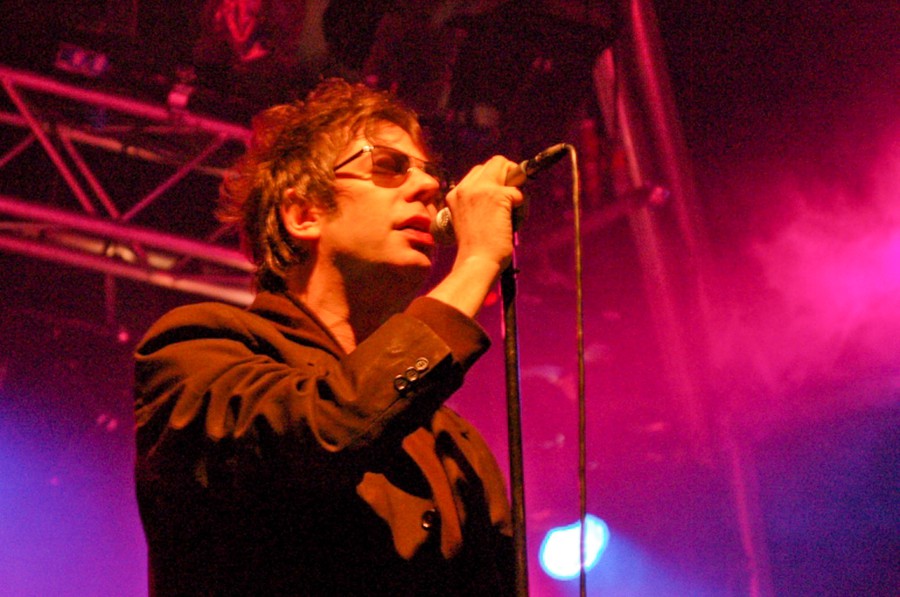 Ian McCulloch gets around Paris, but not by speaking French. Not by speaking any recognizable form of English either, though the Echo & the Bunnymen frontman hails from Liverpool, England. “Parlez-vous anglais?” garbled the 52- year- old to a crowd of slightly-graying fans. After 30 years of touring the world as a post-punk idol, McCulloch clearly did not learn French, but he still speaks rock star. “I’ve got a lot of memories,” slurred a barely articulate McCulloch, “but the best was from last night.” He then lit a cigarette and weakly kicked over his mic stand.

McCulloch just had one more question to ask the audience before launching into songs off the Bunnymen’s debut album Crocodiles (1980): “Where is the fucking ladies?” He had a point; the number of madams paled in comparison to that of the messieurs, most of whom have probably snorted coke off their original Heaven up Here record as many times as they listened to it. These angsty hipsters of the 80s’ once shook their Morrissey-inspired mops to the beats of their art house angels. They have haircuts now, and have traded in their black turtlenecks for black ties, but they’ve yet to shed their thick-rimmed glasses and leather jackets.

That night the Bataclan on the rue Voltaire in the 11th arrondissement, in McCulloch’s second favorite city, experienced a British invasion. Actually, the energy level was closer to high tea than the beaches of Normandy. However, there were plenty of gruff English accents in the crowd, ready with a loud “fuck yeah” every time McCulloch referenced home. His favorite city, of course, is Liverpool.

True to their reputation for producing cohesive albums rather than a patchwork of singles, McCulloch and the band kicked off the concert by playing through Crocodiles, an early classic of the post-punk era, and the equally acclaimed sophomore effort Heaven up Here (1981). They deviated from this line-up just once with a brief foray into The Doors’ “Roadhouse Blues” and David Bowie’s “Jean Genie.” McCulloch’s commanding voice could climb to clear and easy highs then descend to raspy lows upon the band’s ladder of arpeggiated hooks and sinister bass lines. The performance reached a climax when the Bunnymen launched into the repetitive yet gripping “Rescue.” “Is this the blues I’m singing?” belted McCulloch ad nauseum. The audience, of course, knew the answer.

The Bunnymen then played the hit “Lips Like Sugar,” or, as McCulloch called it, “the sexiest song ever written.” He pulled off this saccharine song with plenty of enthusiasm, but when the familiar riff of “The Killing Moon” queued up, his excitement dissipated somewhat. He spent most of the song far away from the mic, taking swigs from a mysterious container, muttering to himself, and killing some time with the occasional smoke and a shimmy. But it didn’t matter; the audience knew the words.

The light show in the Bataclan seemed specially designed to keep McCulloch’s face perpetually in the shadows. One could only see the aging rock star’s silhouette, back-lit by a soft blue glow, cut by a blinding white flash at the end of each song. The audience was left to imagine McCulloch in the skinny-tie, porcupine-hair image of his prime, but these days he really just looks like a drunk computer science teacher.

McCulloch then plugged his new album, dropping in March, calling it, “the best fucking thing I’ve ever done…by anyone.” To promote this highly-hyped album, McCulloch will be launching an American tour, stopping by Chicago at the end of March. There can hardly be many better ways to kick off spring quarter than to hear an aging Brit moan, “Show me your balls, you cheeky, cheeky boy,” as he did in his Paris performance. At least, that’s what it sounded like he said.