Motley crew of objects can an exhibit make 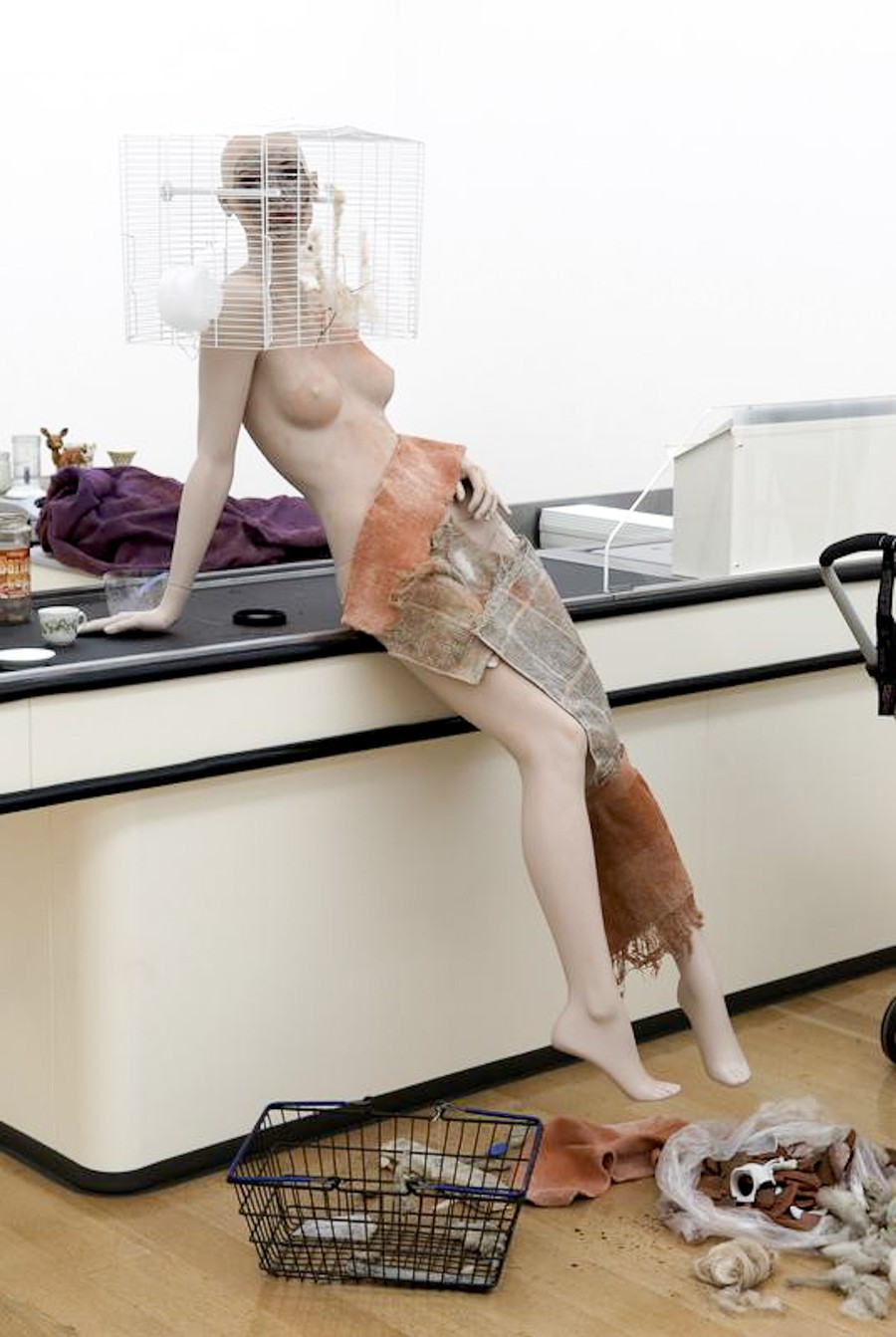 Wilkes uses old mannequins, among other objects, in her work.

Courtesy of The Modern Institute

What’s the difference between a painting and a pile of junk? Nothing, suggests Glasgow-based artist Cathy Wilkes, whose installation I Give You All My Money is currently on view at the Renaissance Society. Featuring a variety of objects ranging from paint-smeared mannequins to suspended frying pans, the exhibition is a miscellaneous assemblage of items that bear little unity to each other. But this total disassociation from its viewers gives Wilkes’s art its true momentum. As seemingly mundane, disparate objects take on extraneous meaning, they become something akin to icons, adopting a religious connotation that serves as the foundation of the exhibit.

Walk into the gallery, and the sheer quantity of negative space quickly becomes apparent. The walls themselves bear no artwork, stripping the installation of the conventional artistic standards that most viewers take for granted. Wilkes’s piece is positioned slightly left of the entrance, occupying a modest percentage of the room’s available area. Though bits and bobs of material, including strewn flower petals, almost empty bowls of food, and pieces of lint, fabric, and shards of pottery stray from the core of the exhibit, the installation maintains a sense of autonomy leaning toward total exclusion of the viewer.

Wilkes’s work appears oddly distanced from the onlooker’s gaze; it resists revealing its true significance. The exhibit shrouds itself in detailed mystery, and though there is a recurrence of certain motifs, namely the color white, consumed baby food, and smashed children’s toys, the exhibit’s meaning isn’t made obvious to the viewer. “I’m not concerned with being objective…it’s the most unimportant thing about art,” Wilkes said at a talk given on January 22. “I was living on unemployment benefits for about a year and during that time, all I did was read books written by other people. I began to think like them. But what’s the point of thinking just what other people are thinking? There is no reason for me to think about what someone else might think of my art while I’m working.”

Though viewers may be unsure of the coherence among the objects that make up the installation, the eerie nature of individual items forces confrontation. Two mannequins placed among a pair of super market checkout counters serve as the focal point of the exhibit. One is sprawled out upon the conveyer belt, its head caught in a bird cage, while smashed porcelain dolls, tattered cloth, and bundles of hair rest upon the floor under its delicately poised feet. The other mannequin sports a white nurse’s cap, dirt draped over its forearms and shoulders as it unabashedly crouches on a toilet. A wire tightly wraps around its eyes and from its skull hangs another random assortment of items: a teacup, wood chips, brass bells, and a frying pan.

Amidst the mangled children’s toys, empty pots and pans, and two naked female mannequins, weighed down by physical objects tied to their bodies, a common theme finally emerges: the burden of motherhood. And perhaps upon a second glance at the installation, the erudite viewer may notice a subtle but unquestionable borrowing from Catholic images: Two stacks of flat clay tiles present modest etchings of crosses on their sides, a motif that also appears on the nurse hat of the mannequin. The pristine white ladder causes the viewer’s eye to travel upward to a suggested heaven that exists somewhere outside of the installation itself, which is plagued by all too earthly needs: a never-ending cycle of purchasing, consuming, reproducing, and sacrifice.

And all at once, it clicks: Wilkes has taken the mundane, and by shrouding it in an intended, relative obscurity, has made icons of the mess of human life and suffering. Using the sacrifice of motherhood as a theme through which the sacrifice of Christ is symbolized, Wilkes has turned base objects such as empty bowls and smashed dolls into powerful representations of Christianity that transcend the squalid setting through which they are presented.

But there is something still deeply perturbing about I Give You All My Money that cannot ever be fully articulated, as the work is, like all of Wilkes’s creations, a highly personal affair. Something dark lies within the paint-smeared mannequins, whose bodies are exposed so blatantly underneath the muck that weighs them down; there is something disconcerting about the mess of empty jars and smashed toys on the floor. Perhaps, caught between her strong Catholic upbringing and the confusion of a post-feminist that still struggles with the idea of motherhood, Wilkes uses her work as the outlet of some frustration. Perhaps it disturbs us simply because we will never be entirely sure of its meaning. Either way, the reluctance that Wilkes has in revealing her own explanation of the installation allows for endless possibilities of individual interpretation. In a world where the artist’s voice often entirely blocks out the mind of its viewer, allowing the spectator to call some of the shots is refreshing.