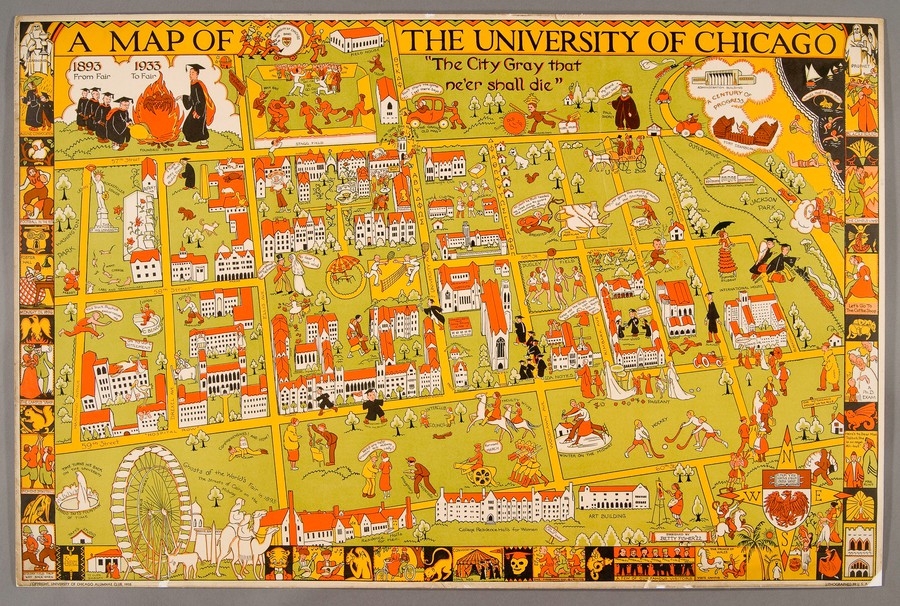 This cartoon map of the University's campus can be found in both the exhibit and the C-Shop.

Here’s an unforgettable image: A few fingers wandering under a pair of black panties in magnifying close–up.

It’s a provocative photo to be sure, the sort of thing that one can easily imagine made waves in 2004, when it was first published as the cover of Vita Excolatur, the University’s resident sex magazine.

It’s also one of a number of items currently on display in We are Chicago: Student Life in the Collections of the University of Chicago Archives, a retrospective exhibit of University life and culture at the Special Collections Exhibition Gallery in the Regenstein Libary.

“Tracking student life at the University of Chicago can be a daunting challenge,” reads one of two identical introductory text panels. (There’s one by each entrance of the gallery.) “Collecting and preserving this diverse and fascinating student history is part of the mission of the University of Archives,” the text continues. “ 'We are Chicago:' displays some of the most fascinating documents, photographs, and artifacts from the archival collections. Some were donations presented by individual alumni or their families. Others were responses to appeals in the alumni magazine or gifts of student organizations, fraternities, and clubs.”

The exhibit is divided into eight sections. Six display cases contain artifacts pertaining to certain aspects of student life, with panel cards displaying the themes: amusements, athletics, film and theater, etc. A larger case embedded in the back wall contains the more uncategorizable stuff—mannequins dolled up in Peter Pan adornments, an old varsity sweater, five rows of different U of C–centric t–shirts, including a personal favorite—”You are Here” with an arrow pointing to a swirling black hole on a plain white T, with the words ‘University of Chicago,’ scrawled underneath. On the far right wall, a projector screens photos of U of C students spanning several decades. A soccer player takes a hit to the head, hatted gentlemen watch a homecoming football game, a blond hippie scrawls something on the sidewalk.

In one display case, the original maroon ribbon selected to sway votes from students and administration away from the grey– and– gold that were the University’s original colors of choice, is embossed in an elegant display panel. A poster from a prototypical Lascivious Ball, part of the Libertine Arts Conference hosted by satirical student organization “Students for Violent Non-Action,” promises a night of revelry, including a naked dunk in the Ida Noyes swimming pool, free porn screenings, and a strip show. A menu for the Washington Prom, once an annual student affair, lists fried chicken and caviar among its dishes.

Hand crafted Doc film posters, advertising the serious, staid films the RSO was originally known for, hang in another display case while a cartoon map of the campus—complete with cartoon squirrels saying, “We want cheese--” hangs on the other side.

We are Chicago is the sort of collection that vivifies the past, confirming certain suspicions—students appear to have been a lot more lascivious in the ‘70s—and occasional fears—there used to be a Dames Club for married female students. They even had their own cookbook.

Seminal moments—a poster advertising a debate between Malcolm X and Willoughby Abner at Mandel Hall for the criminally low price of $1—seem especially poignant now that we know how important Malcolm X turned out to be. Willoughby Abner, unfortunately, doesn’t appear to have been so lucky.

On the far left wall, students can leave Post–it notes with their own U of C memories. Some notes are silly: “Three words: Scav, Scav, Scav!” while others drip with overt self–consciousness: “...the campus quietly echoes all of my feelings in its verbose atmosphere.” Nevertheless, the idea that one day, many years from now, they’ll be part and parcel of a new exhibit, fodder for some fresh–eyed or cynical U of C student, is strangely comforting. We’re living history.