For costumed activists, all the Court’s a stage 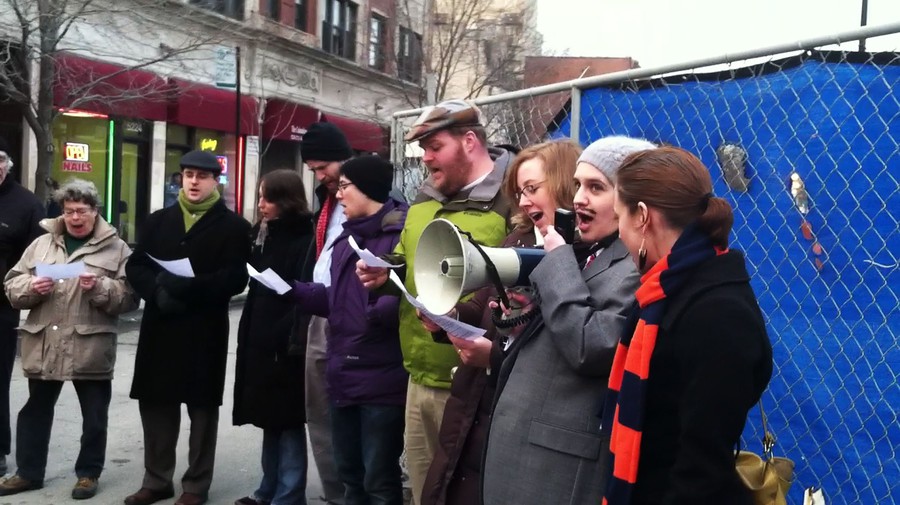 Courtesy of the South Side Solidarity Network

Donning suits and alter egos, a handful of students took a comical slant toward community activism on Friday afternoon, staging an “alternative version” of the Hyatt Hotel’s November groundbreaking at Harper Court on East 52nd Street.

Protesters emphasized that the parody was not anti-development but was rather a call for “University accountability to the community,” according to fourth-year SSN member Brita Hofwolt.

The demonstration was part of SSN’s ongoing campaign against the Hyatt at the Harper Court site. Carstens said that Hyatt’s poor track record of fair labor practices was the motivation behind Friday’s publicity event. Last November, Hyatt and Hilton employees spoke about unfair working conditions at different hotels throughout the city at a “teach-in” with students hosted by SSN.

Hofwolt said that SSN was seeking “an agreement signed between the business and the union that will make the whole organizing process fairer and less aggressively pro-business.” The groundbreaking lampoon was not intended to be an anti-development effort, she added.

Carstens said that students had an obligation to stand up for Hyatt workers.

“The University is building this Hyatt, in a sense, for the students,” he said. “It’s immoral for us to stand by and see a company who sees its employees as less than people come in and service our needs.”

Among the caricatures depicted in the scripted parody were Una Placenta, a female hotel developer, and Bobby Bureaucrat, a University official played by Hofwolt who was well-versed in “doublespeak.”

“This wonderful development really brings things that represent the Hyde Park spirit, like a L.A. Fitness!” Hofwolt said, in character as Bureaucrat.

The parody also included a staged “community takeover,” where Pastor Ken Beckman of Augustana Lutheran Church and an employee of Palmer House Hilton voiced their own objections. A reception at Southside Hub of Production (SHoP) followed the “groundbuilding.”

The Hyatt demonstration was the first in a series of “action-receptions” that will combine demonstrations with discussions addressing South Side social issues.