War and peace: 'Time Stands Still' grapples with both 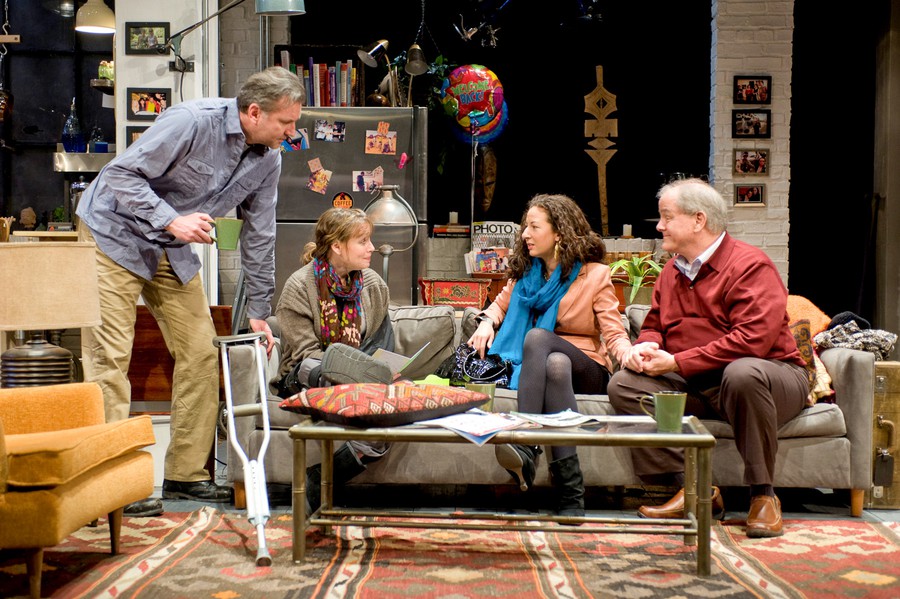 Written by Pulitzer Prize-winning playwright Donald Margulies in the midst of the Iraq War, Time Stands Still juxtaposes the banal with the complex, peace with war, and passion with comfort. Currently at Steppenwolf’s Upstairs Theatre, the play tells the story of adrenaline junkie Sarah Goodwin (Sally Murphy), a wartime photojournalist, and her reporter beau, James Dodd (Randall Newsome). Richard Ehrlich (Francis Guinan), the couple’s editor and friend, and Mandy Bloom (Kristina Valada-Viars), his young event-planner girlfriend and future wife, round out the cast. Set in Sarah and James’s cozy Brooklyn loft, the four-member ensemble takes the audience on an emotional, morally fraught roller coaster ride in a powerful but unpolished performance.

As the show begins, the dark stage echoes the mood of Sarah, who has just returned home from Iraq with injuries from a bombing. Reporting abroad has also traumatized James, who copes with the fallout by watching horror films from the comfort of his own couch. Sarah resents her dependency on a crutch, used to help her move around the apartment, and repeatedly yells in frustration when James tries to help her. With only a few lamps lighting the apartment, the scene feels realistic, as if the audience is watching through a window. Scenic designer Walt Spangler does an impeccable job transforming the stage into an artsy, lived-in studio apartment. Photographs cover the refrigerator and line the walls, a bicycle and green potted plants hang from the ceiling, and the bedsheets are ruffled as if someone has recently awoken.

Richard and Mandy visit the couple throughout the play, their simple happiness challenging Sarah’s resistance to settling down with James and forcing her to confront her constant need to record war and endanger herself. Sarah initially dismisses Mandy as attractive and naïve, as an obvious fulfillment of Richard’s desire for a mindless relationship—“I’m into events too,” Sarah mocks Mandy’s profession by discussing the events which a photojournalist must chronicle: war, genocide, and famine.

But Sarah reveals that the frequent discussions with Richard and Mandy have affected her when she questions the morality of taking pictures of strangers, instead of trying to change their lives. Mandy seems to be a direct refutation of James and Sarah, who focus on the seemingly endless misery covering the earth’s surface. Mandy instead opts to see beauty in the world, and accepts her life of comfort and “simple boring happiness.”

After a first act jam-packed with character and plot development, the second act begins slowly. The first half of the play brims with content and emotion—I almost wondered if the show was over when the lights were dimmed. But when the second act begins, months have passed in the story, making it difficult for the audience to immerse itself back into the play. The show briefly loses momentum after the intermission. Reestablishing the story feels petty after the emotional climax that finished the first act.

Murphy seems numb throughout the play, speaking in a spooked, stoical voice that makes it hard to decipher what she is thinking. Whether this was intentional or not, by the end of the show I wished she would show a little more emotion in her voice. Newsome’s acting is adequate, although sometimes he, too, lacks emotion. The chemistry between the couple is not convincing. Guinan and Valada-Viars, however, work well together on stage. Guinan seems genuine in his role as a middle-aged man finally ready to settle down. Valada-Viars’s portrayal of Mandy is also quite thoughtful, making the most of a part that could easily have become excessively cloying.

Despite these foibles, Time Stands Still is still fresh and thought-provoking. Margulies, an English professor at Yale University, puts forth some deeply evocative questions. Should we really forgo our own career ambitions in favor of helping the seemingly helpless? Should we care? Especially now, with the Iraq War’s official end, these sorts of questions seem to take on a heightened significance. In forcing us to confront these tough issues, Margulies deserves commendation.