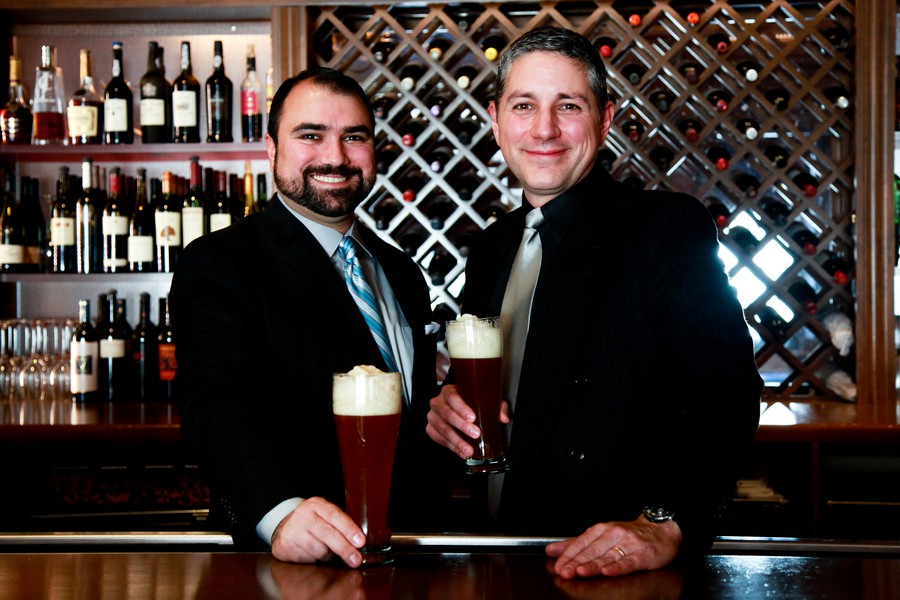 When Rob Sama (A.B. ’93) and Joe Berwanger finally revived Chicago-brewed Baderbräu Brewing Company, they found that they weren’t the only ones who had pined for the pale lager since its 1997 retirement.

Fans of the beer flocked downtown this past May to the Chicago Craft Beer Festival, when Baderbräu poured out the taps for the first time in more than decade.

“[One guy] came with a bubble-wrapped stemmed Baderbräu beer glass and he refused to get served with anything but that glass,” Berwanger said. When the waitress picked up his glass to fill it up with the brew to which he was so loyal, he refused. “He had to bring it up to the tap himself to fill it up.”

Since May, Sama and Berwanger have seen great success, selling 3,000 cases to Binny’s Beverage Depots across Chicago before the first brew, a testament to the the pilsener that was and remains a Chicago favorite.

“When I was in college, Baderbräu was more or less the craft beer of the time,” Sama said.

In the ’90s, Baderbräu held its own within city limits. Sama recalls attending the Taste of Chicago, where there were always three beer tents: two powerhouses of domestic beer, Miller and Budweiser, and then Baderbräu.

Back in its heyday, those who swore by Baderbräu included the German embassy of Chicago, former President George H.W Bush, and the eponymous alcoholic in the black comedy Shakes the Clown. Even among foodie circles, Baderbräu had a following, hailed by beer critic Michael Jackson as the “best pilsener [he] ever tasted in America” and served at Oprah Winfrey’s restaurant, The Eccentric.

But then in 1997, Pavichevich Brewing Company, the Elmhurst, Illinois–based brewery that created the Baderbräu trademark, went bankrupt.

Twelve years later, the journey of rediscovery began with a simple question.

“Whatever happened to Baderbräu?” Sama asked, amidst regaling tales with one of his old college roommates. The question piqued his entrepreneurial nature, and he pursued it further.

Initially working alone, Sama found that the Baderbräu trademark had just recently expired, so he bought it up with barely any hesitation. Then, he enlisted Berwanger, a Southside native and Sama’s former coworker at a New York venture capitalist firm.

“He gave me a call and said, ‘I just acquired the trademark of my favorite beer and I don’t know what to do with it,’” said Berwanger.

So Berwanger first created a paid survey for 350 Chicago beer drinkers to test out the potential for a market, and found that 40 percent remembered and missed the brew. With this knowledge, the pair began to set things in motion. First, they had to recreate the brew to live up to Baderbräu’s reputation.

After hours investigating and researching, Sama found and contacted Douglas Babcook, the creator of the pilsener. Babcook not only sent Sama the recipe, but the original yeast strain, which had been cryofrozen in a lab. Brewing and testing finally began and, during the process, Sama and Babcook exchanged samples, until they both believed the brew to be perfect.

“It’s a Czech lager, so it’s got a little bit of a bite in the front, a kind of caramel-y flavor in the middle, and a dry finish,” Berwanger said. “It’s a really nice drinking beer.”

Sama and Berwanger then began producing in larger quantities in the Southside brewery Argus. Afterward came retail, and the reception was “pretty fanatical,” Berwanger said.

“When Baderbräu went out of business, a lot of fans bought a six-pack and kept it on their shelves,” Sama said. Earlier in the relaunch process, beer lovers had started posting pictures on the Baderbräu Twitter feed of their own stocks.

“It warms my heart. It is like bringing back a piece of history that is almost gone. We’ve resurrected it,” Berwanger said.

For Sama, who used to buy the beer in Kimbark Liquors, his history with Baderbräu is more personal.

“There’s a lot of school pride in [the beer’s heritage] in my opinion,” Sama said. Not only have they received requests from the alumni hub, the Quadrangle Club, but the two will be providing Baderbrau to Homecoming and his class’ upcoming reunion in 2013.

“We called the University to see if we could make it the official beer of the U of C,” said Sama. With the beer’s Phoenix logo, the angle would certainly make sense. But, said Sama, the University is already committed to another beer brewed by another alum, Great Lakes.

Even without the University, the beer will also have a presence in Hyde Park. On October 19, The Cove Lounge on East 55th Street will be hosting a Baderbräu tasting, when they will officially begin serving it on tap.

But the journey isn’t over. Sama and Berwanger hope to own a brewery in the coming years and are already successfully finding private investors.

Berwanger pointed out that the pilsener’s resurrection is only the beginning. “Part of our brand is how the city of Chicago burned up and came from the ashes. So did the University of Chicago. So did the beer.”