UAA contention on the line as Brandeis, NYU arrive in Hyde Park 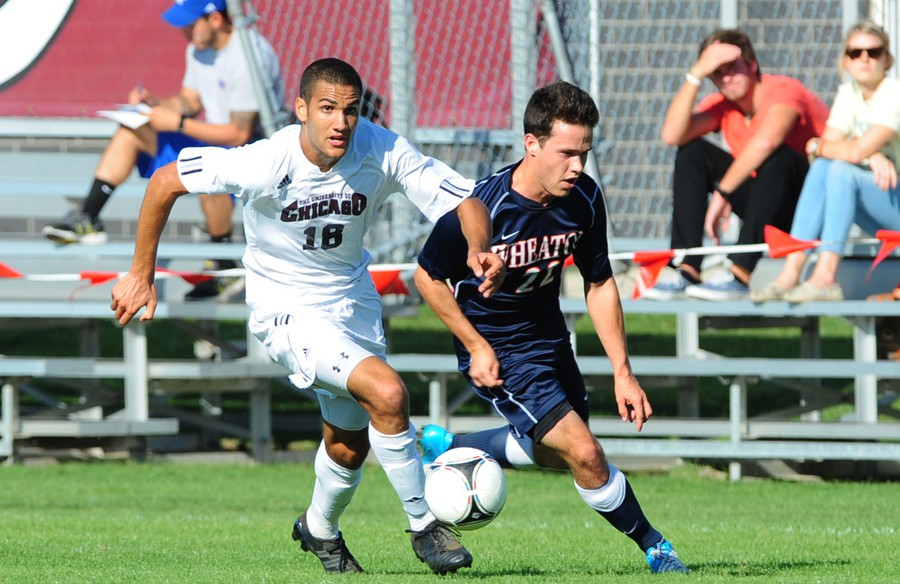 The Maroons host ninth-ranked Brandeis and 20th-ranked NYU this weekend in a pair of crucial home fixtures that could either thrust them to the front of their conference and into postseason contention, or see them consigned to the bottom of the UAA table.

“If you’re on the bubble at the end of the season, having wins against teams like [Brandeis and NYU] can really put you over the top,” fourth-year defender Garrett Laird said. “And finishing in the top of the UAA would look really good this season.”

In their two conference games so far, the South Siders have seen plenty of drama, coming back from three goals down against Emory in a 3–4 loss and going ahead 2–0 before tying Carnegie—then ranked fourth nationally—in double overtime. But with only one point to show for their efforts so far, Chicago (6–2–3) currently stands seventh out of eight in the UAA standings.

After the Maroons’ positive result against Carnegie—their third straight game in extra-time and a reminder that Chicago can certainly hang with the best teams in DIII—they played an outmatched Lakeland squad on Monday, cruising to a 5–0 victory to break their three-game winless streak.

Brandeis (11–0–1) is unbeaten in its last 17 games stretching back to last season, and is tied atop the UAA. The Judges’ stingy defense, having allowed only nine goals all season, is anchored by fourth-year Joe Eisenbies and third-year Ben Applefield. Up front, they’re led by fourth-year forward Lee Russo, who’s tied for the most goals in the UAA, with nine.

“Most of the teams we play are usually bigger than us, physically,” Laird said. “Brandeis is more similar to us in their style; they’re a smaller, quicker team that runs off the ball really well. A lot of the time we’re worried about set pieces and goals off of corner kicks, but Brandeis is more dangerous in open play.”

Last season, the Maroons faced Brandeis and NYU away from Stagg, suffering a pair of 1–2 losses to cap off a five-game mid-season losing streak. This season, Chicago will enjoy the comfort of playing at home, where they have outscored opponents 16-4 on the season for a 4-1-2 record.

After their Friday game against Brandeis, the South Siders will host NYU on Sunday afternoon. Coming off of a scoreless tie with Rochester, the Violets are led by senior striker Kyle Green, who has nine goals and three assists on the season.

The Maroons’ game against Brandeis kicks off at Stagg at 5:30 p.m. today; their game against NYU is scheduled for 1:30 p.m. on Sunday.