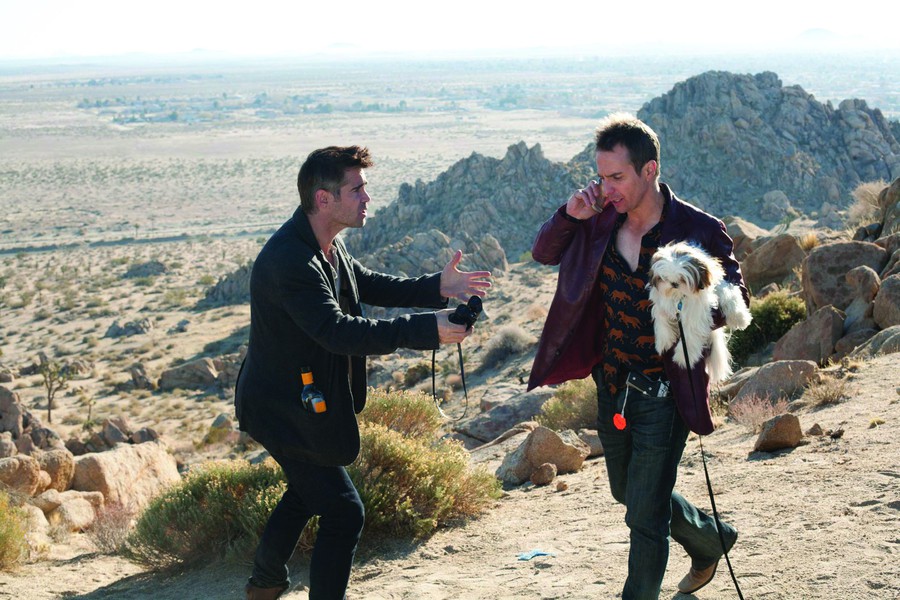 Even if you haven’t heard of Martin McDonagh’s Seven Psychopaths, odds are you’ve seen it—offensive lime green glamour shots of its titular psychos are on bus stop one-sheets, papering city walls or the ad spaces on the sides of your browser. Decidedly uninformative and blatantly unsubtle, the in-your-face promotional campaign relies entirely on its cast’s star power, and is unfortunately evocative of the movie itself. Too bad no one told McDonagh’s ego.

Seven Psychopaths, the only film project McDonagh has completed since his 2008 hit In Bruges, is pretty straightforward at first. Colin Farrell plays Marty, a successful Hollywood screenwriter who’s written the title of his latest movie, “Seven Psychopaths,” but little else. His unhinged bestie Billy (Sam Rockwell), from whom he solicits help, subsequently places an open call for psychos in the local paper. The ad promises a stint on the silver screen to those willing to divulge the details of their lunacy. Meanwhile, to keep himself afloat, Billy pulls a page straight out of a Chuck Palahniuk novel: he steals people’s dogs so his trusty pal Hans (Christopher Walken) can return them to their owners a few days later. Cue some weeping and unspeakably grateful L.A. pet lovers, and Billy and Hans are making bank. All’s well until Billy unknowingly steals a Shih Tzu named Bonny from the trigger-happy local mob boss (Woody Harrelson). Suffice to say, shit hits the fan.

It’s a fun enough plot with a stellar cast, peppered with hilarious cameos by the likes of Boardwalk Empire’s Michael Pitt and Precious’s Gabourey Sidibe. Throughout the film’s first act I was getting some Edgar Wright meets Quentin Tarantino vibes: all genre deconstruction with an emphasis on keeping things brisk and fun. Unfortunately the second act sees McDonagh dropping the fun in favor of the meta, and nothing’s worse than a movie that likes itself on behalf of its audience.

As Marty’s screenplay fills up with a parade of morally-ambiguous lunatics, the lines between Marty’s script and the world around him start to blur. McDonagh weaves these realms together consciously—ha ha, the characters are writing a screenplay, oh look, they’re drafting their own surroundings!—and the end result is a climax that is less surprising, subtle, and, undoubtedly, interesting than McDonagh intended.

For instance, in Psychopaths’s final act, Marty, Billy, and Hans are hiding in the desert with Charlie’s Shih Tzu, tripping on peyote while debating how Marty should end his own movie. Hans reads over Marty’s first draft, and remarks that, hey, none of his female characters have agency and they all serve little more purpose than taking all their clothes off and dying. Marty somewhat apologetically offers that he’s just trying to illustrate what a cruel world it is for women. This is apparently a joke because in McDonagh’s movie, too, the women serve little more purpose than—what else?—getting killed or getting naked. Maybe I would’ve laughed if I weren’t too bitter about the fact that McDonagh lined up and then wasted an incredibly capable female cast led by actresses who’ve more than proven their prowess, namely Abbie Cornish and Olga Kurylenko. Being aware that you’re objectifying women—or making a joke of the fact that you’re doing it—still doesn’t make it any less shitty that your movie is objectifying women.

The whole thing reeks of the male gaze, and while McDonagh perhaps thinks he’s charting new territory, his whole meta schtick comes off as more self-indulgent than biting. Doubly so when you consider his self-insertion into the film in the form of Marty, the screenwriter at the center of a load of crazies. Some may find this device, or at least McDonagh’s take on it, endearing, but for me it’s just a few degrees removed from Stephenie Meyer’s heroine, Bella Swan. McDonagh tries to walk the line between self-awareness and deprecation, but misses massively, and somehow ends up in the realm of the aggrandizing.

Don’t get me wrong, Seven Psychopaths has its strengths—it can be funny, and it ultimately plays like a well-written love letter to the talents of Rockwell and Walken, both of whom tread familiar territory with gravitas and swagger. Farrell and Harrelson do solid work, as always, and the vignette-style tales of the titular psychopaths strewn throughout give the audience a glimpse of how great the film could’ve been. It’s a particular shame then that McDonagh couldn’t hit the brakes on his own narcissistic intrusion, leaving us with the sour dregs of a movie whose ego predated its relevance instead of producing the masterfully-acted pulpy dark comedy that everyone wanted to see.