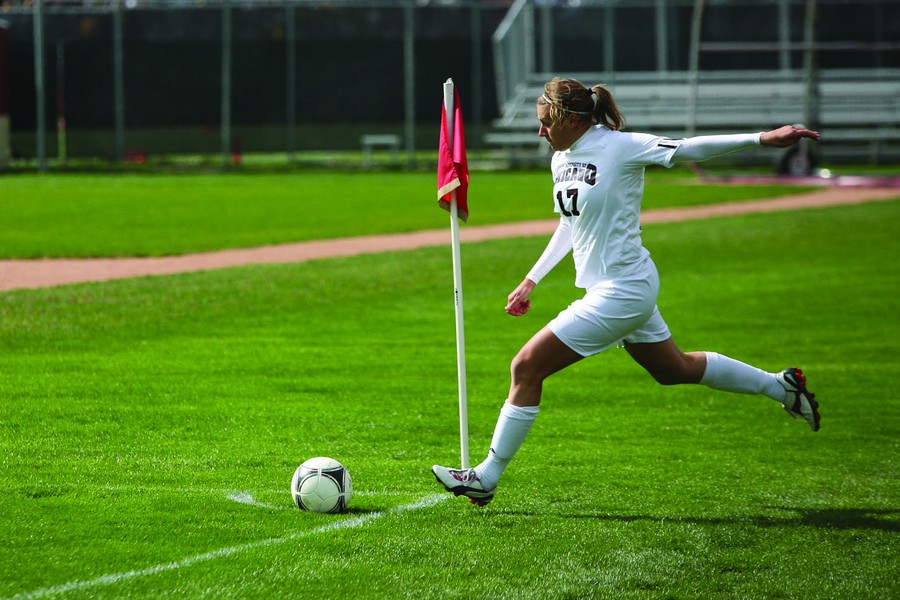 Third-year forward Natalia Jovanovic takes a corner kick in a game against Carnegie Mellon on October 6. The Maroons lost that game 2–1.

Chicago has come back from the dead. Five days ago, the Maroons sat in second to last place in the UAA without a conference win, ahead of only Rochester, the single team in the conference with a winning percentage below .500. What a difference a weekend makes.

Two wins in the space of three days against conference opponents Brandeis and NYU have catapulted Chicago (9–4, 2–2) into fourth place in the conference and kept its hopes of an NCAA tournament bid alive.

Chicago’s attack has looked dangerous all season, but the ease with which they took apart Brandeis’s defense was a surprise. Brandeis came to town with the best defensive record in the UAA. They left with the worst.

“I think that we became more composed in front of goal as well as more determined to finish,” third-year Liz Doman said. “It also was a complete team effort. The way we moved the ball up the field and around the Brandeis players gave our strikers great looks at goal.”

Things didn’t start well for the Maroons as Brandeis went ahead in the ninth minute when Sapid Edalati headed in from a corner. The lead, however, lasted only a minute as second-year Meghan Derken set up first-year Julia Ozello, who finished neatly past Brandeis goalie Francine Kofinas.

From there, Chicago never looked back. Derken gave the Maroons the lead in the 17th minute, but the one goal advantage didn’t do justice to the extent of the Maroons’ dominance.

In the second half, Chicago put that right. Ozello grabbed her second goal of the game early in the second half with a powerful finish in the box before Derken doubled her account after being played through by second-year Sara Kwan.

Kwan made it five just two minutes later. After exchanging passes with third-year Micaela Harms, the second-year forward completed the move with a clinical finish into the top corner. First-year Madeleine Horvath concluded the scoring in the 79th minute when she rounded the Brandeis keeper before slotting into an open goal.

It was an emphatic victory, especially given the importance of the game, but before Chicago had time to draw breath, they were back in action against NYU on Sunday morning.

The Maroons came out strong against the Violets, and took the lead in the 12th minute. Kwan went on one of her typically mazy runs through the box before playing in third-year Natalia Jovanovic, who finished the move. Horvath got on the score sheet for the second time in three days in the 29th minute. A Chicago corner caused havoc in the NYU penalty area and Horvath was able to get the vital touch to double her team’s lead.

There was no offensive explosion in the second half, as there had been two days before, but the Maroons were able to see out the victory with relative comfort as an aggressive NYU was stifled by the Chicago defense.

This weekend has marked a genuine return to form for the South Siders, who had good reason to be pessimistic after two defeats in their first two conference games. The Maroons displayed such dominance that there might even be some frustration that they weren’t able to produce this sort of form against Carnegie Mellon last week. But the focus, as it has been all season, remains on moving forward—learning from mistakes as opposed to dwelling on them.

“The difference between these games and our first two conference games is that we learned from our mistakes in the first two and then played to our strengths, like winning the 50/50 challenges and playing possession,” Doman said. “We became much more systematic and focused on doing the little things right so that we could keep the ball and score goals.”

The not unrealistic path to earning an NCAA tournament bid will be underway with a trip to No. 14 Wheaton (12–2–2) tomorrow evening. If there’s one sure way to get to the tournament, it’s by beating high-ranking teams. But, then, nothing about this season has been certain for the Maroons.

Kickoff against the Thunder is scheduled for 7 p.m. tomorrow night at Wheaton’s Joe Bean Stadium.