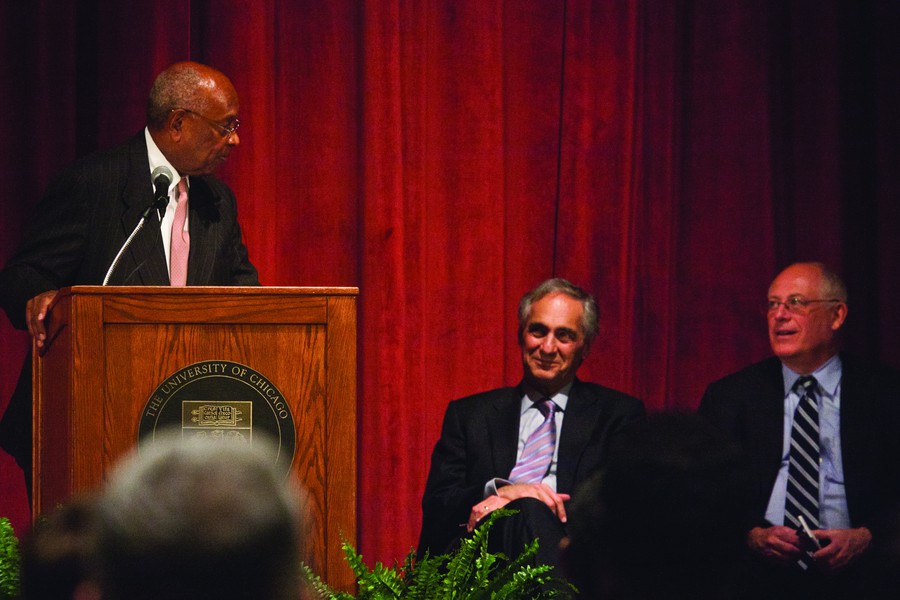 According to University President Robert Zimmer, the symposium spawned from the realization that the University was lacking business contracts with minority- and women-owned businesses, especially those in professional services.

“We want to create opportunity in an environment where diversity is recognized,” Zimmer said.

The reception served as a networking opportunity for the 422 people, representing 45 businesses, in attendance at the symposium. The businesses were selected by recommendation, some by organizations including the Chicago Minority Supplier Development Council, the Chicago branch of the Women’s Business Development Center, and the advocacy group Chicago United.

Today, the 45 businesses will have one-on-one meetings with University officials in the department that corresponds to their industry, in the hopes of establishing a relationship and securing a contract with the University or the medical center.

“They’d never [otherwise] have an opportunity like this,” said Assistant Vice President for Business Diversity Nadia Quarles. According to Quarles, the meetings give businesses a unique chance to pitch their business to the University personally.

At last year’s event, Governor Quinn called the symposium a “model” for colleges across the state. This year, he noted that Northwestern University emulated the example set by the University.

Sheila Watkins and Jessica Jones, administrators at Northwestern’s department of University Services, confirmed that the school held a symposium modeled closely after the U of C’s last June and that Quarles advised them in planning their event.

Watkins and Jones said the symposium-model is more effective than their past efforts, which included business fairs aimed at minority-owned businesses. When the businesses know they have been vetted beforehand, they can be sure that the institution is serious about working with them, they said.

“They have to fit a certain criteria,” Watkins said. “We’re asking for the best of the best in minority-owned businesses.”

Brad Trask, consultant at the woman-owned Gagen-MacDonald, said he thinks the symposium is important in bringing the perspective of woman and minority-owned businesses to University operations.

“It’s a difference that matters,” he said.

But Carolyn Grisko, president and CEO of Carolyn Grisko & Associates, reflected on whether factors like age and capitalization of a business are more important to consider than the gender or race of the owner.

“Women start more small businesses than men do,” Grisko said. “It’s an open question whether they should be considered disadvantaged.”

Grisko’s company, a public relations and marketing firm she started sixteen years ago, has 22 employees and has worked with such distinguished organizations as the Bill and Melinda Gates Foundation.

“I don’t feel disadvantaged,” she said.