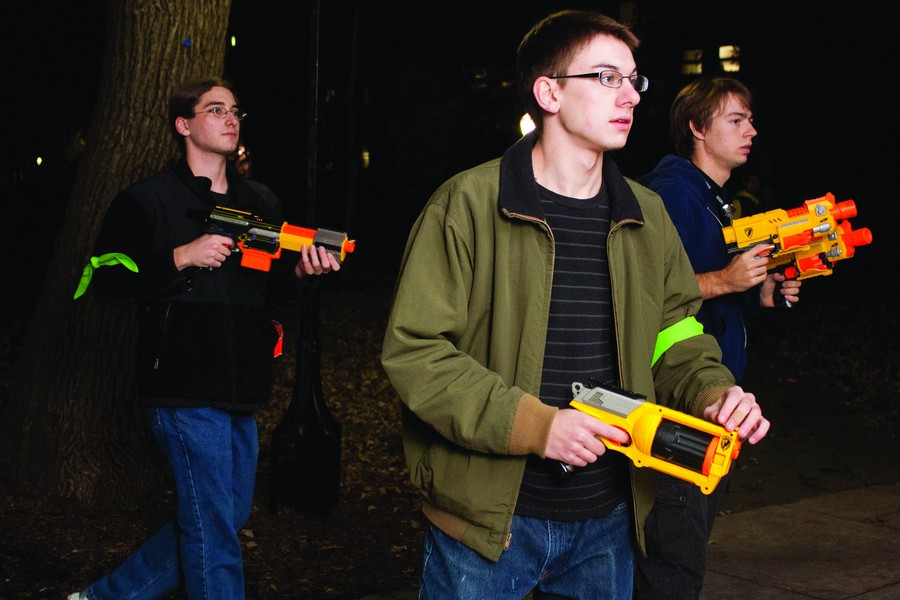 A friend came up to me about two days into Humans vs. Zombies and asked, “Why would you want to run around all day chasing people and pretending you’re dead—or, worse, stay cooped up in your room all day avoiding imaginary zombies in stupid green bandanas?”

My response was to laugh it off and say, “I don’t know; I just like it.” I’m ashamed I didn’t defend the game better, because I did know. I wanted to run from the imaginary undead because it’s awesome, obviously. But it’s more than that.

Why do I like it? Maybe for the same reason that some guys like dressing up like the Michelin Man and running a misshapen basketball through a bunch of angry, sweaty man-children, hoping to pig-pile anyone trying to reach the end zone. Or for the same reason that Tiger Woods likes to go on long walks across very well-manicured fields and hit a little white ball into as many holes as he can find.

The reason is because it’s fun; it’s a release from everyday monotony and an outlet into the fantastic alternate reality that is sports.

It’s all about testing yourself.

We deal with tests everyday: math tests, English papers, vocab quizzes, LSATs, and MCATs. These tests are not fun. In sports we can test ourselves in another world, where it doesn’t matter, so we can enjoy the challenge.

In some ways the stakes are higher—I was risking my life in Humans vs. Zombies (HvZ), but only in the reality of that game. I took risks I probably wouldn’t take in my real life. (OK, in reality, I would be halfway to Canada hoping someone else killed all the zombies.) In one instance, I crouched, literally shaking in my boots, behind a pillar, while a gaggle of six zombies strolled by on University Avenue.

I could have stayed there, unseen, and been late to my class. But I took a chance. And so after snapping a picture of the zombies to show my HvZ mentors (Daniel Booth and Emily Tixier), I took off in a dead sprint away from them. I got some pretty weird looks as I ran, terrified, through packs of Chicago civilians, but I escaped and made it to my Hum class on time.

I enjoyed that seemingly ridiculous experience because it was exhilarating. I was testing myself to see if I could survive, and I did. What makes this game awesome is that if I had died, that would have been fine, too. I can wake up tomorrow knowing I’m that much more prepared for a real zombie apocalypse. Everyone wins. 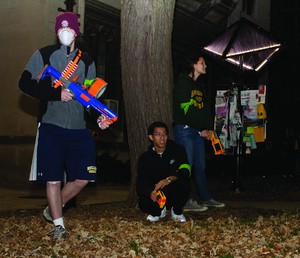 One of the great aspects of the sports world is being part of a team, a group of people you might have nothing in common with outside of the competition. For example, one of my teammates on the lacrosse team is from Berlin, a Fulbright Scholar, and a graduate student. I am a first-year, NOT a Fulbright scholar, and hail from a suburb outside of Philadelphia. We have very little in common. However, after playing a tournament in what felt like a torrential hurricane with our cleats and legs (and somehow my left ear) caked in mud, we became friends.

This happened on an even more drastic scale during HvZ. The “silly green bandana” signified to everyone (who was in the know) that I was a survivor. I would walk through the quad—well, it was more of a hurried paranoid speed walk—and any fellow human I saw was an instant teammate. An ally. We would band together on the way to class to maximize our security and on the walk there become friends. I met people I never would have had a reason to talk to without participating in this other world. And the great thing is that even though the zombies and Nerf guns went away when I stopped playing, the friends didn’t.

Like in any other sport, we also had fans. Though I spent a lot of the game sneaking through doorways and hiding in my room eating ramen, when I did emerge into the common room, housemates would ask me how the game was going. Any time I passed my RA, Matt Walsh, he would ask, “Still human?” and nod approvingly when I said yes. During classes, people would ask me about the game, citing stats they read online like they were ESPN commentators. It brought a great sense of community to the first few weeks of university life.

Truthfully, not everyone was a fan. Many people who were not playing regarded the premise of the game somewhat condescendingly. However, the University of Chicago, I found, was a place where that criticism—I’d like to call it envy—was limited.

For every naysayer there was an enthusiastic player ready to talk strategy. In a real zombie apocalypse I know who I’m sticking with, and it’s not going to be that kid who thought he was too cool to play pretend, because dancing around like a gleeful toddler in the end zone is no more manly than shooting someone with a neon Nerf gun. Sports are sports, and in the end, we’re all just taking a few minutes to play pretend.