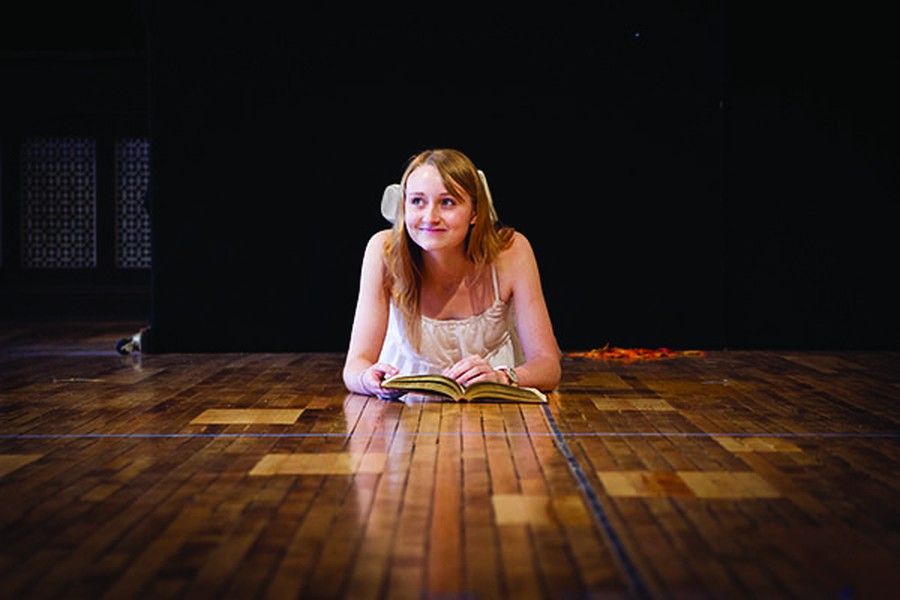 The power of death and the power of words are two of the most important things you begin to grasp growing up. For four-year-old me, it was the hamster, Pinky, whom I buried in a shoebox under the willow tree in my backyard, and it was the picture books whose stories I no longer had to fabricate once I learned to read.

For Rae Gray, a third-year, the lessons came in middle school. “A few of my friends’ parents died then,” Gray said. “[At that time] I seemed unfocused in class. When I started reading, that helped me channel the places my mind was going. One of the biggest tragedies of my life was the closing of the Borders bookstores in Chicago. When I’m in a bookstore, I lose all sense of time and place and get completely carried away.”

Gray has been acting professionally since she was four and is starring as the young girl Liesel in Steppenwolf Theatre’s upcoming production of The Book Thief, set to open this weekend. Adapted for the stage by Heidi Stillman, the story is based on Markus Zusak’s young adult novel of the same name.

“We have a narrator [played by Francis Guinan],” Gray said, “and you find out that he’s Death in the first scene. It’s his story, in which he makes a point about humans. He’s dressed like a normal guy. He says at the top of Act Two that he doesn’t wear a robe or have weird facial features. Death looks like us.”

The Book Thief, published in 2006, is a World War II-era tale. Death presides over the action; he observes Liesel as she develops friendships and investigates local mysteries. With the Nazis taking control of Germany and animosity towards Jews mounting, Death uses Liesel’s story as an opportunity to marvel at human will and the desire to survive.

Not far from childhood herself, Gray was intent on stressing the inconsequentiality of Steppenwolf’s billing The Book Thief as a young adult play. She admitted, however, that a 10 a.m. show might not appeal to anyone but a middle-school teacher planning a field trip.

“It doesn’t affect my performance,” she insisted. “This is my first children’s show, but it’s not really a kid’s show—the content is mature. I’m being truthful and genuine, which is what I try to do in every show. I guess it is targeted to be two hours long. Still, the fact that it’s for kids hasn’t drastically affected it. The Book Thief itself is supposedly a young adult book, but the content of it is pretty…I mean, it’s Nazi Germany. It’s not light.”

Like Liesel, Gray’s love of reading has grown and changed through Zusak’s work. “I have to say that it’s grown on me to the point where I’d now consider it one of my favorite books of all time. Most of what’s happening has to do with relationships between characters,” she said. “Each time I read it, the happy moments grew happier, and the devastating moments were more devastating. I had become so invested. So reading it again and again has helped me involve my emotional self. I’m naturally reacting to the events of the story.”

“Death points to a duality in human nature: we can choose what to do in difficult situations,” Gray further explained. “We make decisions that seem right at the time, and then we look back on them and they’re imperfect. Humans can do wonderful things despite a terrible backdrop. The characters do beautiful things: Liesel and her family hide a Jew in their basement.

“Death’s point is that humans can do beautiful and ugly things, but they have the power to choose. Death is…baffled by humans. He’s not sure existence is worth it because life is so hard, but Liesel’s story shows him that existence might be worth it since sometimes humans do the right thing.”