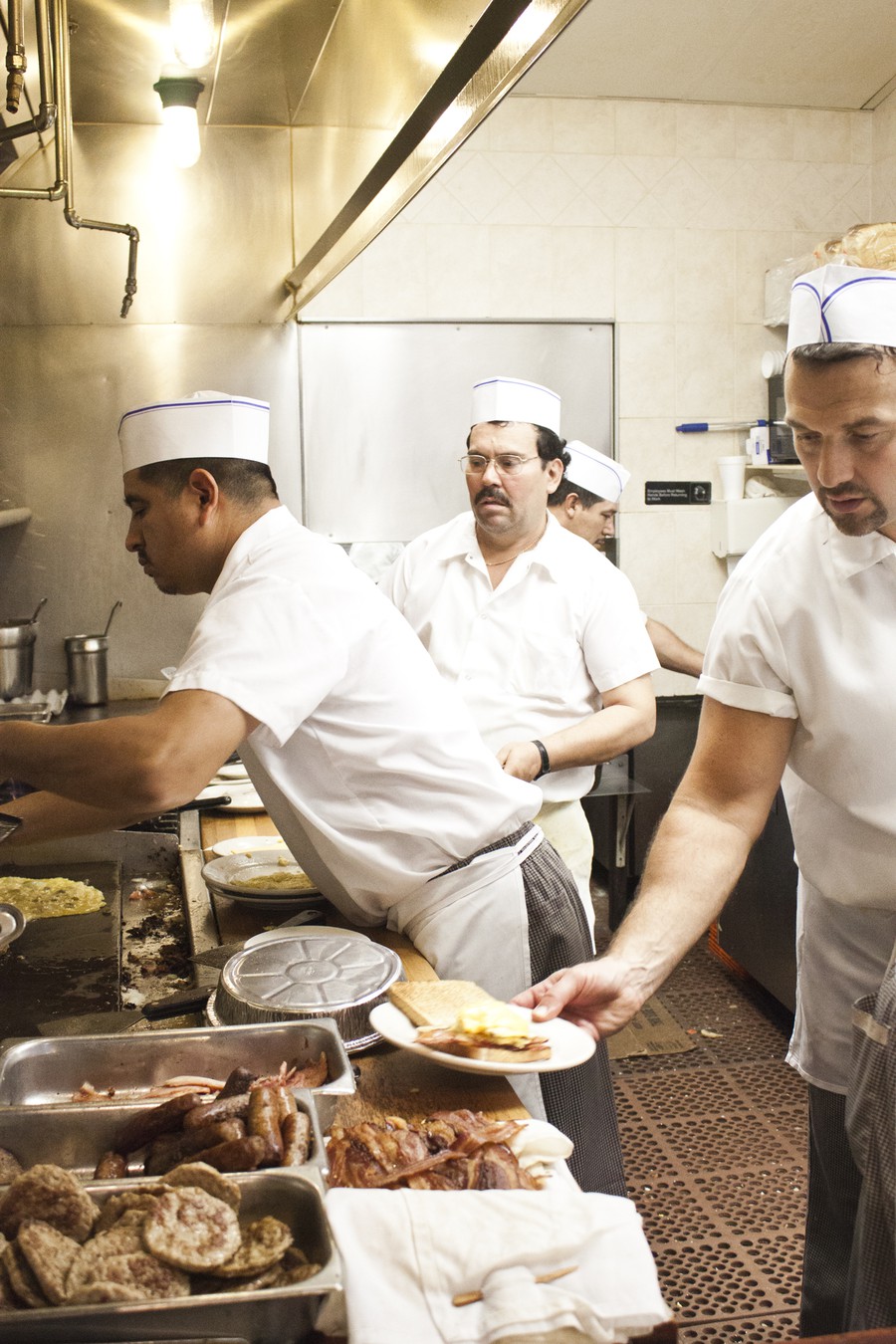 Valois, the early-bird diner that serves breakfast all day, cafeteria-style, has been a Hyde Park staple in one form or another for decades. The restaurant is a favorite of President Barack Obama, and a poster at the ordering counter displays the President’s favorite breakfasts. Two Maroon reporters spent last Sunday at Valois and recorded some snapshots of what they saw.

4 a.m.: The Valois manager on duty, Johnny, arrives at work to start prepping. He’s been at the diner for three years, and is proud of it.

4:30 a.m.: The chefs appear to start preparing food for the 5 a.m. opening. “It’s real, high quality food at a reasonable price done quick,” Johnny says. “We’re regularly tested by the same guy who tests McDonalds. He says we beat them in food quality and time.”

Just before 5 a.m.: My friends and I are the first people outside Valois, and the only people standing in the 36-degree weather.

5 a.m.: A security guard vigilantly watching from across the street enters the diner silently right when the lights turn on. We realize, jarred out of sleep deprivation, that we can go in, too. The constant noise of dishes and mugs clanging over the low volume of the television provide a nice, soothing backdrop.

7 a.m.: It begins to get bright outside, and I start to feel as awake and vibrant as all the staff already looked.

Johnny could identify half the people in the restaurant by name, and at least another quarter by face. “We used to have more people, but it got a lot less busy when the construction started. There’s a lot fewer places to park now,” he says.

Even though Valois didn’t exist in its current configuration until the past decade or so, it gives the feeling of a constant presence. “Some of the people have died off after coming for 40 or 50 years,” Johnny says. “That chef at the end there, the one with the goatee, he’s been here 40 years doing the same thing. When it’s his birthday some customers will come in with a cake that has his face on it when the line is out the door. For a few seconds everything will stop, everyone in the restaurant will sing him happy birthday, he’ll grin like he’s the happiest man for a few minutes, then it’s back to work.”

As the morning becomes afternoon, neighbors and students come and go, always getting fast food for a good price.

They keep a tight ship, as Johnny likes to say.--James DelVesco

2:30 p.m.: The cast of characters continues. Remnants of churchgoers, clad in matching purple blazers with large lace flowers protruding from their shoulders, pick at remaining piles of hash browns and eggs drenched in Louisiana Hot Sauce.

One woman shuffles to a corner of the restaurant with a tray full of green: pickles, broccoli, lime Jell-O, and a 7 Up.

An elderly man coos to his wife in Italian. She blushes and leans on her cane.

6 p.m.: The time that Leland Jackson, teacher at Kennedy-King Community College, usually leaves Valois after a day of grading papers. Before that, he pulls out a Treasure Island bag full of sociology and history midterms, which nestles against his tray of grits. “I’ve been going here about 20 years now,” Jackson says. “I often come in at 8 and grade my papers here until 6 or so.” Jackson grades while he talks, waving his red pen around false definitions of totalitarianism like one might nonchalantly knit a scarf.

He recalls stories of his past activist involvement, complete with Vietnam War protests and racial movements, while he gives one student a B. He ponders the impact of teaching. “My mother always told me that there are two types of people in the world: those who know more than you, and those who know less than you.” Jackson pauses to scrawl an A on one student’s exam. He smiles.

“Remember, you’ll always be in the middle.”