At 93, activist looks back on lifetime of service 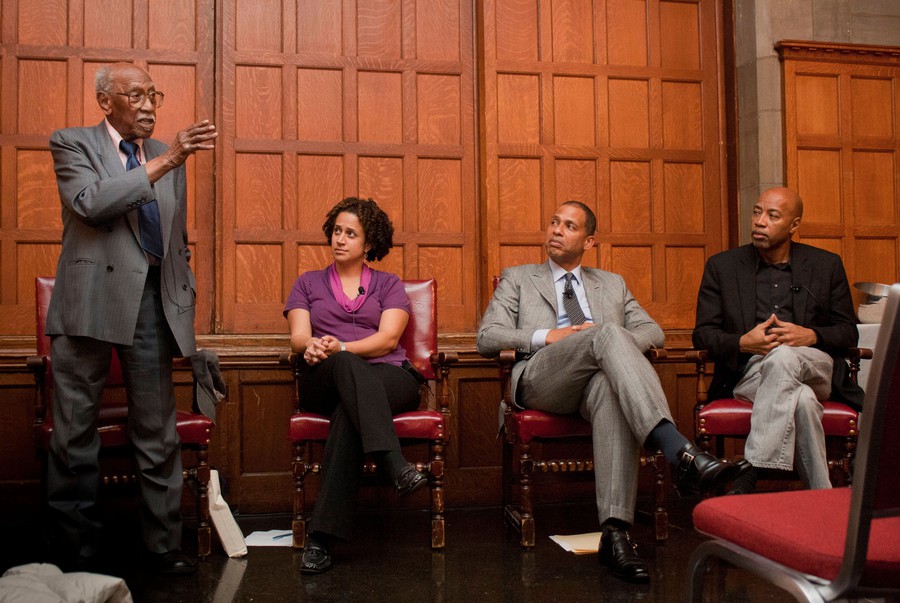 The 2012 Benton Medal for Distinguished Service recipient discussed his childhood on the South Side and his lifelong dedication to service in a speech on Wednesday at the Quadrangle Club.

Black started by explaining his beginnings as an outspoken activist. “The story goes,” he said, “that when I was born on December 7th, 1918, I looked around Birmingham at that time and I said to my mother: ‘Shit, I’m leaving here.’”

His love of Chicago started when his family moved to the city in August of 1919. “Our white neighbor told my mother, ‘If anything happens, you and the children just come on over.’ My mother was flabbergasted. A white person had never shown such kindness to her.”

As Black got older, he saw the transformation of the South Side firsthand. Upper-middle-class Jews and Irish Catholics that had previously been neighbors moved away, and many parts of the South Side saw an increased black population and sharply growing crime rate.

Black was told that he would fight in WWII when he was still living with his parents.

“When they sent me my [draft] notice, ‘You have been selected from among your neighbors to serve your Uncle Sam,’ I sent it back saying, ‘I don’t have an uncle named Sam,’” he said. Despite his reservations, Black left to fight in August of 1943.

Black said that his experiences in Europe, including the liberation of the Buchenwald concentration camp in Germany, and the intense inequality between black and white soldiers in American regiments, non-existent in the French and British platoons, moved him to resolve to “make the world better.”

Even after serving, Black’s social commitment continued. Black was active in the civil rights movement, meeting Dr. Martin Luther King, Jr. and Rosa Parks, and leading the Chicago contingent of the 1963 March on Washington. He also worked with the Negro American Labor Council and was head of the National Teacher Core.

At 93, Black is still determined to make changes that he perceives are necessary for the betterment of his neighborhood. Although racist policies, so pervasive in his time, have long since been made illegal, Black believes that his struggles as a young man on the South Side are not so different from the difficulties of those living there today.

Although Black moves more slowly now than he used to, the pace at which he seeks improvement for one of Chicago’s largest African American communities continues at a sprint.