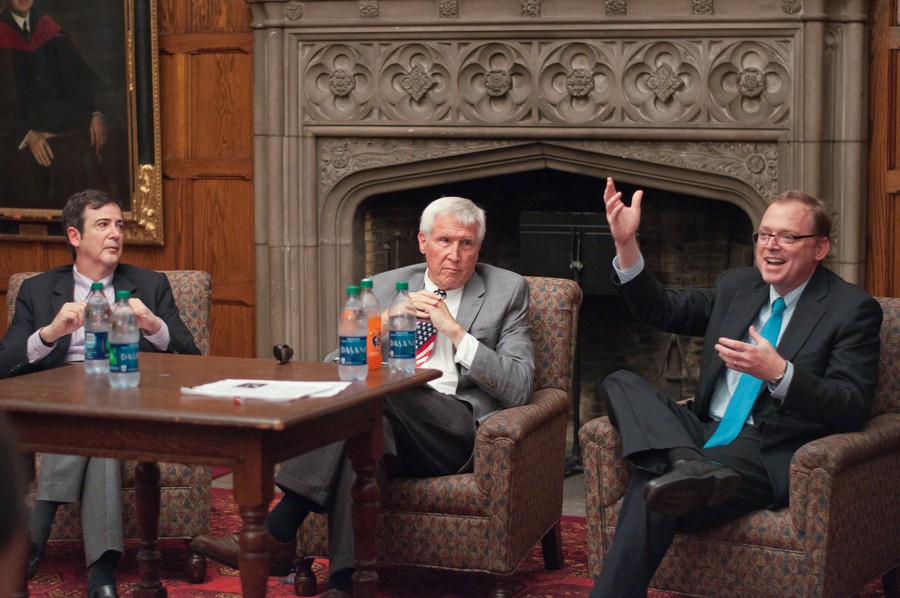 Two top presidential economic advisers agreed on two areas of the American economy that need serious reform, but debated President Obama’s handling of the economy and action needed for the next four years during a discussion moderated by senior lecturer Allen Sanderson on Tuesday evening in Swift Hall.

Kevin Hassett and Robert Shapiro (A.B. ’70), who have advised Mitt Romney and President Barack Obama respectively, both agreed that the current tax code needs serious reform and that the United States needs to consider a serious plan for reducing its deficit. Hassett called the current tax code “indefensible” and argued that Romney’s economic proposals, including his plan to cap domestic spending at 20 percent of GDP and reform Medicare and Medicaid, would return America to a world “where we can grow again.”

“The U.S. economy is still in very unacceptable shape,” said Hassett, who also advised President George W. Bush during his 2004 campaign and John McCain during his 2000 and 2008 presidential bids.

Shapiro defended the President’s economic record, arguing that Obama inherited a dismal economy that was already losing 700,000 jobs a month.

“The achievement is that we didn’t fall into a global recession,” said Shapiro, who advised President Bill Clinton, as well as Al Gore and John Kerry on their presidential campaigns.

“There was a sense that everything was unraveling. There were many institutions that were in worse shape than we knew.”

Hassett also questioned the effectiveness and necessity of Obama’s $787 billion economic stimulus in 2009, saying that the measure was a quick fix that did not consider long-term consequences on the economy. He argued that the stimulus put the country into a “cycle of dependence.”

“A Keynesian stimulus is guaranteed to give you a negative outcome,” Hassett said.

Shapiro said that Hassett’s “economic logic was flawed” regarding the stimulus.

“People’s concern was not ‘are my taxes going to be higher in 5 years?’” he said. “It was ‘is the U.S. economy going to collapse?’”

The event was co-hosted by the Chicago Society, Student Government, College Republicans, UC Dems, and the Institute of Politics.