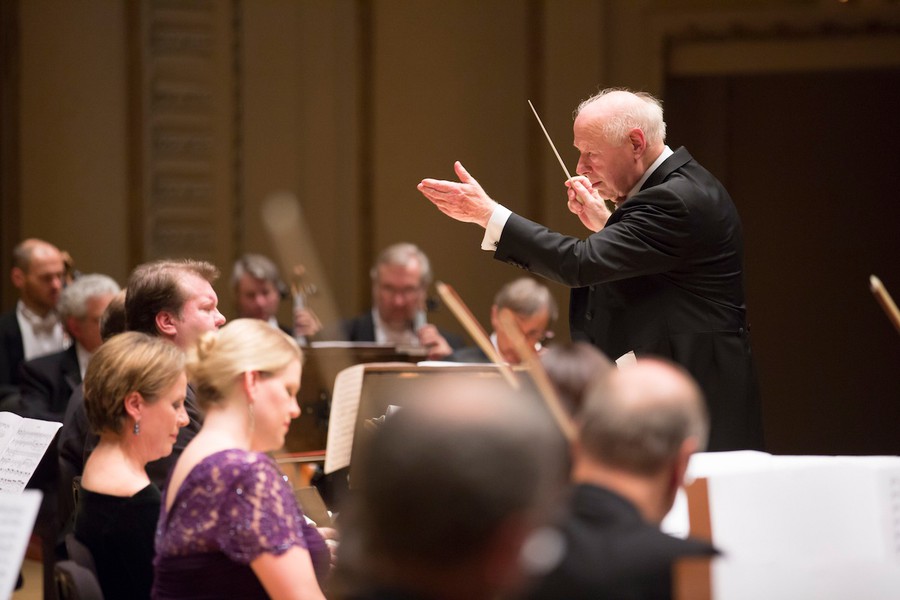 The rarity of live performances of Beethoven’s Missa solemnis is explained in part by the work’s extraordinary demands on orchestra, soloists, and especially chorus, to say nothing of the interpretive demands placed on the conductor. Riccardo Muti himself, Music Director at the CSO, hasn’t yet taken on the work, saying, “Not yet. But before I die!” But Bernard Haitink, a former principal conductor for the Symphony who declined the offer of the position of music director, citing his age—then well into his seventies, now 83—conducted with a deep awareness of the architecture of the piece and an equally impressive attention to detail that avoided some of the pomposity into which other veteran conductors, attempting to give the piece its due weight, unwittingly fall. The work is divided into five basic sections — Kyrie, Gloria, Credo, Sanctus, and Agnus Dei and although the transitions from one to the next could perhaps be smoother (a complaint to be taken up with Beethoven), Haitink’s astoundingly clear conception of the work’s ethos, pacing, and form made the performance riveting from beginning to end. I have no memory of a superior live performance by the CSO.

Beethoven (1770-1827) wrote the piece between 1819 and 1823, and felt that it was his greatest accomplishment, a statement of some gravity, given that he was working concurrently on the more-famous ninth symphony (completed the following year), and his last three piano sonatas. Beethoven's so-called middle (or heroic) period (c. 1800-c. 1815) discards the quaint, courtly models inherited from the later eighteenth century with such works as the Eroica Symphony (1805), twice as long as the symphonic norm and featuring a groundbreaking funeral march in the second movement, the thunderous Fifth Symphony (1808), and the expansive Emperor Concerto (1811). In the third period from 1816 to his death, during which time his deafness became total, his music became more concentrated, abstract, harmonically radical, and interested in counterpoint, especially through the influence of Handel, whom Beethoven greatly admired.

The soloists were all satisfactory, but the soprano, Erin Wall, was a revelation: Her voice had ample power and unusual flexibility that easily met the substantial demands Beethoven’s work presents. Anthony Dean Griffey, the tenor, was perhaps not as suited to the work as the soprano, but his rapport with Haitink was exemplary. A particular highlight was the violin solo during the Benedictus, played by concertmaster Robert Chen. The introduction of an extended instrumental solo into a choral work has precedent for Beethoven only in the Choral Fantasy (1808), which features a solo piano part. The chorus, under the direction of Duaine Wolfe, displayed no weakness of any kind.

There appears to have been some confusion about attire among the performers: The men in the orchestra, conductor, and bass-baritone were in white tie; the male chorus and tenor were in black tie. However, the bass-baritone’s white waistcoat was a jarring three inches longer than his tailcoat—a sartorial gaffe that, since its unfortunate appearance during President George W. Bush’s May 2007 white-tie appearance with Elizabeth II at the White House has apparently (alas) proliferated.

The performance’s single highpoint, if one is to be chosen, was the sight of the serene maestro, after the piece had ended, arms still upheld, attached to the silence in the wake of the great spiritual work, not moving as a few excitable audience members interrupted his silence with premature applause. The uncertain clapping died down almost immediately; the conductor relaxed after a moment to indicate the “official” end of the performance, and enjoyed his multiple ovations as applause broke out thereafter. One hopes this piece, with the right conductors, will appear more regularly in the concert repertoire.