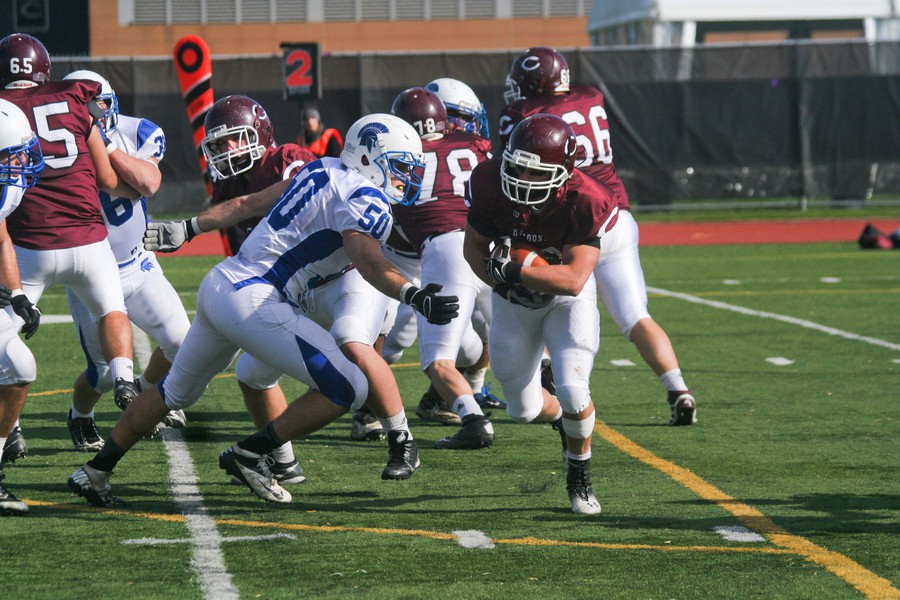 It just wasn’t their day. In front of a Homecoming crowd, the Maroons (4–4) struggled against Case Western (5–3), falling 28–15 on Saturday.

Uncharacteristic and untimely mistakes cost the Maroons, and the visiting Spartans took advantage.

“Case executed better and played better than we did,” head coach Dick Maloney said. “A poor kicking game and offense put our defense in some holes.”

Chicago came out strong, capturing early momentum with third-year fullback Tom Brutofsky’s one-yard touchdown run eight-and-a-half minutes into the first quarter. But after a blocked extra point attempt, the Maroons lost their handle on the game.

“The momentum shifted when we turned the ball over and had two punts blocked all within our own 30-yard line,” third-year quarterback Vincent Cortina said.

Special teams—usually one of the South Siders’ strengths—became their Achilles’ heel on Saturday, allowing two blocked punts and two blocked extra points. Poor kicking and untimely turnovers put the Chicago defense in a tough position multiple times, too. By the end of the second quarter, Case had taken a 21–6 lead on three drives, each of which began in or near the Chicago red zone.

“They had a short field to work with and scored,” Cortina said. “We made mistakes and they really capitalized on them.”

In the second half, Case’s momentum slowed, but Chicago couldn’t muster a comeback. After a Jeff Sauer field goal, which cut Case’s lead to 21–9, the Spartans scored on a six-play drive, effectively putting the 28–9 game out of reach.

Though the stats may not reflect it, Case played a better game. Even though Chicago converted on eight of 17 third downs compared to Case’s three of ten mark, the visiting Spartans had five red zone opportunities to the Maroons’ two. And although Chicago gained 301 total offensive yards to Case’s 249, the offense came at inopportune times.

“We played tough the whole game,” Maloney said, “but mistakes cost us against a very good Case football team.”

Chicago put up one last stand, scoring a touchdown with 54 seconds left in the game on Cortina’s 31-yard pass to fourth-year tight end Brandon Meckelberg. Cortina finished the day 24 for 43 with 261 yards, with one touchdown and one interception. Meckelberg caught seven passes for 141 yards and a touchdown.

“Their defense was centered around stopping [fourth-year receiver Dee Brizzolara],” Meckelberg said. “With most of their coverages fixated on keeping him from making big plays, I was often open downfield.”

Against a strong Case defense, one player’s performance alone was not enough to carry the Maroons.

Chicago continues UAA play and looks to pick up its first conference win at Carnegie Mellon next Saturday at 11 a.m.