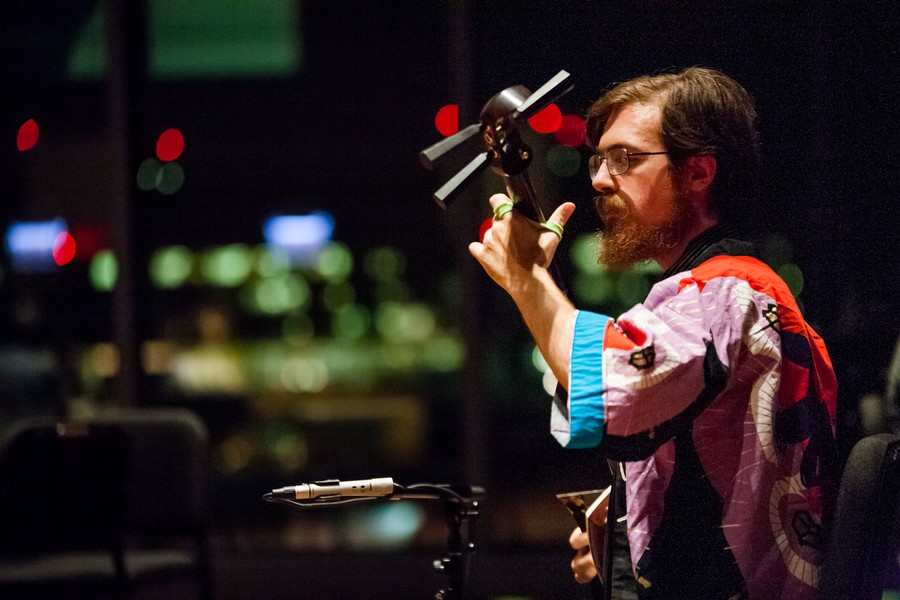 Dim light on maple floors, a grand piano hidden against the glimmering backdrop of the Chicago skyline, and instruments strumming for sound checks all produced a much-needed warmth on the first truly chilly October night of the year. I had just arrived, with several minutes to spare, on the ninth floor of the Logan Arts Center for its bi-weekly Cabaret Series.

Its coordinator, fourth-year Veasna Has, told me that, as there were only five acts—all of them musical or literary that night—slated to perform in the second show of the year, the lineup was a little sparser than normal. The rest of the audience began filing in, and I took my seat. In this very intimate setting, I quickly encountered the sheer breadth of artistic talent that the U of C has to offer. The four musical performances of the night represented a range of styles and genres; each exhibited a well-honed craft, skilled interpretation, and a strong connection with the audience.

Singer Bri Holland, a fourth-year music major, was a tough act to follow. Not only did she demonstrate a vast vocal range, but she has the talent to know how to use it. Elements of pop and jazz to folk and blues blended rather seamlessly in her covers of “Dance So Good” by Wakey!Wakey! and “Other Side of the World” by KT Tunstall. Yet it was in her two original songs—“Gold” and “Weightless”—that her insightful poeticism, as inviting as it is imaginative, was revealed. “It’s a mad moment when you don’t feel a thing,” Holland sang in “Gold,” which explores how jarring heartbreak shatters dreams of the future. The listener eagerly follows her stream-of-consciousness lyrics, wondering where she will end up, anticipating more of Holland’s powerful voice.

Arguably the most unique act of the night was that of third-year graduate student Joshua Solomon with his Japanese shamisen. “It’s like what geishas play, but with a longer neck,” he said, explaining his instrument to me before the show. His was a tribute of sorts to the music of Obon, a Japanese summer festival that honors familial ancestors. Solomon only played through the first verse of each selected work, which typically runs several hours, but this was enough to hint at his deep understanding of his subject matter. His execution was masterful—he hit each intricate succession of notes distinctly, in a manner both rapid and impassioned. Especially memorable was his foray into a style of Japanese musical improvisation: The music’s degeneration from clear to crazed pulsated throughout the audience before screeching to a halt.

The Everly Brothers, a cover band comprised of second-years Marisa Mayer and Dagny Dukach, excelled in putting its own spin on classic songs. In Mayer and Dukach’s first three covers, they sang of loneliness and giving up on life with a nostalgic sweetness that lent the performance an air of romance. Their voices complemented each other’s well—Dukach’s was deep and soothing; Mayer’s lighter and melodic. But it was not until they performed their last piece, “All I Have to Do Is Dream,” that their full emotional range shone through. Their voices carried the melancholic ballad softly, nonetheless passionately, to a lulling finish.

The last singer of the night was second-year Danielle Taiwo. Having only recently picked up the piano, her performance was nevertheless beautiful; her lyrics were witty, catchy, and effortless. Taiwo’s self-professed “experimental” style is a lot like that of Amy Winehouse (one of whose songs she covered) and Regina Spektor. Her two original songs, both about experiences she had on campus, were soulful and poignant, and several times the audience found itself nodding along to the honesty of her lyrics. Between fast bursts of energetic, pop lyrics and a slow, elegant chorus, her execution of “Conversation” was subtly expressive. And in “Unmemorable,” one certainly can’t forget the lyrics “Just so you know / I’m unmemorable” and “I won’t put on a show.” Because she does, and her development as an artist will be interesting to watch.

Although few in number, the night’s literary acts were memorable for their attention to various aspects of childhood. Third-year Michael Reinhard read his short story “Miss Pumpkin USA.” This whimsical, imaginative narrative revolves around a beautiful sonogram of a baby-to-be named Daisy. Convinced of her inevitable destiny to be a star, her father enters her fetal photograph into a pageant for all to behold. Full of references to the quirks and ironies of life, the story is reminiscent of Jean-Pierre Jeunet’s 2001 film Amélie in its whimsical humor and sweet retelling of childhood stories. Its foundation upon the power of a father’s love and its interspersed sparks of metaphoric wisdom—“Every flower worth its petals has been plummed,” writes Reinhard—are where it verily shines.

An unexpected slam poetry delivery by second-year host Shaan Heng-Devan of his original poem “To Write Love on Her Arms” was chillingly good. Heng-Devan was inspired by the organization of the same name, which gives those dealing with depression and addiction an outlet to voice their struggles. Heng-Devan’s interpretation was furious and impassioned, urging the young not to “treat [their] wrists like [he does his] notebook.” He invited them to trade in their bandages for art, leaving a startling impression upon an audience only a few feet away.

The Logan Center Cabaret Series offers a venue for artists of all disciplines and persuasions to perform. Be sure to mark your calendars—if this quarter’s two upcoming shows are anything like this one was, believe me, you’ll want to be there.