Mischief Night pours some sugar and PBR on HPAC 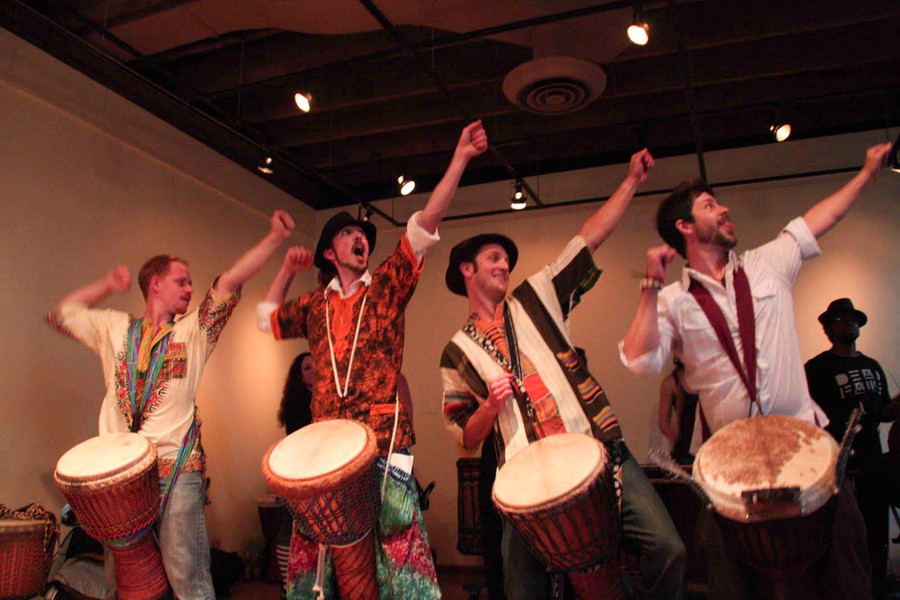 What do a fully functional pool table constructed from a mattress and tube socks, psychoanalytic cocktails, and a drunken blindfolded dance upon a wet portrait of one’s deceased grandfather have in common? Art cred, apparently, as the Hyde Park Art Center proved on Saturday night with its annual installment of Mischief Night, an all-day event honoring the uncanny and bizarre in contemporary art.

From 1 until 10 p.m., HPAC opened its doors to the public for an all-day and nighttime affair filled with live music, workshops, and performance pieces that filled the whole building. Kid-friendly until sundown, daytime events included poetry reading, sculpture making, and Exquisite Corpse, a figural mash-up wall mural that allowed participants to tear off previously drawn body parts and illustrate new ones in their place, creating an ever-changing monster. Pour Your Sugar on Me, featuring artist Sarah Beth Woods, was far and away the most popular performance piece of the day. The artist acted as a canvas for whipped frosting, glazed doughnuts and other baked sweets, which visitors to the museum were encouraged to smear and stick onto her body. Several kids were spotted licking clean their sticky fingers following the half-hour free-for-all, while others cried out in confusion over all the “wasted” treats (distinct among the protests was one boy asking his mother for permission to eat a half-mushed cinnamon roll that lay neglected on the floor). Bowls full of candy were stationed all throughout the building, so getting one’s sugar fix was achieved easily – but perhaps too easily, as evidenced by all the hyperactive costumed children.

As the sun went down, freaks and frights emerged (or stumbled, as the case may be) out from the shadows for some more *ahem* mature artistic delights. At the heart of Mischief Night was ARTBAR, a cash bar that featured an array of devilish concoctions and craft brews, spurring on the tricks and treats of artist and spectator alike.

The second-floor landing served as the hub for Dissolution Communion –or – I Drink, Therefore I am, by Dao Nguyen, a one-night-only interactive art exhibit that featured a round of probing psychoanalysis from the bartenders in exchange for a cocktail to match your current state of mind. Directly beneath that, I was channeling the spirits of such famed artists as Pablo Picasso, Salvador Dali, and a few other 20th century art all-stars in Conversations with Dead Artists. From the personal to the political, the undead spilled the beans in some up close and personal conversations via Ouija board.

Various frights took place throughout the night within the lobby adjacent to me. From 7 to 7:30 PM, visual artist Mikey Rioux created a three-piece portrait of his grandfather with acrylic paint as part of his performance piece, Richard Rioux July 4, 1926 – July 11, 1995. The next half hour featured Mikey blindfolding himself, downing 15 shots of vodka, and dancing upon that same portrait, smearing the paint as he swaggered about to improvised music conducted by The Spooky Action Ensemble.

The Art of Drinking Alone (+ Karaoke) is the Highest Form of Art, featuring performance artist Alex Rauch decked out in a neon tracksuit, mullet wig, and sunglasses, was more or less what its title suggests. For five hours straight, the artist continuously pulled from his stash of 100 cans of PBR and sang karaoke whose influences (The All-American Rejects, Fall Out Boy, etc.) made the middle schooler in me squirm, overcome with the uncanny notion that I had suddenly been transported back to a sixth grade dance in some school gym. The awkward and cramped dark room, complete with voice-cracking vocals and the lingering scent of body odor, definitely added to that aura.

Toward the end of the night, and many, many beers later, the artist stumbled, fell, might have fallen asleep, became markedly tone-deaf, and yet belted out the lyrics to “Swing, Swing” with a screeching that was almost profound, and definitely applause-worthy. Lasting until Mischief Night’s formal end, with only a few breaks to search for unopened cans of beer and to stumble to and from the bathroom, Rauch certainly held up his act well. The explicit goal of the performance piece was to put pressure on the societal expectations of when and where such acts of vocal catharsis might be permitted – and probe, he did.

From interactive figure drawing to dust-bowl era dancing by Chicago-based crew Phoenix Rising, from ghoulish story telling activities to group channeling of undead artists, Mischief Night very eclectic series of events all seemed to orbit the same objective. Coming together to explore to navigate the uncanny underbelly of contemporary art, performance pieces and visual work alike strove to engage artists, spectators, and specters for a day and night of artistic exploration. Social boundaries were transgressed, dug up and re-examined with a bountiful inclusion of candy and cocktails, all in the name of art.