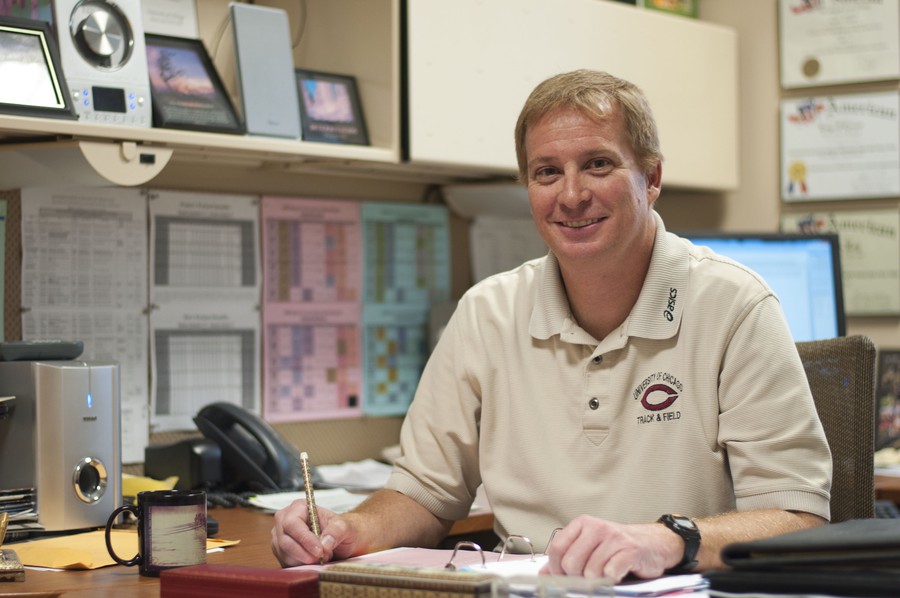 Chicago (22–4) topped Johns Hopkins (18–6) 5–1 in Monday’s national quarterfinal in Cary, N.C. But the score does not tell the entire story.

While fourth-year Jennifer Kung and third-year Linden Li gave the Maroons an early team lead with an 8–5 win at No. 2 doubles, an 8–6 loss by first-years Kelsey McGillis and Megan Tang at No. 3 evened up the score.

A win at No. 1 doubles would give the edge to the winning pair’s team heading into singles.

As the new school year gets under way, the most important things on students’ minds range from “When is Amazon going to ship my books?” to “How can I switch into Drama?” But with the most important part of their season about to begin, the Men’s and Women’s Cross Country teams’ thoughts may, understandably, be elsewhere. As preparation for regionals heads into its final month, the Maroon sat down with head coach Chris Hall to discuss his teams’ prospects for the remainder of this promising season.

CH: I am really pleased. Our women right now are undefeated against DII and DIII competition—we have only been beaten by scholarship schools so far. I feel like the women have a very deep and competitive squad. Our guys had a little stiffer competition from DIII. A school like North Central, which we have seen a couple of times, is the defending national champion and the number one team in the country right now. I feel great about how the men competed this past weekend going up against a predominantly DI field, including the defending DI national champions and currently number one ranked team, the Wisconsin Badgers. We’re not embarrassed to be beaten by teams like that. Those are great squads.

CM: Last year the men’s team finished the year ranked 32nd and is now currently 20th, while the women’s team was ranked 24th and is now 21st. To what do you attribute this growth and national recognition?

CH: You know, to be honest, I think our teams were under-ranked last year. The NCAA ranks teams that advance to the national meet higher. Our men’s team is in a ridiculously tough region, where only the top five advance, and so they missed out on nationals. The women made nationals but were missing some key parts from injury last year that have come together this year.

CM: In two weeks the teams travel to Wisconsin for the Wisconsin–Oshkosh invitational. Take us through the preparation the teams will go through to get ready for the meet.

CH: I never considered cross country coaches to be Xs and Os kind of guys. We’re just going to try to train hard, stay focused, and work on achieving perfect running form. It will be nice, though, to see teams like Wash U there. It’s been great to run against teams like Wisconsin and Purdue, but we don’t know those squads—we barely know what colors they wear! Wash U, though, we look forward to seeing and getting a feel for.

CM: Speaking of Wash U, several UAA teams also look to have strong squads this year. How do you think the men’s and women’s teams will stand up to our rivals at UAAs?

CH: The UAA is stacked as a conference. Something like five or six of the UAA teams are ranked in the top 25 consistently. But we have a goal, and that’s to win the conference title. Last year, we came in third on the men’s side and fourth on the women’s. We’ll have to run some great meets, and we recognize that other teams might have great meets too, but not too many teams are going into UAAs with the plan to win, like we are. And if we lose while running a great meet, we won’t be too upset with ourselves.

CM: Regionals (national qualifiers) are just over a month away. What can Maroons fans expect on both an individual and team level?

CH: I don’t know what you really mean by an individual level. Sure, individual qualifiers are great, but we would rather have the whole team go to the national meet. Our goal is to qualify both the men’s and women’s teams for nationals. We have never had both go in the same year, but we hope to change that.

CM: If Julia Sizek and Billy Whitmore line up against a cheetah, how much trouble is that cheetah in?

CH: Cheetah? I would say they’re the ones in trouble! Wait, is it a distance race?

CH: Oh, in that case that cheetah is in for a whole lot of trouble. It might beat us around the first corner, but we’ll pass it up. Those things really are fast though!