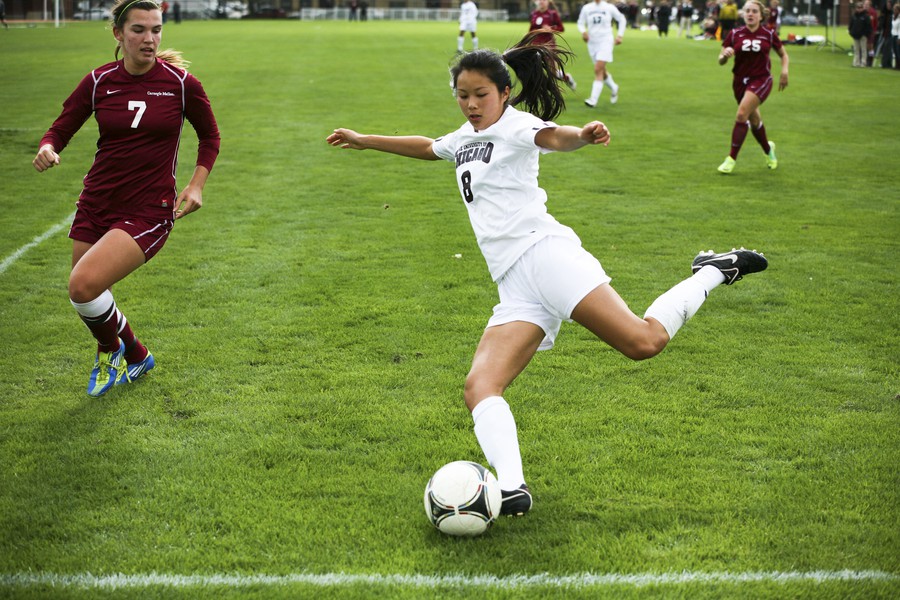 There would be no late drama for women’s soccer on Saturday afternoon, only disappointment. A 2–1 loss to Carnegie Mellon (7–2–1, 1–1–0) left the Maroons (7–4–0, 0–2–0) with two losses in their first two conference games, and, whereas last week’s loss was an encouraging performance against a very strong Emory side, this game will feel as though it had slipped away.

In a very even match, Carnegie was able to do that little bit extra.

It was a cagey first half. The Tartans were perhaps the more assured team in possession, but Chicago had the better chances, with second-year Sara Kwan going on a number of dangerous runs in and around Carnegie’s penalty area. The best chance of the half fell to first-year Julia Ozello, who was thwarted by Carnegie goalkeeper Anna Albi after first-year Anna Goddi played her through.

The Maroons would go on to regret squandering their first half chances, as Carnegie’s Savina Reid scored twice in the space of two minutes—first, with a chip over second-year goalkeeper Jacinda Reid, and moments later with a near post header on a cross from Brittany Couture—to give her team a commanding lead in the 58th minute.

The South Siders pulled back a late goal in the 87th minute when third-year Natalia Jovanovic scored on fourth-year Brigette Kragie’s assist, but it proved only to be a consolation. The Tartans held off a late surge of Chicago pressure to see out the victory.

It may have taken almost an hour for those little things to add up, but add up they did, and the Maroons must now concentrate on putting those mistakes right.

“We turned too many balls over, it’s fair to say, and Carnegie won the 50-50 battle more consistently than we did,” assistant coach Stroud said. “We still have seven games to play. We have a big double weekend coming up so we just have to try to improve and get better everyday. That’s one of our general themes for the season: Continue to improve on a day-by-day basis.”

Chicago’s focus will now turn to the weekend, when it will see two conference rivals (Brandeis and NYU) in the space of three days. Things may not look too bright for the Maroons, having lost their first two games, but there is an understanding that in order to move forward they must put those games behind them and look ahead.

“It’s going to be difficult to win conference because a lot of teams have a win and a draw. We can’t worry about them. The only thing we can do is put ourselves in a position to win games,” Stroud said. “Brandeis is 10–1–1 so they’re playing with a lot of confidence. We have to be prepared to battle on Friday against them and then just look at one game at a time after that.”