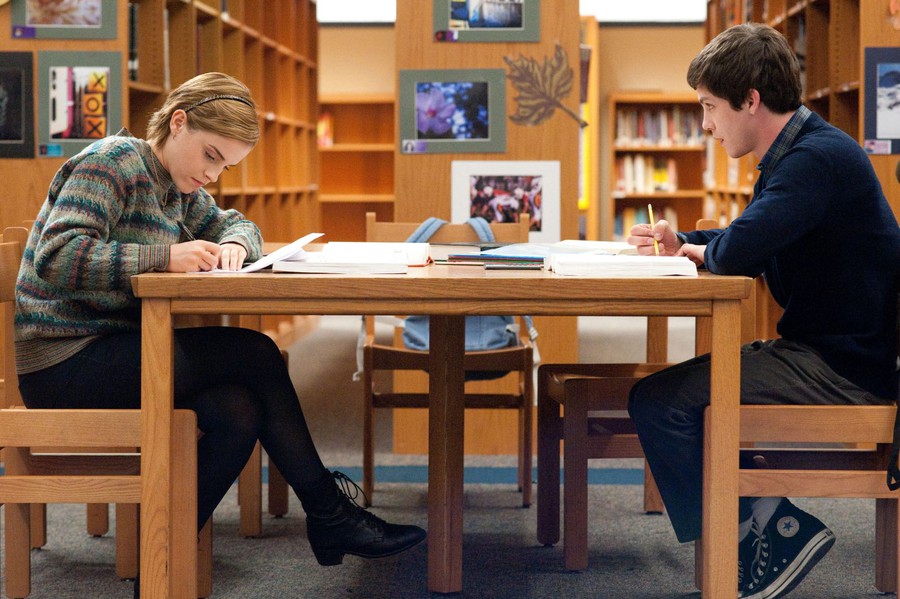 It’s a problem that lovers of cinema and literature encounter with increasing frequency: How do you turn a poignant book into a powerful movie? The Perks of Being a Wallflower, which opened in select cities on September 28, is the latest proof that this issue can be resolved.

Stephen Chbosky, who wrote the 1999 novel of the same name, both directed the film and wrote its screenplay. The result is an unusually pure translation from page to screen that captures all of the humor and raw emotion that fans of the novel will recognize and embrace.

Narrated through a series of letters to an anonymous recipient, the film chronicles the tumultuous and enlightening freshman year of high schooler Charlie (Logan Lerman), an introverted brainiac who’s always been a little socially out of step, as he navigates football games, homecoming dance after-parties, and performances of The Rocky Horror Picture Show. He is guided through these rites of passage by Sam and Patrick (played by Emma Watson and Ezra Miller), stepsiblings and best friends. “See, Charlie,” Patrick says as he leads him into a basement party, “this is what fun looks like.”

The holy acting  trinity of Lerman, Watson, and Miller carry the film as a whole. Lerman’s delicate and genuine characterization of Charlie is at times heartwarming, at others painful. Watson, in her first major post–Harry Potter role, shines as Charlie’s love interest, a girl who carries a significant and tragic personal history of her own. Yet the most remarkable performance of the three is Miller’s. Miles away from his blood-curdling portrayal of a school shooter in We Need To Talk About Kevin, Miller pulls off the part of a dynamic, romantically-wounded teenager coming to terms with his homosexuality in a way that is both elegant and forceful. The friendship among the three of them is the lifeblood that pulses throughout the film.

Since Perks is set in the early ’90s, it is highly appropriate that mix-tapes become an important motif throughout while simultaneously setting the film’s tone. While listening to a mixtape originally made for his older sister, Charlie becomes enthralled with the song  “Asleep” by The Smiths to such a degree that it takes on a life of its own, appearing in the score and in conversation throughout the film. At the homecoming dance, when the song “Come On Eileen” by Dexy’s Midnight Runners comes on, Sam exclaims, “Oh my God, they’re playing good music!” Other memorable soundtrack picks include “Could It Be Another Change?” by The Samples and David Bowie’s “Heroes.”

In addition to the joy and simple romance of dances and mixtapes, the film deals with profound and troubling issues of alienation, self-esteem, and nostalgia. At the start of the movie, viewers learn that Charlie’s only friend from middle school committed suicide the previous spring. Sam’s

musing, “Why do I and everyone I love pick people who treat us like we’re nothing?” prompts Charlie’s tragically true response: “We accept the love we think we deserve,” borrowed from his beloved Advanced English teacher (Paul Rudd). Compounded with the tragedy of his best friend’s suicide and his unrequited love for Sam, the film also reveals that Charlie’s “favorite person in the world,” his Aunt Helen, died in a car accident on his birthday when he was a child. The consequences of these memories, and the truth that is eventually revealed, lead to the most tragic and shocking realization of the film.

The Perks of Being a Wallflower is provocative, painful, funny, and genuine. Its beauty lies in the thoughtful interpretation of a beloved novel and the spectacular performances from its three main characters. It deals with complex issues without feeling contrived, and begs reflection and introspection from its viewers. If it’s true that, as Charlie’s final letter at the conclusion of the movie says, “there are people who forget what it’s like to be 16 when they turn 17,” then perhaps this film serves as a bittersweet but much-needed reminder, no matter how removed from high school you may be.