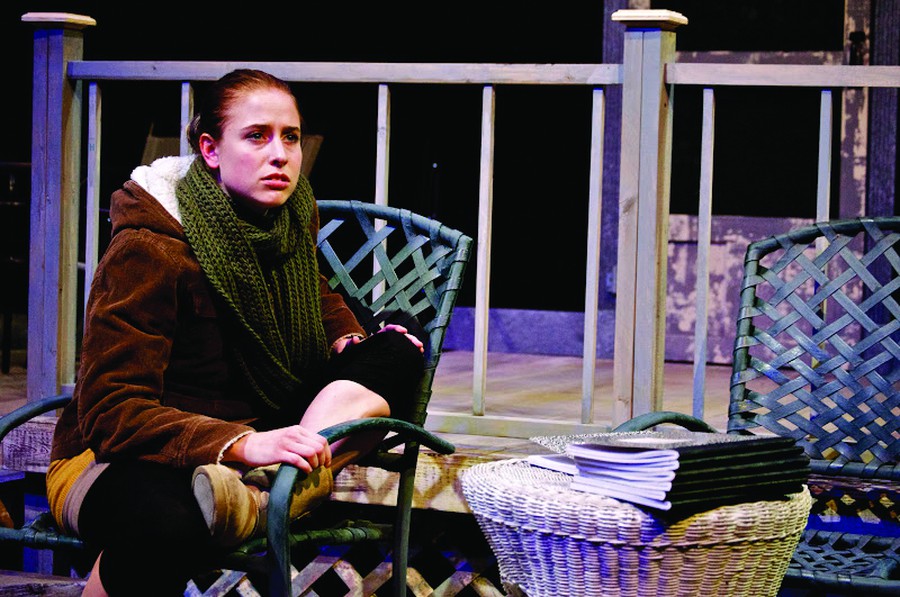 When I first read the description for this fall’s production of Proof, I expected an action-packed theatrical adaptation in the vein of Sylvia Nasar’s unauthorized biography of Nobel laureate John Nash, Jr.—an assumption inspired, no doubt, by Universal’s 2001 film A Beautiful Mind. There’s no denying the similarity between the premises of the two works. Both concern the personal and familial struggles of mathematical geniuses whose groundbreaking careers are cut short by the onset of psychological instability. Proof, however, eschews the bells and whistles of a film drama in favor of an elegant account of a gifted daughter, doomed by her father’s legacy.

Where A Beautiful Mind plays up its action sequences and other more thrilling aspects, professional director Audrey Francis (co-founder and owner of Black Box Acting, and current teacher at the School at Steppenwolf) utilizes an interpretation of U of C alumnus David Auburn’s play that draws the audience in with its visual restraint. Viewers surround a bland, wooden porch on three sides, their proximity allowing for optimal use of Logan’s black box theater as a tool for developing intimacy. Lighting designer Matt Gawryk employs subtle changes in hue to great effect; audience members can practically feel the bitter Chicago air as the stage takes on a frosted, foggy appearance in winter scenes, yet are transported mere moments later by warm, autumnal tones. Jenny Pinson’s prop selection is no less sophisticated. Her items are practical and never intrusive or excessive, ensuring that those vital to the story are memorable but do not detract from the onstage action. In the end, all technical elements simply serve to focus audience attention continually on the actors themselves--and this focal point does not disappoint.

Fourth-year Molly Miller stars as Catherine, the daughter of mathematical prodigy and U of C professor Robert (Steve Pickering). Miller succeeds in communicating Catherine’s many frustrations and complexities through a vast and masterful range of emotions. She handles the each scene with poise, unless, of course, the moment calls for a less buttoned-up display of emotion. She shows special strength in shocking changes of mood, although sometimes the intensity and dramatic tension between her character and that of her sister, Claire, is lost in the former’s refusal to commit to one sentiment.

The fact that Miller plays opposite a supporting actor who nearly steals the show also attests to the well-distributed skill of the featured students: fourth-year David Federman embodies an unintentionally but irresistibly charming graduate student named Hal, whose demeanor is enhanced by Nathan Rohrer’s costume designs. Federman exhibits equally impressive chemistry with all of his fellow actors, providing comic relief (most of which is particularly relevant and entertaining for U of C students, as Auburn doesn’t hold back from poking fun at the school’s academics, graduate students, and rivalry with Northwestern) as well as endearing moments of genuine vulnerability.

Besides Miller and Federman, Francis employs the professional skill of Pickering and Clifford, who is new to UT. Both shine in their supporting roles, with Pickering convincingly portraying the dissatisfaction and distractions of a mind no longer functioning highly, and Clifford channeling the fear and confusion of an older sister unsure of the right course of action to take to support her family.

At its core, Proof is an intriguing story, though some elements of this production turn out to be perhaps more predictable than the plot twists of A Beautiful Mind. Still, viewers are left in serious contemplation over the obstacles faced by great academics—irreproachable geniuses, but unstable ones—whose lives are no less complicated than the equations they seek to solve.