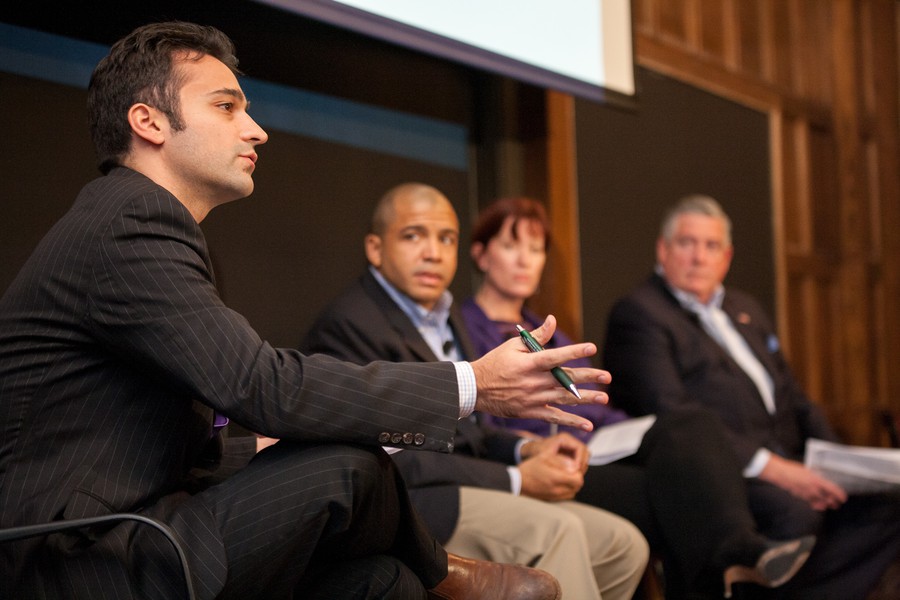 Illinois State Senators Heather Steans (D- 7th) and Kirk Dillard (R- 24th) and Alderman Will Burns (Fourth Ward) discussed the impact and implications of the 2012 election results for local and state governments at a panel hosted by the Institute of Politics on Saturday.

Moderator Paris Schutz from WTTW, Chicago’s local PBS station, asked questions ranging in focus from the United States as a whole to Springfield and Chicago.

All three panelists agreed on the dire need for changes in education funding, pension reform, and Medicaid. Due to failed attempts at pension reform, Illinois’ credit rating was recently reduced to the worst in the nation by Moody’s, Dillard noted, which means getting assistance will be much harder due to heavier interest rates on loans the state receives.

Gridlock is unlikely to be a barrier these next two years: For the first time in Illinois state history, the Democrats achieved a super-majority, winning three-fifths of the seats in both houses.

Steans recognized the urgent decisions her party must make with their unprecedented control. “It’s unsustainable” she said, referring to how pensions are currently funded in Illinois. “We’re going to [reform it] because we just don’t have a choice.”

She also recognized the inevitable spending cuts. “There will be less funding for education and Medicaid, which are the biggest expenses for the state right now.”

The Illinois GOP also has difficult decisions ahead, though for an altogether different reason. State Republicans lost a combined 12 seats this election cycle, giving them no substantive voice in the deliberations ahead. “The term bloodbath has been used,” Dillard remarked about his party’s situation.

Despite the current circumstance, all panelists agreed that bipartisanship is vital for effectively alleviating the financial situation, and urged young people in attendance not to lose hope in state politics.

“There was a guy named Barack Obama running for State Senate talking about a different way, and I was like, oh, maybe he’ll do something,” Burns said.