MCA pulls a chair up to Bivouac 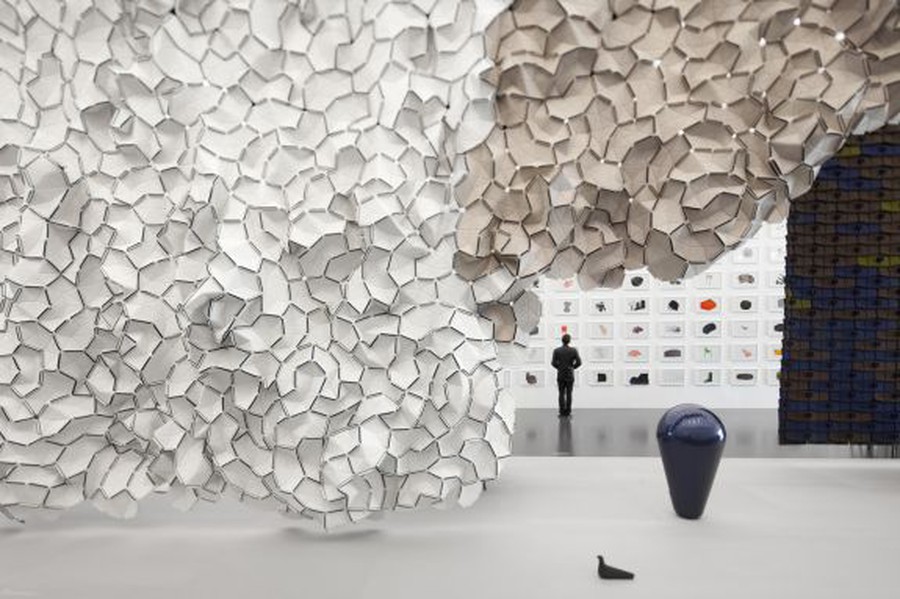 A bivouac is a temporary encampment constructed from the raw materials of the environment, often in open air. One might not immediately assume that this definition could be used to describe furniture, yet a new exhibition at the Museum of Contemporary Art Chicago does just that. Ronan and Erwan Bouroullec: Bivouac presents an innovative collection of interior design pieces that blur the boundaries between organic and man-made, abstract and practical, and, more fundamentally, between furniture and art.

The alluring, disorienting work of the well-known French Bouroullec brothers distorts and segments recognizable forms in an attempt to reduce familiar objects, such as bowls and bottles, to their absolute minimums.  Simplicity emerges in the show as an artistic goal that is almost synonymous with perfection.  Sleek aluminum kitchenware appears from between the clean lines of simple lamps, the neat edges of angular mirrors, and the smooth legs of chairs.  Styles like those featured in “The Aïo Collection,” in which the artists have dramatically streamlined the designs in the interests of mass production, aggressively test the border between decorative and functional.  However, no piece is abstracted past the point of utility.  Though a vase might look like the sloping body of a car, at the end of all the analysis, it still serves to hold a sprout of flowers.

At the same time that the pieces in Ronan and Erwan Bouroullec: Bivouac strive to attain almost inhuman perfection, they also serve as imitations of nature, and thus acknowledge the beauty in imperfection. The most memorable pieces in the exhibition exemplify natural flaws—cascading from the ceilings, numerous massive curtains of material, ranging from plastic clips, to branch-like hooks, to flexible fabric, hang in wonderfully asymmetrical formations. “Clouds,” an enormous screen of felt-like material bent in irregular yet coherent patterns, is as aggravating as it is pleasing. It startles in both size and weight, and the natural cadence of its movement is inviting. Similarly, across the gallery, a curtain of delicate, interweaving forms overwhelms with its natural, swimming intricacy; the work is appropriately called “Algues” (French for algae). Exhibition organizers describe the piece as a moment in which “the rigors of industrial production and the chaos of nature come together seamlessly”—an integration that extends past the edges of this particular curtain and courses throughout the entire exhibition with a tangible pulse.

In addition to the tension between industrial perfection and natural imperfection, the work presents a conflict inherent in the very form of interior design: the boundary between art and furniture (or rather, between “object as subject” and “object as object”). Each piece, because of its location in a museum setting, exists as a subject of observation, meant to be appreciated from a distance as a work of art in its own right. However, at the same time, the exhibit reminds viewers that they are in fact looking at pieces of furniture, intended for regular human use (organizers from the Centre Pompidou-Metz, along with MCA Chief Curator Michael Darling, made it a point to allow visitors to interact with some of the pieces—yes, you can touch!).  At the very moment viewers become absorbed in the artistic nature of the pieces, they are confronted with advertisement-like descriptions that thrust them into a commercial mindset: “This simple cast-aluminum table is designed for flexible use and can also be positioned outdoors. Its folding top allows it to be stowed away efficiently when not in use.”

As I sat on one of the Bouroullec brothers’ chairs, beneath the light of a Bouroullec lamp, playing with iPads displayed on a Bouroullec table, situated atop a Bouroullec carpet, I found myself realizing that the question of “furniture or art” had been subverted. The pieces in Ronan and Erwan Bouroullec: Bivouac are as abstract as they are practical, as alien as they are organic. The works defy categorization, and it is from this constant movement between forms, this fluid disorientation, that the work derives its strength.

Ronan and Erwan Bouroullec: Bivouac will be at the Museum of Contemporary Art Chicago through January 20th.