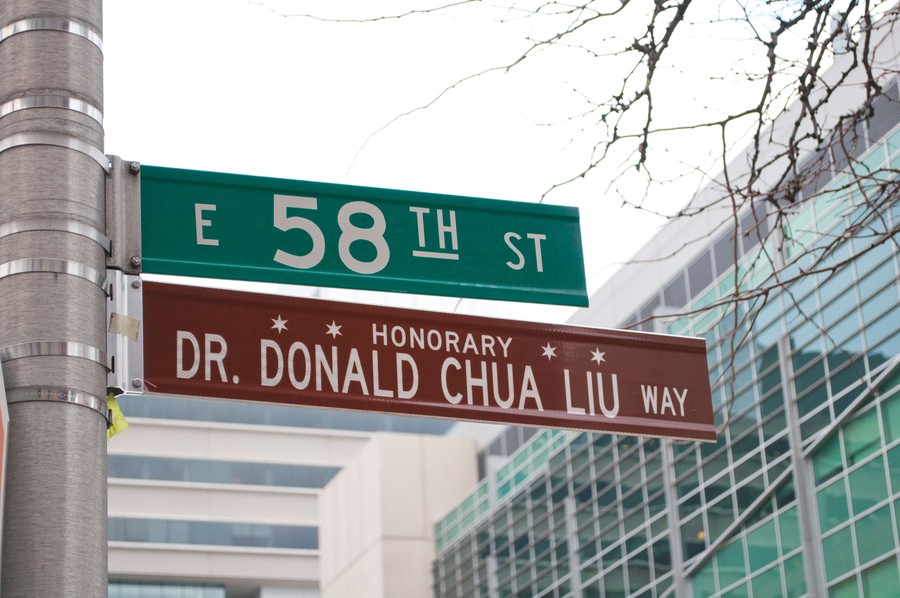 Since the death this summer of Donald Liu, Surgeon-in-Chief at the University of Chicago Medicine Comer Children’s Hospital, the U of C community has been both mourning him privately and commemorating him publicly.

Remembered by many for his tireless work ethic and exuberance for life, Liu drowned on August 8 while rescuing two children caught in a strong current in Lake Michigan. As a doctor, he specialized in minimally invasive surgery, was on-staff at a number of Chicago hospitals simultaneously, and was a lecturer in China, where he helped foster collaborative research.

Due to Liu’s extraordinary impact on the University community, a block of East 58th Street in Hyde Park near the hospital has been since renamed “Honorary Dr. Donald Chua Liu Way” in his memory. The sign went up on October 12, two days before the Comer Classic, which was dedicated to Liu as well. The Comer Classic is a yearly 5-K to help raise money for pediatric research.

According to Alderman Leslie Hairston, the idea for the sign originated in her office and they received no pushback when introducing the ordinance at city council.

“Dr. Liu and his family are well known in the community and when something tragic happens like this, we often try to do something in their memory,” Hairston said.

John Alverdy, the executive vice-chair of the Academic Affairs Department of Surgery at the U of C hospital, knew Liu for years prior to his death. This summer, they had been working together for four years on research regarding the behavior of bacterial communities in the gut. According to Alverdy, Liu applied for and received a National Institutes of Health grant to study the different characterizations of the microbiome of both breast-fed and formula-fed infants, and treatments for a disease called necrotizing enterocolitis in the latter. Alverdy has since been shifted to the Principal Investigator for the study.

Liu is survived by three children and his wife, Dana Suskind, the director of the Pediatric Cochlear Implantation Program at the children’s hospital. Beth Suskind, the sister-in-law of Dana Suskind, who also works in the program for hearing-impaired children, described Liu as a  “doting” and “devoted” husband and father.

“He operated on my daughter and I wouldn’t have it any other way,” Beth said. “It made that experience a million times easier than it would have been had I known Don was not in the operating room with her.”