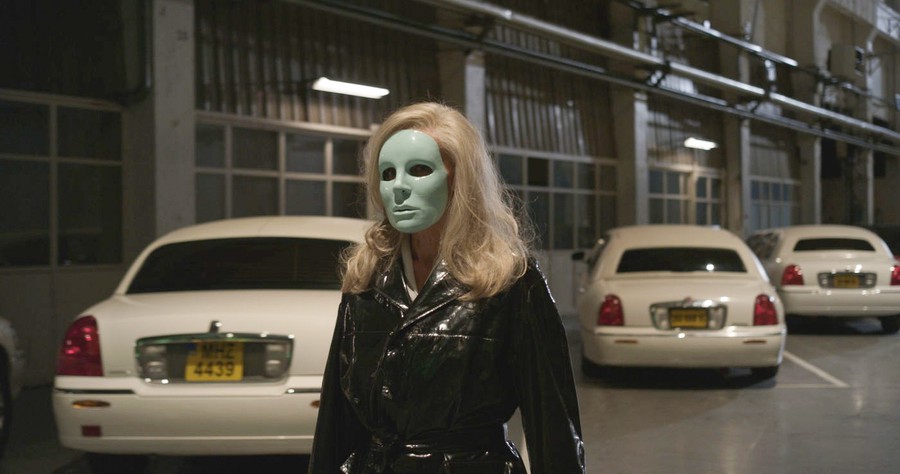 M. Oscar (Kylie Minogue) just can’t get this mask off of her head in Léos Carax’s Holy Motors.

Only the eye and the passion of a true movie fanatic could have pulled off this kind of stunt. Laden with an often disjointed yet fantastical array of autobiographical tidbits, jumbled film references, silent movie clips, digital animation, slapstick comedy, and the occasional musical number, Léos Carax’s Holy Motors is a cinematic love letter to the dying art of film. Carax, in documenting a day in the life of Monsieur Oscar’s many parallel existences, reinvents the world as one would encounter it in a dream—absurdly whimsical, oddly funny, yet deeply poignant and truthful.

Holy Motors, the French director’s first film since 1999, is rumored to be a mash-up of all the projects Carax did not get to see through to completion; it is, perhaps, the diversity and richness of the discarded endeavors that makes the final cut a masterpiece. A constantly transforming yet impressionably fluid Monsieur Oscar (played by Denis Lavant, who has appeared in the majority of Carax’s movies), and the wonderfully no-nonsense, nostalgic chauffeur, Céline (Édith Scob), come off as remarkably natural in their roles. Brief yet strong supporting roles include the apathetic kidnapped supermodel Kay M (Eva Mendes), Oscar’s disapproving boss (famed French actor Michel Piccoli), and fellow appointment-filler Eva Grace (songstress Kylie Minogue).

Navigating the streets of Paris in the back of a white limousine (the “holy motor” itself), Oscar, the master of disguise, jumps erratically through a series of random, purposeless, and disconnected roles. His perplexing “appointments” include a haggard old woman begging on the streets and the subject of a series of virtual physical exams. There is also a leprechaun who travels the Parisian sewers, frolicks through the cemetery, devours flowers, bites off fingers, hoards a supermodel in a cave, and generally disturbs one’s understanding of just where a movie should go. Yet this is just the tip of his exploits, since Oscar somehow manages to murder himself—twice. “You should have deliberately not done it,” he reproaches himself.

Yes, he is ubiquitous. Yes, he can completely alter himself in a matter of minutes, as he moves from one destination to the next, shifting not only his appearance but also the nature of his character. Yes, he shakes off each identity with ease. But what makes him truly remarkable is that, in the moments between his transformations, Oscar embodies fundamentally human conundrums: how to see, how to act, how to live. For all his flamboyant imagination, he is still the sensitive wayward soul that wearies of his lonely life. It is for this reason that he can play the roles humans assume every day: the dying uncle, the frustrated father, and the beaten man. Lavant’s greatest achievement is finding that connection in the fray.

Carax’s dynamic directing only amplifies this bond. He crudely captures the carnal and the intimate through the face and body of a man, and juxtaposes it with the perennial polish of Paris. He knows just the right moment to focus in sharply on the visage of a desperate woman and when to remain at a distance to observe a family stare at the sky through their window. He frames the nonsensical in a very deliberate and symbolic way, so as to affect a feeling of reality.

Holy Motors is not fully dreamlike, nor completely comprehensible. It invites the individual to follow the rambling thing—whatever it may be—as it unfolds. It evolves from elated and fun to somber and reflective—a shift that is itself indicative of something within us. Ultimately, though, it challenges the concept of a film itself: Should it be tied to tradition, or something more organically linked to the human state?