At Lookingglass, millenia-old story’s still got the muse

For its 25th anniversary, Metamorphoses revisits the Lookingglass stage to captivating and nuanced effect. 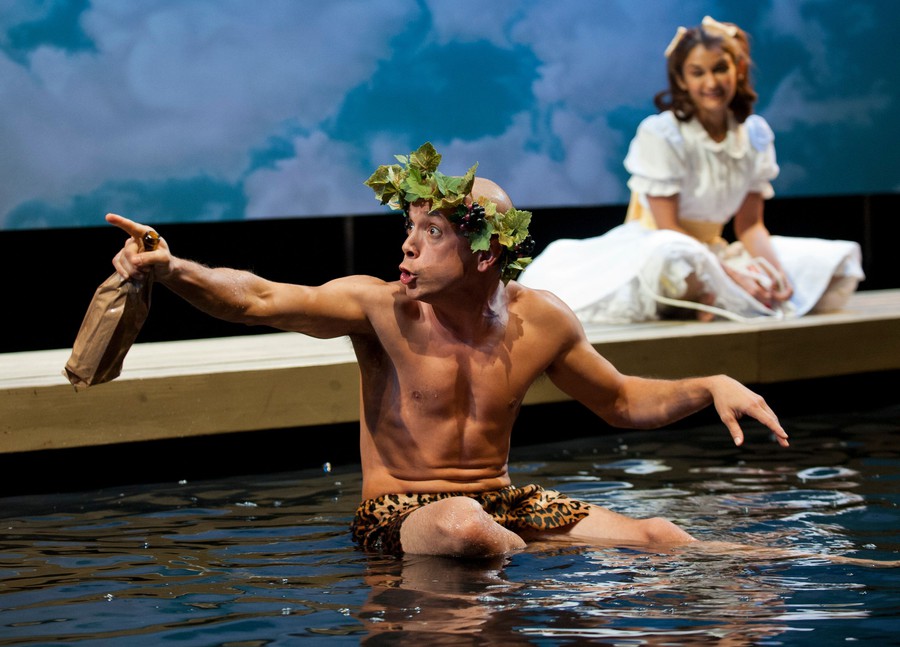 Like most great works, one sees Ovid’s Metamorphoses through a new lens every time one encounters it, whether as a written piece or a theatrical production. Of course, it helps when a visionary playwright like Mary Zimmerman transforms familiar tales into fresh scenes as effortlessly as rotating a kaleidoscope, creating a dazzling new interpretation of the classic in the Lookingglass Theatre Company’s new show Metamorphoses.

This iteration of Metamorphoses highlights the fine line between greed and love. These twin emotions seem to arise from a commonly rooted passion, and yet they could not be more different. The play opens with the tale of Midas (Raymond Fox), whose wish to turn everything he touches into gold is granted. Unfortunately, he had forgotten that he sometimes hugs his daughter (Anjali Bhimani). His fetishization of money eventually illuminates the people he truly cares about, but perhaps it does so too late. The last tale of the play highlights the love of Baucis (Anne Fogarty) and Philemon (Lawrence E. DiStasi), who demonstrate their love of the stranger through hospitality and in exchange are granted the greatest gift one can give two lovers: the ability to die at the same time.

Other viewers have their choice of salient themes, such as the dichotomy of revelation and deception, the travails of youth and aging, and, of course, the possibility of transformation. At times, particularly in the tale of Eros (Doug Hara) and Psyche (Louise Lamson), Zimmerman can become somewhat didactic, though the audience is so spellbound by the visuals of that scene (and all scenes) that a bit of explaining barely breaks the hypnotic aura of the show.

The genre of readers’ theater is often fraught with poor translations and awkward shifts of medium. However, Metamorphoses is especially notable for its fluidity and expert use of stage. For example, the personification of characters like Hunger, who wears dark pantyhose over her face and cloth talons on her hands and latches onto her victim, proves effective and haunting. Another excellent translation includes the myth of Orpheus (Usman Ally) and Eurydice (Lauren Orkus), which Zimmerman tells twice, first by Ovid from the point of view of Orpheus and then by poet Rainer Maria Rilke through the eyes of Eurydice.

Metamorphoses is perhaps best known for its much-reproduced innovation of a full pool of water on stage, and this revival does not disappoint. The bottom of the pool is painted black and appears as dark as the waters of the Aegean at night for most of the play. The pool is deeper than some theatergoers might expect and creates dramatic waves during several scenes—so much so that most of the audience is provided with large towels.

Costume designer Mara Blumenfeld fashioned garments that further emphasize the mythical cloth of the work. The pieces, which interact with the water as much as the characters do, range from men’s scarlet culottes to a full skirt lit with Christmas lights. Zimmerman’s artistic sense shines through the mélange of romantic, classic, and Bohemian attire. Audience members will find themselves wondering what sort of magic must occur each night to restore the clothing to its original splendor.

Lookingglass Theatre Company’s redux of Metamorphoses in honor of its 25th anniversary speaks to the true hallmark of the theater: the aesthetic audacity that underlines the power of live theater. Metamorphoses combines several of the elements of other works that put this Tony Award–winning company on the map: for example, The Jungle and The Arabian Nights. Of course, perhaps its main purpose is to promote Zimmerman’s retelling of The Jungle Book in June 2013.

Perhaps Zimmerman’s talent is best highlighted by the fact that novice theatergoers might not even realize that Metamorphoses is a reproduction. As difficult as it is to keep ancient stories feeling novel, keeping theater productions fresh through the new millennium requires more than a little inspiration from the Muses.

Metamorphoses runs at the Lookingglass Theatre through December 16.