Logan’s walls are worth a thousand words 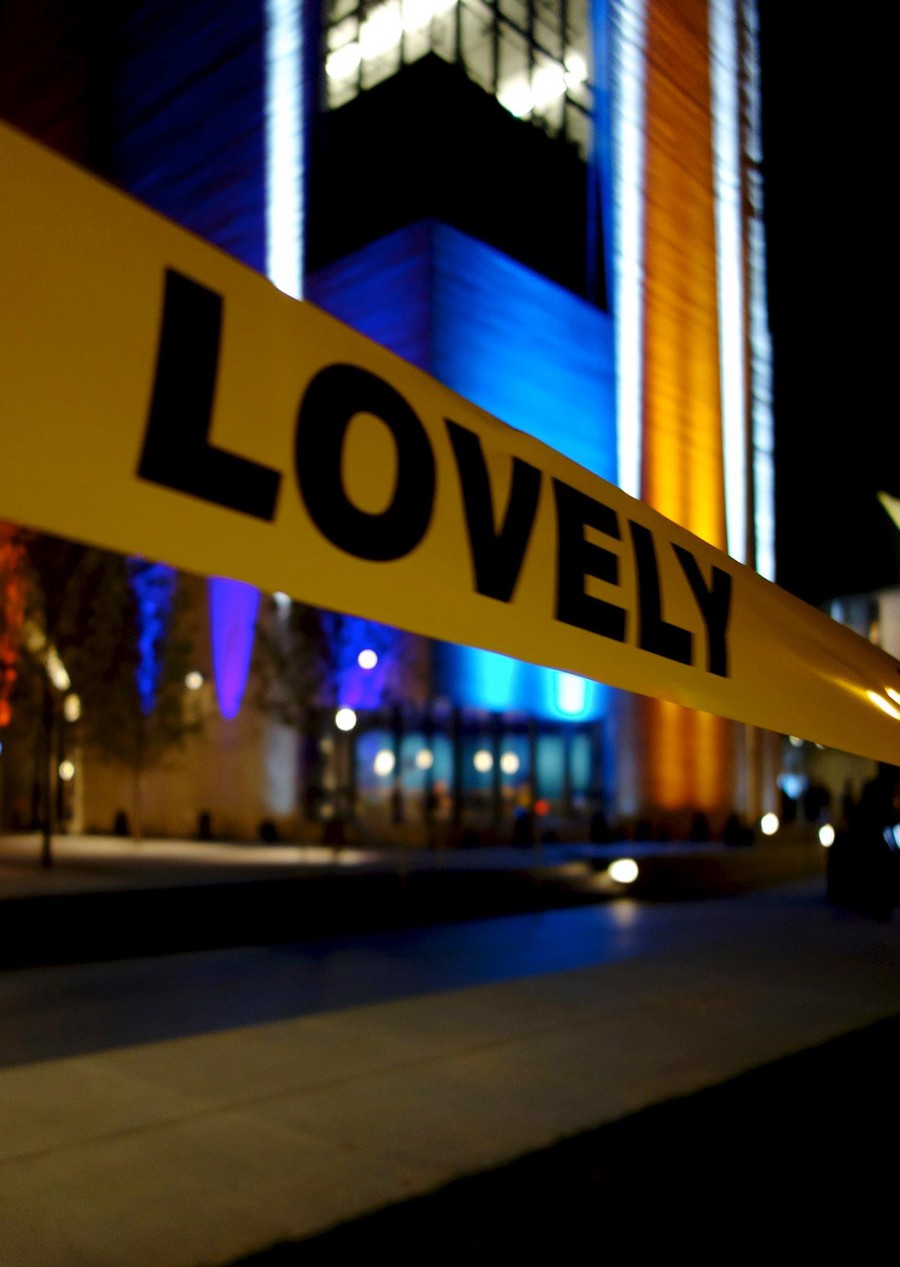 Courtesy of The Reva and David Logan Center for the Arts

If you have visited the Logan Arts Center recently, you may have noticed the strange rectangular planks on the walls of the north staircase, which look like an exploded woodworking project. You may have stopped to read the random plaques that seem to be making small, subtle observations to passersby. “It’s an odd feeling when you trigger instinctive behavior—like nursing—in someone. It’s funny to be in his presence while a different part of the nervous system takes over and his eyes get strange,” one reads. Or you may have been enlightened by the quote in the Gidwitz Lobby that gives careful instructions on how to throw a good cocktail party—for instance, you should not “try to offer more than three kinds of drinks without a professional bartender.”

All of these works, unrelated though they may seem, are part of the Logan Center’s new exhibition, Wall Text, the culmination of a conceptual art project that began in the 1960s, run by the University’s Department of Visual Arts. Curated by MFA alum Zach Cahill and Visual Arts Program Curator Monika Szewczyk, the exhibit seeks to reveal the ways in which visual art is inseparably related to and, in many cases, enhanced by textual or language-based art. While wall text is traditionally seen as an adjunct that accompanies the main pieces of a gallery and merely serves to explain its historical background or context, this particular exhibit highlights the text itself as the main work, thereby encouraging viewers to question the ways in which a difference of focus changes the artistic experience.

Wall Text poses other questions about the relationship between text and image. “The old adage ‘A picture is worth a thousand words’ has always held a curious attraction for me. What does that mean? Where do we make a clean division between words and images?” said Cahill of the exhibit, which clearly seems to pose more questions than it answers through text.

The most striking element of this exhibit is its unique use of wall space. One look at the Berlin Wall or the Great Wall of China makes it easy to conclude that walls are used to divide and separate both space and people. However, just as Berliners impregnated the Berlin Wall with messages of unity, text and art have the enormous power of invading these entities of separation and, in so doing, open the space up for dialogue and public discourse. Thus, as the exhibition booklet states, Wall Text is “a pairing of opposites: a method for drawing together and splitting apart; a form of communication and resistance.” Indeed, the exhibit unites the walls of the Logan Center as a microcosm of creative thought and activity, since it makes use of the entire building as a gallery, from the lower level all the way up to the eighth floor.

Although the exhibit’s title implies the exclusive use of text, the exhibit features much more than words on a wall. William Pope.L uses vinyl on the eighth floor windows to create a haunting image of a precipitous cliff. Buzz Spector uses yarn on cotton to create an image involving both text and image in his piece, “Chapman’s Homer.” Even the exhibit’s informational booklet is an artistic contribution from DOVA MFA alum David Giordano. The variety of media used as well as the continuous interplay between text and image makes us constantly question the issue Cahill brings to light: What is the relationship between text and image, and what kinds of distinctions, if any, can be made between the two? It’s entirely possible that these distinctions are more opaque than we think.

As the Logan Center grows as a hub of artistic activity, curator Monika Szewczyk sees the exhibit as something that can bring together the center’s two target audiences: students and faculty from the visual arts, theater, creative writing departments, as well as the general public who come to the center for performances and exhibitions. “It seemed important to begin by presenting works that quite literally speak volumes, without labels and didactics,” she said. Indeed, enjoyment of the works does not require the expertise of an art historian. I am no art connoisseur myself, but as I walked through the halls of Logan, I felt as if I was on an intellectual scavenger hunt—one in which each piece I came across raised more questions than the next. In short, the exhibit provides an artistic experience much needed in a world in which the relevance and importance of art is continuously under close scrutiny—one that provokes, raises questions, and ultimately encourages viewers to make connections that would not ordinarily be made.

Wall Text runs at the Logan Center for the Arts through November 30.