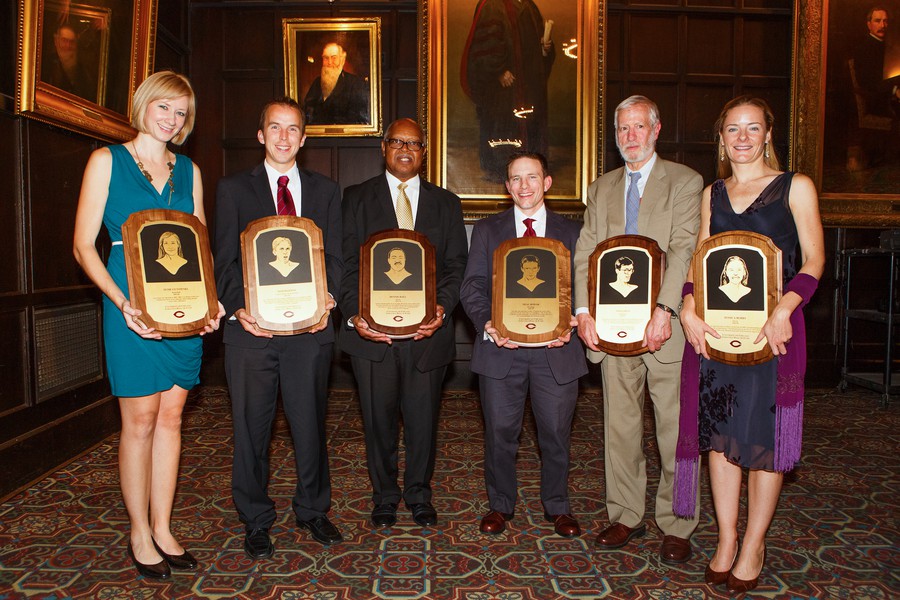 “This is, on a personal level, really emotional but unbelievably gratifying to be here,” the son of a late University professor told me last Friday night. “I’m so appreciative of UC to honor my dad.”

That son was U.S. Secretary of Education Arne Duncan (LAB ’82), all 6’5” of him. But the night was not about him. It was about his father, Starkey Duncan—and the seven other Maroons initiated into the Athletics Hall of Fame for their accomplishments on the field. It was about Thomas Weingartner, the University’s former Director of Athletics, who guided the Department for 22 years. And it was about Chicago athletics, pure and simple.

It was about sports—but it was also about something deeper than sports.

Friday night testified to the storied tradition of Chicago athletics, from DI to DIII, from the Big Ten to the UAA. To the pride that we have for our programs. Or that we once had. It reminded me—or perhaps made clear to me for the very first time—that we have the people to keep that spirit alive…and rekindle it. We have the right type of student-athletes, fans, coaches, and administrators. But we all need to make the effort.

It was a four-part bash: a cocktail reception in the McCormick Tribune Lounge, a dinner, the official Ceremony, and a post-Ceremony cocktail reception at the Quadrangle Club. There were two hundred people in attendance—parents, best mates, current athletes, coaches, loved ones, administrators, fans, members of the Hall, inductees.

“Every time I do this, I end up finding out about the inductees. This year we have eight. And every time I’m impressed,” confided ESPN and ESPN.com legal analyst Lester Munson (JD ’67), who has hosted the annual event since its inception. “This is the tenth class, and it always seems to me they should have been in the first class—I mean, they’re all so good.”

Let me introduce you to a few people.

“I think it’s a great honor,” Ball said. “I was surprised. I wasn’t thinking about it in terms of myself, and I wasn’t even aware of the particular stats which caused [me] to be recognized.”

“It’s a great honor. I was walking around and seeing all the cool sites,” Haxton said, “and [it was] bringing back memories.”

Meet Starkey Duncan (PHD ’65), who served as the University’s faculty athletic representative to the NCAA for more than 25 years and attended thousands of Chicago home games.

“This is part of how we were raised,” Secretary Duncan said. “And he loved it—he loved being a faculty representative to the NCAA. He was instrumental in setting up the conference, the UAA conference—that was a big deal. We used to have lots of conversations at night about the student-athlete balance and values, and he so much believed in the model here.”

Meet Susie Gutowski (AB ’06), basketball. Now a member of the Hall of Fame, joining the likes of Amos Alonzo Stagg, Jay Berwanger, and J. Kyle Anderson…names you might hear around here. 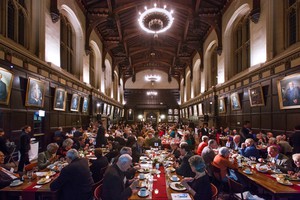 Decades apart, but united by history.

“To be part of something really unique and special is—I don’t know how to put it into words because I’m just beyond flattered and I’m surprised it’s happening to me,” she said. “You’re just like, ‘Whoa, I’m important’—and I don’t feel important day-to-day, you know. So it’s just a great honor.”

And meet Neal Rodak (AB ’98), a member of the armed forces, a two-time All-American wrestler and four-time UAA champion.

“It means a great deal to me,” Rodak said, “and I think this institution—both on and off the mat—contributed tremendously to whatever I have subsequently accomplished.”

It’s about more than honor, though. It’s about shared experiences, familial love, friendship. It’s about preserving an individual memory to create a collective one.

“I was worried that I was just going to break down because my experience here was just so important to me,” Gutowski said. “[I think of] my best friends, the people who for the first time in my life I was like, I’m going to know these people forever, and that’s just the best part.”

I felt something that night, a sense of connection with Chicago athletics that I hadn’t felt before. Something more intimate. A sense that they belonged here. A sense that the sports we cover at the MAROON matter. Or that if they don’t, one day they can.

As Munson said, “The University is part of our family.”

Maybe events like these—events that connect the University’s athletic history with her present—are a way to revive the Chicago athletic spirit. One of the reasons the Homecoming football game fails to generate increased sports interest on campus, I submit, is that we fail to unite the moment with a larger narrative, with an attachment to our team. Our Chicago. We have a severe absence of the pride that was so palpable in Hutchinson Commons. Maybe this is just my self-selective bias, but I think there’s something to it.

Because here’s the thing: on the whole, we don’t care about Maroon sports. But that doesn’t mean we can’t.

“In my work as a journalist I see the dark side of college sports—Penn State, Miami, the University of North Carolina.... Today, I’m working on a scandal at Harvard of all places,” Munson said. “But it feels really good to come here and see something that’s being done the right way.”

Duncan told me that the “U of C family was [his father’s] second family, his second love.”

If we all can only have an ounce of that connection, we’ll create something that’s bigger than sports. Than ourselves.