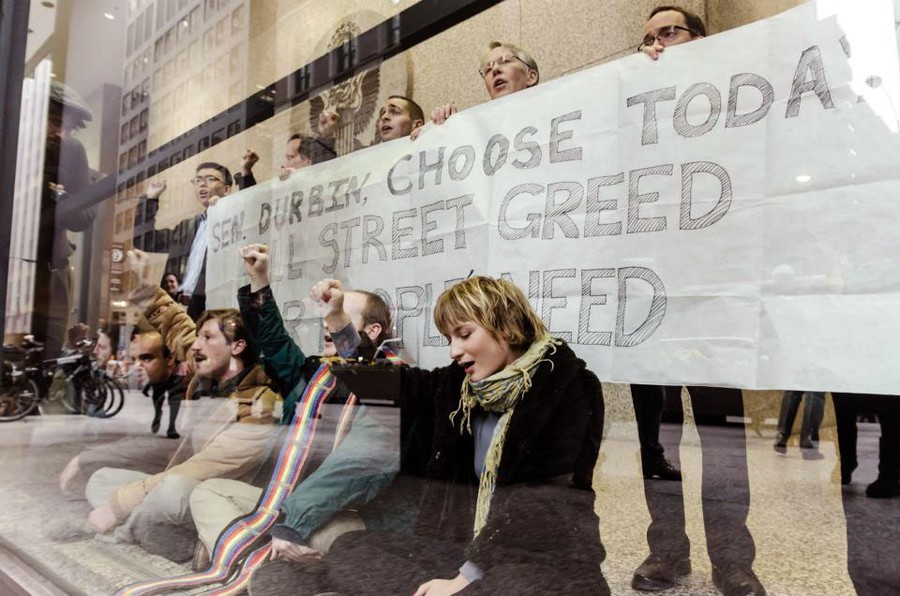 Two U of C students and an alumnus were arrested after refusing the request of federal marshals to leave the lobby of the John Kluczynski Federal Building during a protest downtown on November 9.

The students were taking part in a protest led by Chicago community organizations urging Senator Dick Durbin (D-IL) to support the expiration of the Bush Era tax cuts and to block cuts to social safety nets such as social security and Medicaid.

Third-year and Southside Solidarity Network (SSN) member Paul Kim, fifth-year philosophy graduate student Jacob Swenson, and Noah Moskowitz (A.B. ’12) were arrested along with 17 other protesters among shouts of “we shall not be moved” that Friday.

“Being arrested was the best way to bring attention to the issue,” Kim said.

Kim received a ticket for refusing to leave the federal building, while other protesters have court dates.

Protesters had anticipated the arrests and were prepared to occupy the federal building until Senator Durbin agreed to speak with them, said third-year SSN coordinator Aija Nemer-Aanerud in an e-mail.

Nemer-Aanerud, who was on the planning committee for the action, said that SSN had been working for the past few months with Southsiders Organized for Unity and Liberation (SOUL) and other community organizations in Chicago to stage the protest. She said that around 50 SSN members joined the crowd of more than 400 people to protest against what they deemed to be corporate greed and lack of funding to vital social programs.

“We’re seeing that the problems on the South Side are bigger than just a local issue—they’re part of a systemic funding issue we can see across the country,” she said.

SSN hopes that their message to Senator Durbin will persuade him to remain accountable to the people who voted him into office and to use his power as Senate Majority Whip to prevent cuts to programs that support South Side residents. “We need this money to fund the programs that hold our communities together,” Nemer-Aanerud added.

Chicago community organizers are currently planning to set up soup and bread lines outside of the federal building from December 3 to 6, in what they call a week of action. The event will conclude on December 6 with the erection of a “Durbinville,” alluding to the Hoovervilles of the Great Depression.