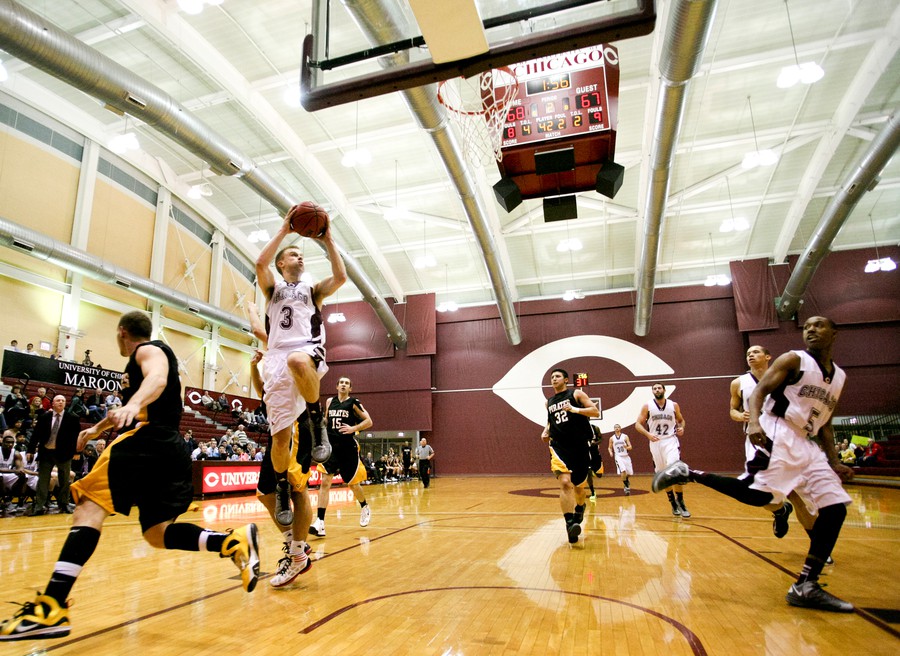 The Maroons were faced with a difficult task as they prepared to take on regional rivals Augustana at the Ratner Center last Saturday.

Not only were the Vikings undefeated going into the contest, but four Chicago players caught a stomach virus in the days leading up to the game.

“That really kind of knocked us for a loop a little bit,” head coach Mike McGrath said. “We didn’t have a terrific week of practice, in part because of that.”

The illness put the Maroons (3–1) at an immediate disadvantage in the game and Augustana (3–0) were able to capitalize, handing Chicago its first loss of the season, 70–52.

Augustana’s centers, Brandon Kunz and Kevin Schlitter, combined for 24 points. Fourth-year Matt MacKenzie, in his 27 minutes of playing time, faced the task of guarding the rotation of centers.

“Our depth and size [was] a little limited in terms of not having [first-year] Nate [Brooks], and [third-year] Sam [Gage] not being 100 percent healthy,” McGrath said. “[MacKenzie] got worn down a little bit, and they kept going to it.”

“They were so physical that it kind of took us out of our stuff a little bit,” third-year Charlie Hughes said. “When that happened, we kind of collapsed which is kind of the hallmark of a young team.”

Chicago, according to Hughes, was unable to prevent Augustana’s offensive drives, something they had scouted before the game. He partly attributes this to the illnesses.

“We probably weren’t all on the same page like we could’ve been going into that game,” Hughes said.

Offensively, the Maroons shot 37.5 percent from the field and were 3–13 from behind the arc.

“We are a good three-point shooting team, but you have to get your offense started inside,” Hughes said. “Guys in the post were having trouble, and then, we weren’t able to get into the paint as much.”

First-year point guard Royce Muskeyvalley, along with Gage, led the way for the Maroons with 12 points each. The Maroons’ leading scorer from their previous game, first-year guard Jordan Smith, was held to zero points.

Going into the season, Hughes said that the Maroons had the goal of going at least 3–1 in regional action. With the loss to Augustana, Chicago heads into Wednesday’s match against Wheaton with a must win mentality.

“It’s a big game because only one or two teams from our region get to go to the NCAA tournament,” Hughes said. “In a sense, playing the teams in the region is like a little sort of league play.”

Defeating Wheaton, first and foremost, will come down to Chicago’s offensive performance.

“With Wheaton, the biggest key is to run a good offense and make them guard for extended periods of time and not turn the ball over,” he said.

At the defensive end, the Maroons will be looking to lower third-year guard Tyler Peters’ 22.3 points per game average.

With a lineup that is on track to be healthy by Wednesday, McGrath is expecting the Maroons to exhibit greater physical and mental toughness.

“[Wheaton’s] a very good team, but we have a couple days to get ready for them and correct some of the mistakes we had Saturday,” he said. “I think we’ll come out and play hard.”

Tip-off is scheduled for 8 p.m. at the Ratner Center.