An Obama campaign strategist and U of C alum discussed why he knew Obama would win and the future of the Institute of Politics. 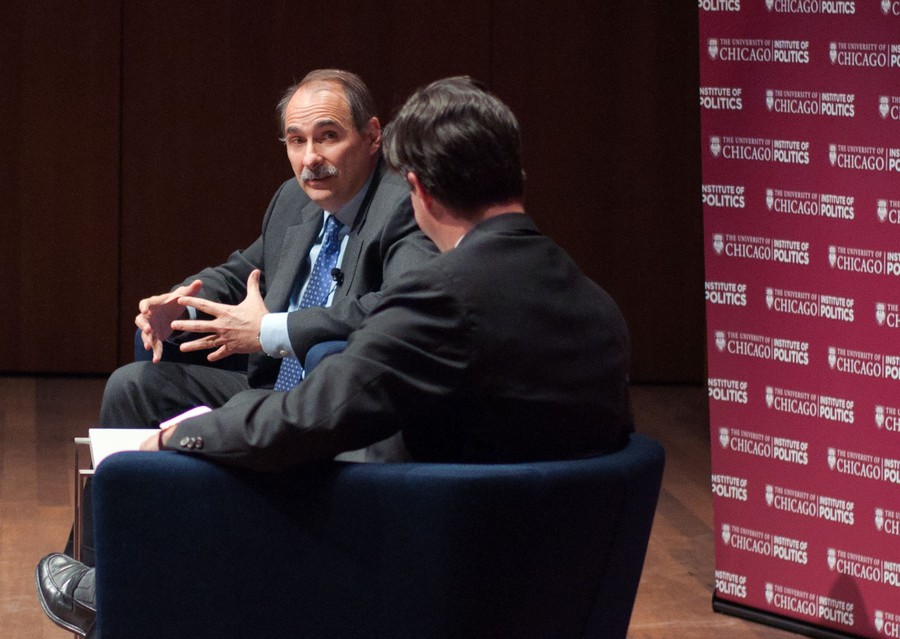 David Axelrod (A.B. ’76), one of President Barack Obama’s closest aides and the communications director of his 2012 reelection campaign, dissected the recent presidential election and previewed Institute of Politics events yesterday evening at the Logan Arts Center.

Axelrod said he thought the seeds of Obama’s victory were planted on the day of the 2010 midterm elections.

“The gravitational pull of the Republican Party from the right became so strong in that midterm election that it was clear to me that any Republican presidential candidate would have to deal with those forces to become the nominee—forces which went against the demographic and social trends of the country,” he said.

It was because of this underlying dynamic, and internal polling that consistently showed Obama in the lead, that Axelrod said he was confident of an Obama win.

Axelrod said the Romney campaign’s inability to define Romney on their own terms was another big boost to the Obama campaign.

“I didn’t think [the Romney campaign] emphasized who he was enough,” Axelrod said. “That of course left an opening for him to be defined along some of the business practices that have become well known.”

Axelrod also criticized the strong emphasis on polling in this election cycle, arguing that many of these polls were not methodologically sound.

“Any two kids with an abacus can do a poll at the corner grocery store, and some national news organization will cover it as if it’s news,” he said.

In a post-event interview with the Maroon, Axelrod talked of his future goals regarding the Institute of Politics.

“I want to give [students] a taste of what it’s all about. And I think for me success will be measured by whether a significant number of students who pass through the program end up, in some form or fashion, in the public arena,” Axelrod said. He said he plans to spend about half of his time on campus running the Institute and half traveling for other duties.

Axelrod said he started the Institute in part to give students opportunities to engage in politics that weren’t available to him as an undergraduate at the U of C.

“I used to joke…that I couldn’t find anybody who wanted to talk about anything after the year 1800,” he said. “That’s one of the things that I want to remedy with this Institute of Politics.”

Axelrod made sure to deliver some practical advice for students considering their future careers.

“I always tell young people, you can make a 30-year plan, but it’s very rare that you can actually execute on it. It’s better to follow your passions if you can, and go where life leads you. And where life has led me has been extraordinary.”