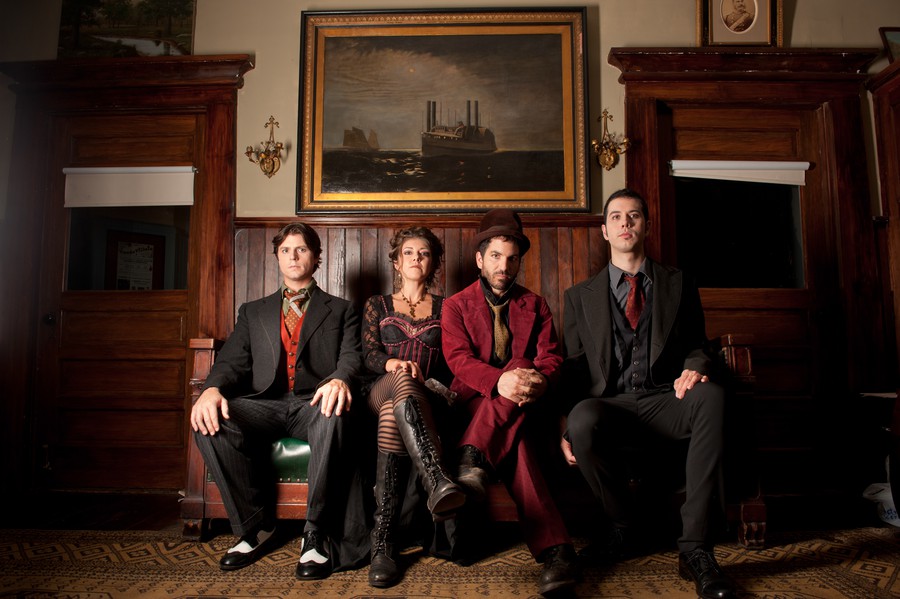 On Tuesday, Connecticut-based swing-pop-folksters Caravan of Thieves will perform for their third time at Schubas in Lakeview. The quartet, led by Fuzz Sangiovanni and his wife Carrie Sangiovanni (guitar, vocals, percussive “instruments”), features Ben Dean on violin and Brian Anderson on double bass. The band, formed in 2008, is touring to promote its 2012 album The Funhouse. The playful CD features junk appliances played percussively, resonator guitars, banjos, and ukuleles.

The Chicago Maroon caught Fuzz and Carrie while they were on the road to Cleveland for a gig. The couple discussed freakiness, Django Reinhardt, and their environmental values.

Chicago Maroon: How would you describe your music to someone who hasn’t yet heard it?

Fuzz Sangiovanni: Django Reinhardt meets The Beatles at Tim Burton’s house. It’s a combination of ’50s music, swing music, folk music, pop music, with a little classic and theatrical blended in. We try to put on a fun, entertaining show that the audience can get involved in.

CM: How did you hook up with Tarquin Recording Studios [which has worked with artists like The Swell Season, Interpol, and The National], where you recorded The Funhouse?

Carrie Sangiovanni: It’s in our neighborhood [in Connecticut], first of all. But we also had a lot of recommendations from artists in the area who said, “You guys would really make a great fit together.” When we got together for the first time and described what we had envisioned for the project they seemed really excited to try to branch out and do something new and experimental with us. It seemed like a very convenient but also good fit.

CM: You use the word “freak” a lot on your website. Do you think everyone is a freak?

FS: We have a song called “Freaks.” That’s how it started.

CS: When we started this project we were trying to create music that was new and fresh. People would at first look at us in bewilderment—like, “What…what is this? What is this music?” We felt kind of like freaks in our own right. We invite all of the people who have a little bit of freakiness inside them to have fun and let it out—we want to build a community of freaks. Even though “freak” may imply that you’re isolated and different, it’s more like we’re different and unique, but we’re all that way together so we should enjoy it and have fun with it.

CM: What is a “Caravan of Thieves” to you? Where does this name come from? What do you steal?

FS: When we were starting the band, Carrie and I were working together as a duo. We were in the process of listening to jazz music, thinking about the music, and reading about the music. I was reading a biography on Django Reinhardt, and his early years leading up to his success as a musician were real interesting. He was just a gypsy living in a camp outside of Paris, and, like a kid, was going into the city trying to scam money out of some of the tourists. This combination of things seemed fun, and sparked the idea of the Caravan of Thieves.

FS: Sometimes we steal some butter from the breakfast buffets in the hotel….

CM: Your band T-shirts are made of 100 percent organic cotton. Why did you choose this more expensive material?

CS: The pesticides and chemicals used to produce “normal” cotton is kind of repulsive, so after reading up on it, I made a decision—using organic cotton was important to me. I thought, we’ll charge the same, make a couple dollars less on each shirt, but I’ll feel better about selling them. It’s also a nicer material—we wanted the shirts to be something that people love to wear, and they do!

CM: On your web site you are dubbed “Gypsy Swinging Serenading Firebreathing Circus Freaks.” Can we expect fire breathing at your show?

CS: Definitely figurative fire breathing. I don’t think the fire codes in the building allow it.

FS: Yeah…the audience members just have to close their eyes and imagine that we’ll be breathing fire.