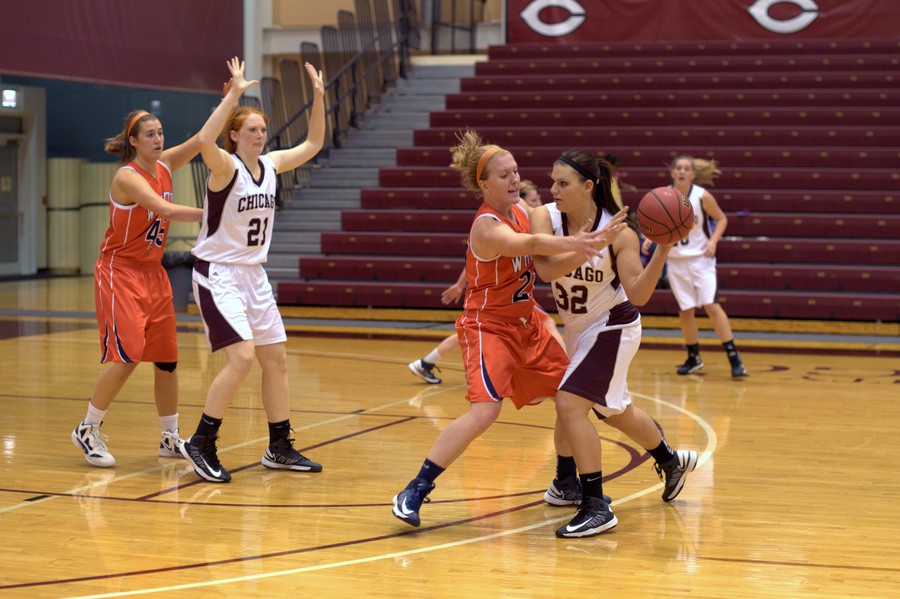 After a decisive loss to Carthage on Sunday, the Maroons hoped to return to a winning record against Wheaton. But those hopes were dashed as they fell by double-digits, 77–62, in their first home game of the season.

“Our mindset going into the game was we needed to compete,” third-year Christiane Murray said. “Coming off of two tough losses we realized we needed to prove to ourselves that we are a tough team. We knew coming in that Wheaton had a great transition game and that in order to win we needed to stop them. Last year’s game was very tough and we knew it would be harder this time around.”

It looked early on as if Wheaton would run away with the contest, opening up a 9–1 lead in the first few minutes.

Although the Maroons battled back, the Thunder’s defense proved hard to beat, forcing 12 turnovers in the first half alone. Chicago was also plagued with poor shooting, as they were 28 percent from the field and 36 percent from the three-point line. Wheaton, on the other hand, came out with a strong first-half performance and went into halftime with a 36–22 lead.

Nevertheless, Chicago rallied in the second half. Thanks to the sharp shooting of fourth-year Jenna Lillemoe and second-year Ellie Greiner, the Maroons were able to come within six points of Wheaton on two different occasions. In addition, the post play of Murray, who finished with 13 points and nine rebounds, helped the team close the gap.

“Jenna [Lillemoe] showed strong senior leadership and hit some big threes to bring us back,” Murray said. “She really stepped it up in the second half and was a driving force in our attempted comeback.”

Despite their best efforts, Chicago could not orchestrate a complete comeback. In the final minutes, the Thunder took advantage of transitions points and free throws to put the game out of reach. Finishing 40 percent from inside the arc, 35 percent from beyond the arc, and with 41 total rebounds, the Thunder controlled the game both offensively and defensively.

“We struggled in the first half with taking and finishing good shots within our offense. We also were not getting back in transition defense. But in the second half we definitely improved on our shot selection and really left it all on the court in an attempt to recover from the deficit we left ourselves with after the first half,” Murray said.

Chicago’s next game is this Saturday against Illinois Wesleyan, the defending 2012 NCAA DIII national champions. The Titans currently have a 3–2 record and are coming off of a close win over UW-Whitewater. The last time Illinois Wesleyan and Chicago played, the Maroons won by three.

The Maroons are itching for the chance to prove themselves again. If anything, their recent losses are fueling that fire.

“Looking forward to Illinois Wesleyan we need to bring it for 40 minutes,” Murray said. “The second half of the Wheaton game showed us how hard we need to play and the intensity we need to bring in every possession. We will have a strong two practices in order to prepare us to play the defending champs.”

Tip off is set for 2 p.m. this Saturday in Bloomington.