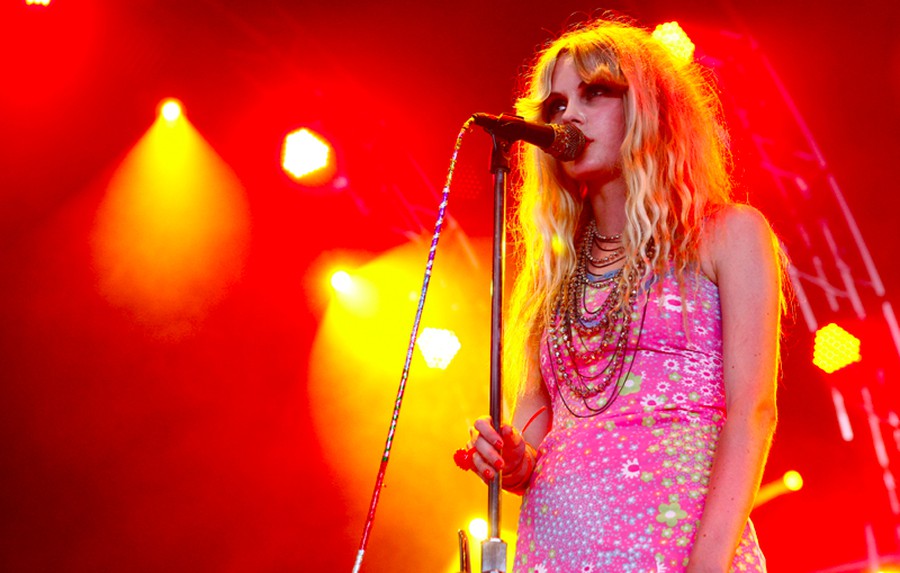 It’s rare to see a horn section these days. Rarer still is the sight of people dancing (okay, swaying) to a horn section. But that’s exactly what happened Sunday night when a stream of skullcaps and mustaches poured off the Green Line and filtered into Bottom Lounge, where the hilariously funky Asteroids Galaxy Tour took the stage and proceeded to confuse and disorient the audience—in a good way.

After an agreeable set of placid electrogrooves by DJ Millionyoung, the Tour kicked off the show with the roaring “Dollars in the Night,” as if to convince the skeptics that the band can really wail. The live sound is a good deal rawer than the one you’ll hear on their studio recordings, which are polished and affected. Still, the gentlemen backing the founding duo proved to be truly skilled musicians (especially Rasmus Valldorf on drums).

Hailing from Copenhagen, the Tour has been playing gigs in Europe and abroad since 2007, when Mette Lindberg and Lars Iverson’s demo reached the ears of Amy Winehouse’s management, who immediately booked them as her opener. They’ve had a few more big breaks since then, like when they followed Katy Perry on tour and lent Steve Jobs their catchy tune “Around the Bend” for an iPod commercial, but they’ve yet to garner a real following stateside. Now is as good a time as any, though, given the recent popularity of other funkateers like Kimbra and Janelle Monáe. And while it’s been going strong for half a decade, the Tour seems to be coming into its own since the release of its second full-length album Out of Frequency this past January. As its producer and primary songwriter, Iverson is clearly flexing his creative muscles on the record. It’s heavier and more daring than their 2009 debut album, Fruit, and has a cinematic feel that’s more Austin Powers than James Bond. If you took equal parts soul, jazz, funk, pop, and psychedelia, added glitter, and put it in a blender, the result would be similar to the sound of the Asteroids Galaxy Tour: a sugary-sweet, maddeningly addictive fruit smoothie of music that echoes Otis Redding, Burt Bacharach, Tower of Power, and Abba, often simultaneously.

The spritely frontwoman, Mette Lindberg, demanded all the attention. Her voice provokes strong feelings. She’s bubbly, sometimes shrill, and has a style of pronunciation so cutesy it verges on baby-talk. This could be a definite turn-off, but Lindberg can pull off some pretty interesting vocal maneuvers, crooning or belting as the situation demands. It’s a wonder that such a powerful sound can come from her tiny, gold-sequined frame.

The band quickly grooved its way through all of the best numbers. These included a particularly gnarly version of “Major”—an upbeat jam that recalls the reggae stylings of Ace of Base—and an extended rendition of “Golden Age,” the ode to suaver times that scored a spot on a Heineken commercial. They’ve played for bigger crowds than Sunday’s modest showing, but the energy was all there.

No one would have complained if the group had decided to play a little longer. The total performance was disappointingly short, even though the band ran through a large part of its repertoire. With more than half a mind to find out when these talented Danes would visit this corner of the galaxy again, I bounced out of the lounge alive with groovetastic energy.