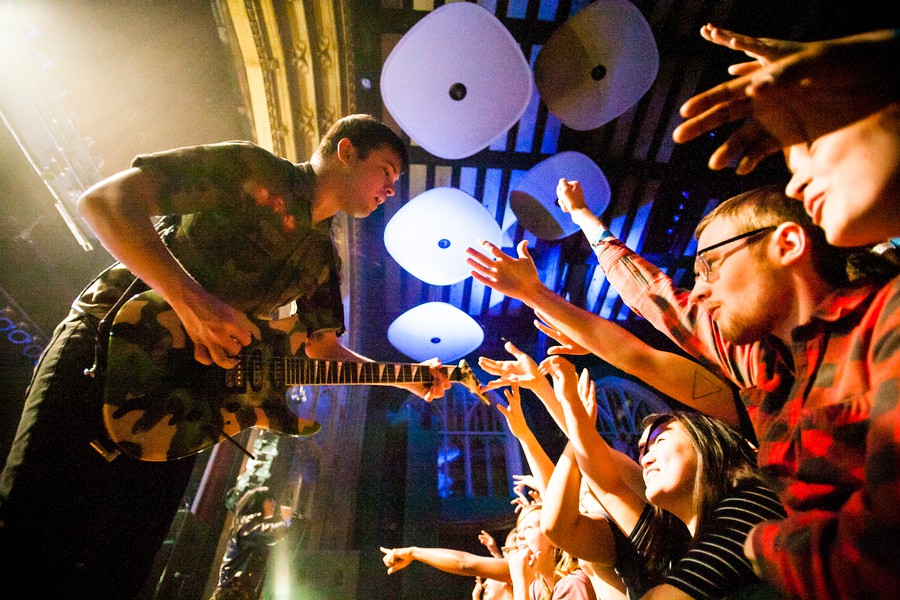 After much anticipation and speculation, Major Activities Board’s (MAB) fall quarter show was a total success when noise-pop duo Sleigh Bells came to campus. Many students took to MAB’s Facebook event page prior to the concert to commend their decision, and their show at Mandel Hall certainly didn’t disappoint.

Sleigh Bells formed in 2008 when guitarist Derek Miller and singer Alexis Krauss met in a Brooklyn restaurant where Miller was working. The band’s initial self-titled EP garnered significant attention from sources such as the New York Times and Pitchfork, and its first full-length album, Treats, was released in 2010. Sleigh Bells’ success took off from there, and they were offered the opportunity to perform at the Coachella and Pitchfork festivals that year. Several songs off the full-length album were used in various TV shows and commercials, including advertisements by Honda and Victoria’s Secret.

The band sought to tinge their 2012 album, Reign of Terror, with a bit more emotion than the party-perfect, in-your-face guitars and shouts from their debut work. The emotion was heavily influenced by the family struggles Miller has faced in the past few years; however, the album still showcased Sleigh Bells’s signature guitar-heavy intensity, a quality that critics have praised throughout their career.

Students lined up early to catch MAB’s fall quarter show, as only the first 200 ticket-holders were given wristbands that granted them access to the pit. Eager fans—several decked out in their best homemade Sleigh Bells shirts—quickly packed into the upper and lower levels of the theater.

Oakland DJ and rapper Jel opened the show with blaring beats and samples that intensified the crowd’s excitement. The lights eventually faded, and the stage was blanketed in darkness until Miller’s growling, distorted guitar came blaring through on “Demons.” The stage exploded simultaneously with blaring light and pounding drums, and Krauss sauntered out from between two tall stacks of Marshall amps, clad in short-shorts, a cropped shirt, and leather jacket studded to the extreme. Despite having broken his arm just a few months prior, resulting in the cancellation of a few tour dates, Miller slashed away at the guitar like it was nothing.

The song came to a close and was quickly followed up by the triumphant guitars of “Crown on the Ground” and the thunderous drums of “True Shred Guitar.” The stage darkened yet again and Krauss reappeared solo to perform “Kids.” She strolled casually across the stage for most of the song, screaming from time to time, falling to her knees during the choruses and urging the crowd to dance with her.

After “End of the Line,” they began slowly playing “Born to Lose”—Miller sluggishly picked at his guitar while Krauss, doubled over, concentrated on producing hushed vocals. Ambling slowly through the verse and chorus, the band came alive and thrashed through the song with the power the audience had anticipated.

The energy the audience was supplying, however, was not enough for Krauss’s peppy performance, and she egged them on to dance even harder during “Comeback Kid,” the band’s first single from Reign of Terror. Incorporating dance moves from the band’s music video for the song, she punched at the air and flung her jet-black hair around wildly.

The band kept up their energy level with more songs from their first album, eventually settling into “Rill Rill,” the cool, catchy track that samples Funkadelic’s 1971 track “Can You Get To That?” Krauss gave the song her all and turned Mandel into a party. An audience member began crowd-surfing and the UCPD security guards—poised to pry him out from the masses—unflaggingly kept him in their line of sight. As she cooed her song, Krauss flashed a quick OK signal and a wink to the guards and helped the surfer on stage, where she briefly danced with him. Soon after, she jumped onto the rails holding back the hoards of students who immediately clambered toward her and clutched her legs to give her support.

After Krauss and Miller had initially exited, leaving the venue in disarray and the crowd eagerly begging for more, they hit the stage again for an unforgettable encore. They performed two of their rowdier songs—“Never Say Die” and “Riot Rhythms”—and finally closed the show with the remarkably simple but brutal “A/B Machines.” Running up and down the stage and high-fiving the audience one last time, Miller and Krauss motioned over the MAB crew spectating on stage right, who eagerly rushed over and jumped around euphorically. As the song came to an end, Krauss hugged the board’s members, thanking them emphatically for bringing the band to campus, and blew heartfelt kisses to the audience as she walked backstage.

The band’s sincere ending made the show that much more worthwhile, as Sleigh Bells clearly relished the opportunity to play at such a small and intimate venue. Audience members were still reeling from the show, grinning and comparing stories about the passionate performance at Mandel Hall that began another year of MAB concerts on the right note.