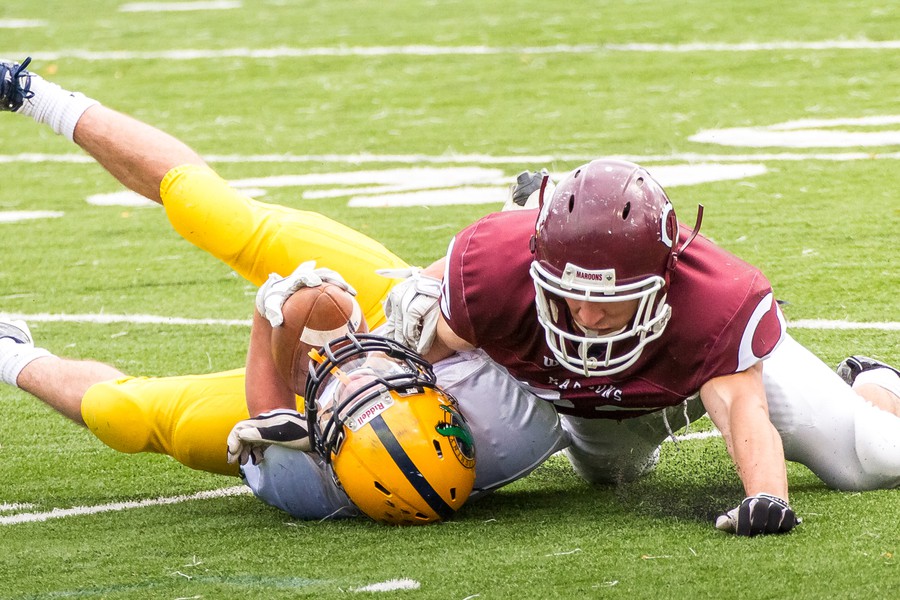 Chicago has run into some solid football teams recently. In the past four weeks, they’ve played teams with current records of 8–1, 5–4, and 6–3.

“Carnegie’s a good football team,” head coach Dick Maloney said, “but we just can’t have lapses like we’ve had.”

Saturday’s showdown started off with the two teams trading quick scores. First-year defensive back Vincent Beltrano gave Chicago the lead, blocking a punt and returning it for a touchdown, before Carnegie responded with a 69-yard drive to tie the game at 7.

The Tartans built momentum after that, scoring on another 69-yard drive in the second quarter. The Maroons were able to fight back with two long passes from third-year quarterback Vincent Cortina to fourth-year receiver Dee Brizzolara, the second resulting in a touchdown just before halftime, evening the score at 14–14.

In the third quarter, though, Chicago fell back into its old habits.

“We had some costly turnovers which proved to be a momentum-changer for them,” Cortina said.

Chicago’s defense held the Tartans to a field goal on their first scoring opportunity in the third quarter, but on their next drive, the Maroons coughed the ball up on their own two-yard line. Tartan running back Patrick Blanks ran it in for the score on the next play, putting the Tartans up 24–14, a margin that proved insurmountable for Chicago.

“Had we capitalized on our opportunities, such as scoring two more touchdowns in the first half instead of throwing an interception in their end zone and fumbling the ball just two yards shy of the goal line [one of Chicago’s two costly fumbles], it would have been a whole different ball game,” head coach Maloney said.

Instead, the Maroons let the game even further out of hand later in the second half, allowing Blanks to score his third touchdown of the day in the fourth quarter, capping the 31–14 victory for the Tartans.

Blanks finished with 159 yards with those three touchdowns.

“Our defense played ok, but they’re just a whole different team with [Blanks] in there,” Maloney said.

The Maroon offense put up solid numbers in the defeat. Cortina finished 20/32 passing for 193 yards, one touchdown, and one interception. Brizzolara caught eight passes for 74 yards and a touchdown, and the offense surmounted 295 total yards. It was the inopportune turnovers that cost Chicago the victory.

“You have to play for sixty minutes, and we just didn’t do that,” Maloney said. “We have to score, eliminate turnovers, and stop the long drives.”

The Maroons may feel they are better than most 4–5 football teams, but until they start turning their potential into wins, those feelings will mean very little. Undefeated Wash U comes to town next weekend for the annual Founders Cup, and Chicago is hoping to make the most of its last opportunity to leave a mark on the conference.

“We [have to] beat ’em so they’re not undefeated anymore,” Maloney said with a smile.

The Founders Cup kicks off at 12 p.m. at Stagg Field.