This weekend get your Joyce on, view the making of a semi-improvised television classic, and stock up on some classy knickknacks. 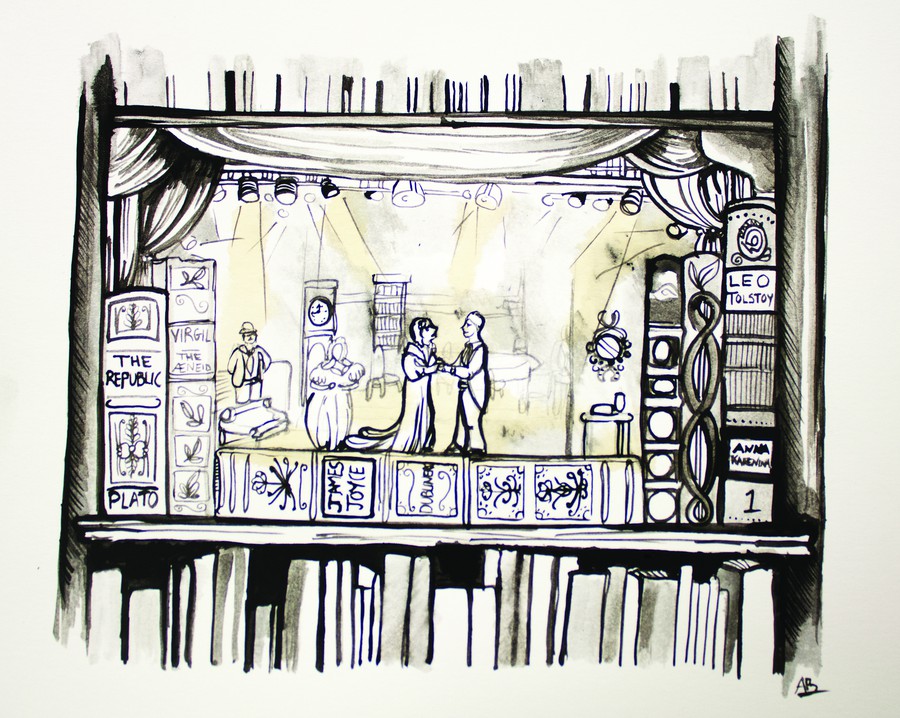 Open Books, a local nonprofit with a mission to promote literacy, is hosting Make the Case 2012, a quirky combination of home improvement, bookkeeping, team sports, and philanthropy. Guests are welcome to competitively deck out a bookshelf in a classic literary theme of their choosing…if they can muster the required donation of $500 to participate in the action. You’ll probably watch—and read and cheer from the sidelines; Bookslut managing editor Charles Blackstone, science writer Rebecca Skloot, and WBEZ reporter Anthony Martinez will judge. Ticket includes appetizers, drinks, a raffle ticket and a coupon to Open Books bookstore. Next week the shelves will be filled with actual books donated by partner nonprofit organizations in Chicago. 3730 North Clark Street. Starts at 7 p.m., $40.

Don’t let the name fool you—James Joyce’s “The Dead,” now playing at Court Theatre, is allegedly a heartwarming musical, perfect for the upcoming holiday season. This theatrical adaptation of Joyce’s short story of the same name (the final tale in his famous collection of stories, Dubliners) focuses on a gathering of family and friends who have joined together in celebration of the Feast of the Epiphany in Dublin. Go this evening for their Student Night and you’ll get discounted tickets, pizza, and the lively company of your peers. 5535 South Ellis Avenue. Starts at 8 p.m., $15 with UCID.

Want some sugar on your tongue? Will you settle for some brown sugar scrub on your forehead? Tyler, Tia, and Francesca of Collective Cleaners are leading a workshop called Caring for your Home and Body, dedicated to DIY bath, body, and cleaning products—all natural, some delicious. After concocting various waxes and serums, participants will leave with homemade lip salve, essential oil conditioner, a beauty product recipe booklet, and more. Come hungry: The byproducts of the lesson will be cooked down into organic soy milk and veggie burgers. 5638 South Woodlawn Avenue. 1–4 p.m., $5–$10 donation for cost of materials and venue.

If you enjoy bowling, driving around, and having the occasional acid flashback, then Lebowski Fest Chicago is the weekend event of a lifetime. The two-day festival originated in Louisville, Kentucky in 2002 and was conceived when “Founding Dudes” (some guy named Scott and another named Will) went to a tattoo convention and decided they preferred conventions to tattoos. On Friday there’s a big to-do screening with special guests, live music from the film’s soundtrack, and maybe even some food at the Portage Theater. But if you’re a true-blue dude you’ll stick with today’s event—bowling, costumes, and trivia at Diversey Rock and Bowl. 2211 West Diversey Parkway. 7–11 p.m., $25 in advance ($25 two-day pass).

Leave your place for Stud’s Place, and you shall be rewarded with an entertaining lapse in the space-time-television continuum. Pocket Guide to Hell is producing a new episode of actor, broadcaster, and historian Studs Turkel’s semi-improvised television series, which examined the everyday goings-on of a 1950s American diner. The episode will be set in the present day, but the cast will perform scenarios and personas from the original series in the front bar of the Hideout while an audience watches the event from the concert room. The purpose of all this is to give the illusion that the show is being performed live (which it is, right next door, where nobody is actually watching it). The broadcasting charade will be followed by several short talks, including one by Walter Podrazik of the Museum of Broadcast Communications, where previously unearthed episodes of Turkel’s show were screened for the first time this past September. 1354 West Wabansia Avenue. Starts at 7 p.m., $7–$10 suggested donation.

’Tis the season to start your stockpile of small, fascinating objects to give your friends and loved ones in the coming months. It’s impossible to skimp on kitsch when the Artisan Market Streeterville is coming to town, specifically to the Ryan Family Atrium of Northwestern University’s Lurie Center. The impressive line-up of food vendors includes Fox & Obel, The Goddess and Grocer, Veruca Chocolates, and Rare Bird Preserves. Also expect a wide selection of bangles, throw pillows, and hats—a full list of participating vendors can be found on the festival’s Pinterest. 303 East Superior Street. 10 a.m.–5 p.m., free.