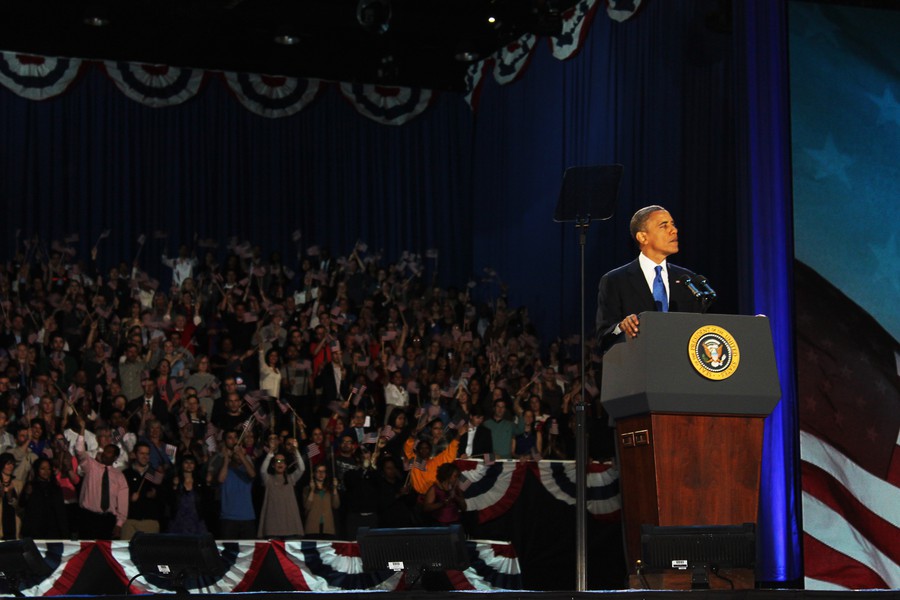 As third-year Lee Kuhn sat behind a curtain Tuesday night at McCormick Place, he heard cheers from the thousands of people on the other side but had no idea what was happening on stage.

On the other side were thousands of campaign volunteers and supporters, from veteran canvassers to first-time voters, who supported the newly re-elected President Obama with never-ending cheers.

Thanks to a stroke of good luck, Kuhn and his friend second-year Lauren Thomas were picked out by Obama staffers to sit behind the President as he gave his speech on stage, where they waited for three hours before the speech.

“We could hear the crowd roaring on the other side—but we didn’t really know what was going on. It was pure excitement and anticipation,” he said.

After MSNBC and then CNN called the election in Obama’s favor at 10:20 p.m., McCormick Place’s main convention room shook with roars from Obama’s most fervent supporters. Attendee Todd Belcore, a poverty lawyer, said he was “overcome with emotion; just overjoyed and in a sense relieved; with happiness and gratitude for all the solidarity, all the people working together.”

Unlike Obama’s 2008 victory rally in Grant Park attended by an estimated 240,000, McCormick Place’s event was indoors and closed to the public, with invitations issued to only a few thousand volunteers who campaigned for him in the last days of the election.

But, as in 2008, Obama’s victory rally brought people of all stripes together.

Veteran canvasser Norma Brown, 58, who has been a Democratic campaign volunteer since 1971, said she’s never seen such a sense of unity as that engendered by President Obama. “I’ve seen a lot of people come together—black and white. Everybody was happy and excited, and history was made, and we were overwhelmed about it.”

For this crowd of supporters, the victory was especially poignant as many campaigners volunteered based on their sense of the high stakes of this election.

“There was too much at stake [in this election] to leave it to luck. So you have to put your own sweat in it. You want to make sure your blood, sweat, and tears are in there if you’re going to hope for the best outcome. Hope alone isn’t enough,” said Belcore, who was afraid that a Romney victory would mean cuts to funding for his legal services.

The poverty lawyer characterized the atmosphere as “absolutely electric” and “one of love, happiness, and excitement.”

This excitement, pointed out UIC freshman and first-time voter Ian Shipton, shows that the level of energy and enthusiasm is the same as  at the 2008 rally. But “Grant Park was kind of a big spectacle,” he said. “Here it’s a little more suppressed.”

That sense of an ecstatic but slightly more subdued night carried through to Obama’s victory speech, which was delivered a little after 12:30 a.m., but didn’t quite live up to the President’s oratorical reputation for some of his die-hard supporters.

“I don’t know if it was his most inspired speech in terms of the actual content. But I thought for the moment it was the right speech to give. I knew he was exhausted, and it was a lot of stuff he had said before. But clearly the power of the moment made it that much more,” Kuhn said. “It was a speech that the crowd loved, which was also I think the most important thing.”

For Kuhn and other attendees, it was a surreal experience. “I think it’s certainly going to be one of the most memorable experiences of my life,” Kuhn said. “It was weird because we were in the middle of everything, but we didn’t know anything. It was like the eye of the storm. We could hear roars around us. For that moment, it felt like we were in the center of the world.”