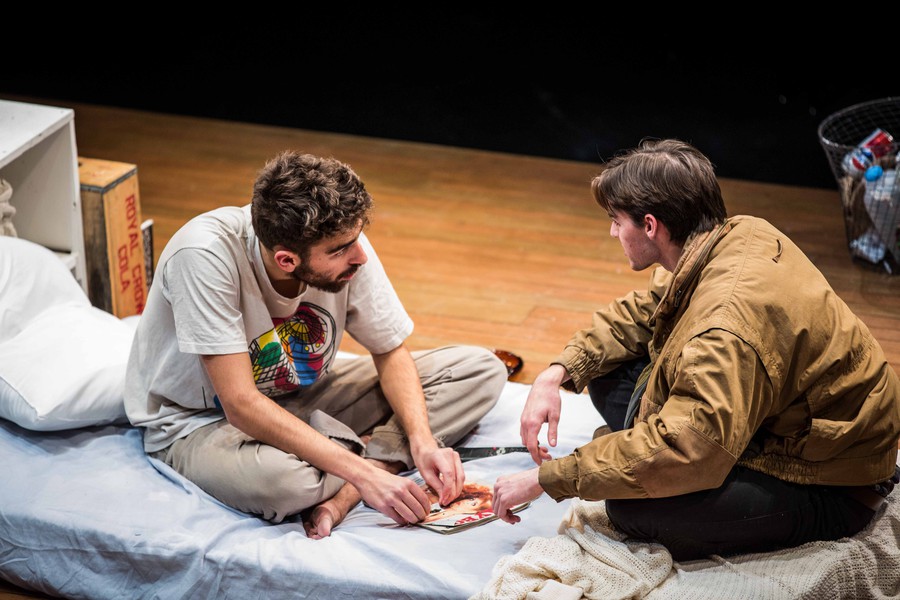 The year is 1982. Ronald Reagan is president. Lionel Richie is topping the charts. And somewhere in Manhattan’s Upper West Side, two very stressed-out young men are bickering about the selling price of a discontinued, semi-collectible toaster. Ladies and gentlemen—This Is Our Youth.

Kenneth Lonergan’s This Is Our Youth (adapted by UT/TAPS) follows a day and a half in the lives of antagonistic buddies Dennis (fourth-year Alex Stein) and Warren (fourth-year Connor Settlemire) as they listen to records, smoke pot, and plot ways to get laid while feverishly pacing the tiny floor-space of Dennis’s messy apartment. Warren—thoughtful, awkward, and a college dropout at 19—has come to crash with Dennis after being kicked out by his wealthy, abusive father. He has also made off with $15,000 of his father’s cash. Dennis—scheming, street-smart, and, frankly, kind of a dick—convinces the impressionable Warren that they can use the money to buy drugs, score chicks, and even turn a profit. What could possibly go wrong, right? Without giving too much away: several things.

Making excellent use of the Logan Center’s black-box Theater West, fourth-year director Fred Schmidt-Arenales spins the room’s claustrophobic closeness and the stage’s almost cruel dimensions into an advantage. “I wanted to keep that ‘trapped’ feeling, while still blocking the actors in a dynamic way,” said Schmidt-Arenales of the stage’s size and unique diagonal-tilt. The sense of being caged-in presides over the characters in the play. Everyone, it seems, wants to escape from something.

The cluttered set, which features stacks of records, a minifridge, and a working television, was furnished with items from the director’s own room, some of which he inherited from his father, whom Schmidt-Arenales looked to as a source of inspiration. “Some of the elements of the play—the music and language, especially—really reminded me of him, which made me want to explore that generation a little bit more.”

If the actors are constricted by the set or its numerous props, they hardly show it. Stein can cross the length of the stage in two strides, but he moves with balletic grace, springing about like a particularly energetic scarecrow. Third-year Gwen Muren, who plays Warren’s tentative love interest, Jessica, says the ever-moving set pieces can be challenging to work around, but they also provide a crucial element of spontaneity. “The little surprises allow for organic interaction, which is really exciting.”

This type of compelling interaction is the driving force behind Youth’s engaging narrative. Warren and Jessica share an extended exchange which is so cringe-inducingly relatable that I wanted to duck out of the theater. For their part, Stein and Settlemire have exceptional chemistry; they manage to pull off Lonergan’s rapid dialogue with believability and, rarer still, spot-on comedic timing. The play is hilarious partly because you’ve had the same stupid arguments with your roommate a million times.

But Youth is heavy, too. Weeping follows laughter within moments, and vice versa. Anger and joy are in constant tension. In fact, scenes shift from light-hearted to serious and back again so rapidly it’s a little disorienting. It’s that youthful duality where something can be no big deal and the most important thing in the world at the same time.

Times have changed a bit. We live in Chicago, and we’ll probably graduate from college. But take away New York, some of the “man”s and “totally”s, swap out Zappa for Ocean, and ditch the crack (the weed can stay), and this is, pretty much, our youth.

This Is Our Youth, at Theater West in the Logan Center for the Arts, runs through November 10.