Four heads of the Fed lay out fiscal policy reservations 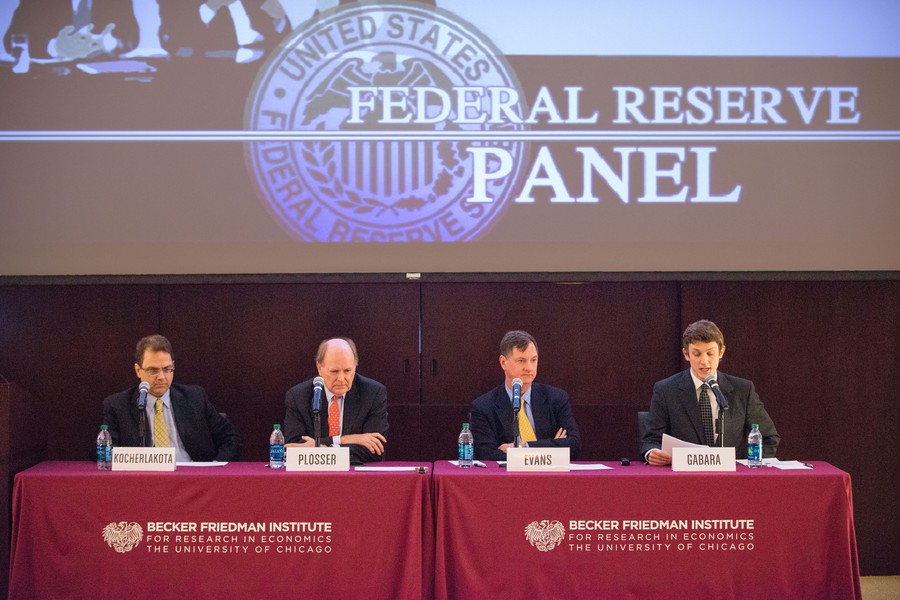 The presidents of Federal Reserve Banks in four different cities disagreed over the proper role of the Fed in setting the nation’s monetary policy on Saturday at an event organized by the Becker Friedman Institute for Research in Economics.

Each of the four panelists runs a district of the Fed in order to implement policy set by the Federal Open Market Committee, which deals with the buying and selling of government bonds in the open market, the most important of the three tools the Fed uses to regulate the national economy.

The country’s monetary policy set by the Fed is based on a “dual mandate, by influencing money and credit conditions in the economy in pursuit of full employment and stable prices,” according to the Fed website.

Charles Evans, president of the Federal Reserve Bank of Chicago, on the other hand, favored the continuation of the Federal Reserve’s dual mandate, arguing that a balance is necessary. With America’s current unemployment rate of 7.9 percent, Evans proposed keeping interest rates close to zero until the unemployment rate falls back into the stable range, so long as inflation does not rise above three percent.

“We need a balanced approach to reduce deviations from an unemployment rate [of 5.23 to 6 percent],” he said.

The many factors that can cause unemployment make it a difficult issue to tackle, according to Minneapolis Fed president Narayana Kocherlakota (Ph.D. ’87). Kocherlakota added that unemployment can be caused not only by a lack of demand in the market, but also by a fear of taxes on the part of businesses and by a lack of Americans with the skills necessary for the particular jobs available.

Despite the difficulty in determining the cause of our current state of unemployment, Kocherlakota agreed with Evans that interest rates should continue to be held at zero until unemployment returns to its natural rate.

“Over the past two years I have seen evidence that suggests I should put more focus on demand factors than I did even a year ago,” he said.

Although the Federal Reserve presidents disagreed on the dual mandate and how the unemployment crisis in America should be addressed, the panelists all agreed that they do not have all the answers to the country’s economic challenges.

“We have to be more humble about the state of our knowledge in this environment,” Plosser said.

First-year Tyler Kissinger said that the event made him realize “how complex the Federal Reserve policy is and the depth of its responsibilities responding to the mandates given to the Fed by Congress.”