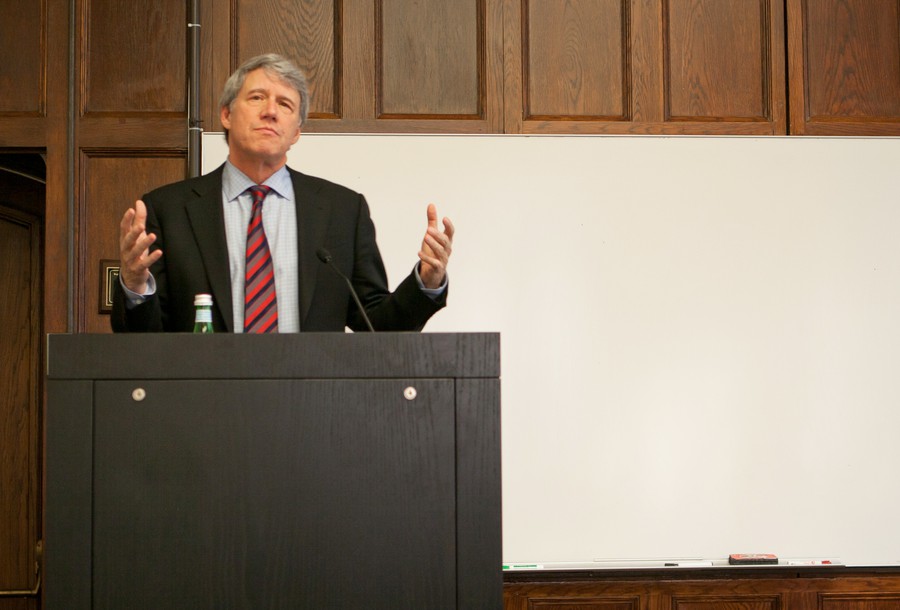 Law professor Geoffrey Stone expressed strong reservations about whether the current Supreme Court is carrying out the vision of liberty imagined by America’s founding fathers in a talk about the Court’s place in American government in Swift Hall this Sunday.

“It is important to remember that the Constitution was first ratified without a Bill of Rights,” Stone said. “But Jefferson reminded Madison of the dangers of majoritarian abuse of power and the need for courts to protect basic guarantees from the majority…to police it.”

Stone noted that this “policing,” for which the Court was originally created, has not always happened in practice, citing decisions like Dred Scott v. Sandford (1857), which allowed states to continue practicing slavery; Plessy v. Ferguson (1896), which created the standard of “separate but equal”; and Korematsu v. U.S. (1944), which permitted the internment of Japanese citizens during World War II as failures of the Court.

Reflecting on today’s Court, Stone called it “the most polarized Supreme Court in history” for being divided at an “essentially unprecedented” level.

“The four to five very conservative justices who have been on the Court during the past 12 years have voted together as a bloc in 99 percent of cases—the one exception being [Chief Justice] John Roberts’s decision to uphold parts of the Affordable Care Act,” Stone said.

While the liberal side of the Court also constitutes a voting bloc, he described these justices as only “moderate-liberal.”

Stone criticized judges’ use of “originalism,” a method of legal reasoning which bases decisions on the deciphered initial meaning and intent of the legal text, calling it inconsistent, unprincipled, and often politically conservative.

“The truth is that there is no guiding legal principle that is consistent with the rulings of this conservative Court,” Stone said. “So these decisions are being decided for personal reasons based on personal values. It’s a major dilemma.”

Looking forward, Stone predicted that if President Obama is given the opportunity to appoint another justice, it would be “the most divisive nomination in American history” as a result of extreme polarization in the Court and in the Senate, which must approve the nomination. The nomination would also be contentious, Stone said, because the appointment could change the balance of power between liberals and conservatives on the Court.

“While other justices in this century have been approved by an average of 97 percent of the Senate, [Obama’s nominees] got an average of only 63 percent approval,” Stone said. “This shows just how polarized our political process has become.”

The talk was in conjunction with the Renaissance Society’s hosting of the art installment We the People, designed by Danish-Vietnamese artist Danh Vo. We the People consists of a scale reproduction of copper sheets from the Statue of Liberty left deliberately unassembled and installed separately in fifteen cities across the world. In September, fragments of the statue were installed at the Law School, the Booth School, and at the Oriental Institute, in part due to Stone’s advocacy of the project.