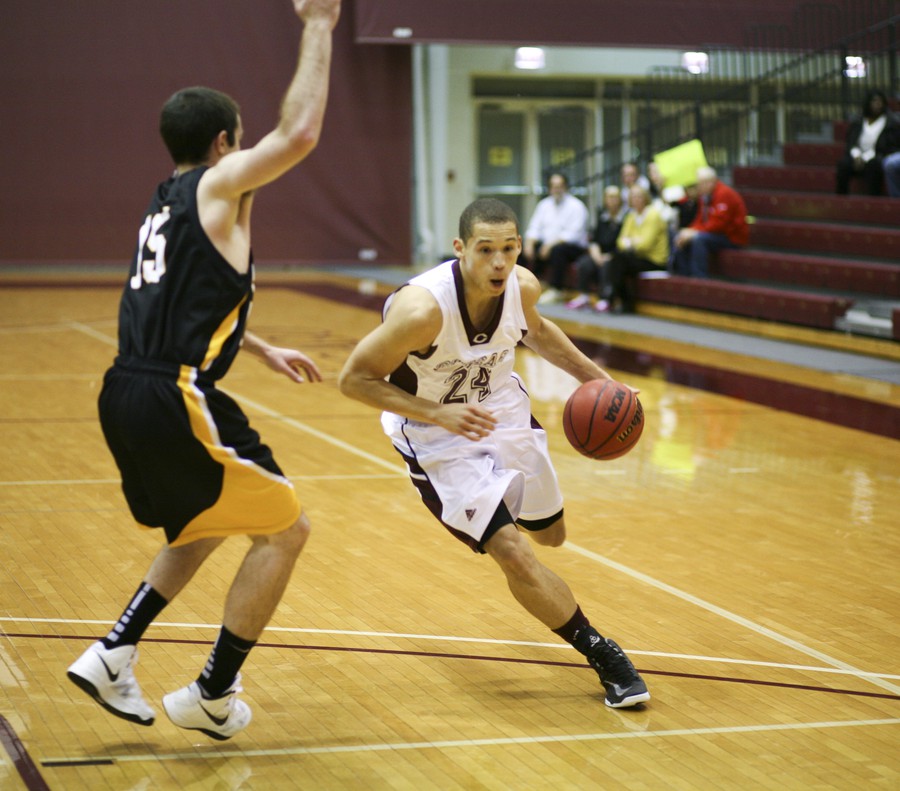 Then Pyper missed the first five games of the season. In his return games against Augustana and Wheaton, he failed to break double digits: he scored eight in each game, and made only two-three pointers total in those two Maroon losses.

But that all changed on Saturday at Kalamazoo (2–3).

“My teammates kept finding me, and I was able to keep getting myself a little space between me and the defenders, so I was able to get good looks and shots that I can make,” Pyper said. “When you hit a few shots you kind of stop thinking; you just focus on the next one and try to get the ball back where you can shoot it again.”

Although the Chicago second-year scored 13 points in the first half, his first-half performance was outshined by the Hornets. Kalamazoo shot 70 percent from beyond the arc and 59.3 percent from the field. Third-year guard Mark Ghafari led the Hornets’ offense with 16 first-half points.

Even though the Maroons were down by 10 at halftime, 39–29, Pyper said he felt he was going to have an explosive second half just seconds into it.

“I’d say that I knew I had it going when the first play of the second half I got a nearly wide open look and knocked it down,” Pyper said. “After that, I felt like we could really put together a run and get back in the game, and that I could have a lot to do with that.”

Having had no leads the entire game, a Pyper three-pointer put Chicago within one with 7:47 left in the contest.

Even with Pyper healthy, the second-year said not to expect 30-point performances every game from now on.

“I would say that the expectations can’t be too high,” Pyper said. “I doubt I’m going to go out there and score 30-plus every game, and I’m not the kind of guy to go out there and try. I would say that you can expect me to continue to shoot and hopefully make open shots and to try to do everything I can to help my team win, whatever that may be in each particular game.”

The Maroons will need their shooters in top form on Saturday at Lake Forest (1–4). Chicago is 0–2 on the season against regional opponents and will need to defeat Lake Forest and Illinois Wesleyan (5–2) for a chance at an at-large NCAA tournament bid if they do not win the UAA.

Two days before the start of winter quarter on Saturday, January 5, Chicago opens up its UAA season at home against Wash U. The Bears, who are 7–0 on the season, are the favorites to win the UAA, according to the UAA preseason poll.

Chicago looks to be in better form next quarter with the return of third-year guard Derrick Davis. Davis has sustained an injury but will likely be back in January.

With a healthy lineup, the Maroons look to contend for the UAA title.