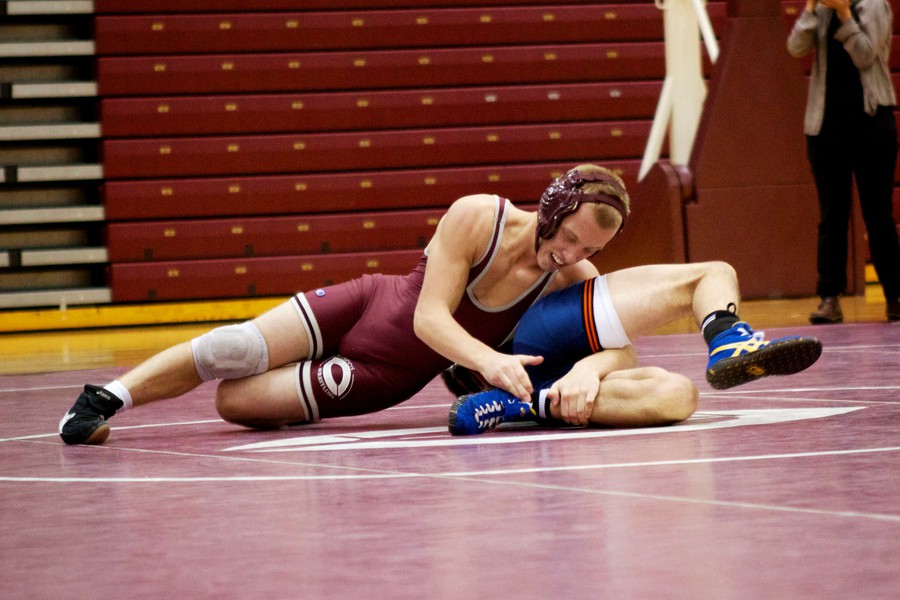 Entering the meet as three-time defending champions, the Maroons lost control over their fate with a 19–14 loss to NYU in the first match, before putting up a 40–6 score against a depleted Case Western squad, winning four of the six contested bouts. NYU put up a similar score against Case Western to seal the championship.

“We’ve had very close dual meets with NYU every year for about the last five years,” said head coach Leo Kocher. “This one was another nail biter.”

Wrestling with lingering injuries, second-year Jake Schramm opened with a 4–3 decision at 125 pounds. First-year Willie Long won a similar one-point decision at 133 pounds to open a 6–0 lead for the Maroons in the match. Both Schramm and Long were named to the All-Association team.

NYU trotted out DIII’s fourth-ranked wrestler at 165 pounds, and the ninth-ranked wrestler at 174 pounds, but third-year James Layton and first-year Ryley Hankenson were able to avoid losing major decisions or getting pinned, respectively. Later, against less overwhelming competition in the dual with Case Western, Layton wrestled a much closer match, losing a one-point decision, and Hankenson avenged his loss with a pin in 2:50.

A third-straight winning decision for NYU at 184 pounds gave them a 16–10 lead, and the Maroons would have needed both their last two wrestlers—first-year Mario Palmisano at 197 pounds and second-year Jeff Tyburski at 285 pounds—to win, one of them with some sort of bonus points, to seize the championship.

Palmisano earned himself the UAA Rookie of the Year award by coming up big with a 17–8 major decision in his hometown with his family in the stands to put the Maroons within two points of NYU.

“It meant a lot to get the award,” said Palmisano. “It shows that the hard work I have been putting in all season long is starting to pay off.”

“[We] have a very talented freshman class,” Palmisano added. “It is an honor to receive [the award] amongst so many other wrestlers who also deserve recognition for their hard work.”

Palmisano slotted in as the fourth Maroon on the All-Association team, joining Schramm, Long, and Range with his dominating performance.

Providing context, Kocher noted that “the NYU wrestler [at 197] won a tournament earlier in the year, and Mario pretty much destroyed him.”

The outcome of the meet came down to the clash at 285 pounds between Chicago second-year Jeff Tyburski and NYU’s Jamie Myers. In another close match, Myers came out on top with a 5–4 victory.

“While 285 was the final match, the fact is that we had five other matches we lost, and a win in any one of them would have brought us the championship,” Kocher said.

The Maroons do not plan to let the decision linger for long.

“I know that everyone left everything they had out on the mat and that’s all we can ask for,” Palmisano said.

The Maroons, though, will have to wait two weeks until they wrestle next at the Great Lakes Regional on February 25 in Minneapolis, the season’s penultimate meet. First- and second-place finishers, plus a handful of at-large bids, earn a ticket to the DIII national championships two weeks after that.

Even though Kocher and the Maroons will not dwell on their UAA loss, they are not hesitating to use it for motivation looking forward, to the next meet and to next year.

“I feel we should win [the UAA championship] every year,” Kocher said.