Hyde Park in the vintage days 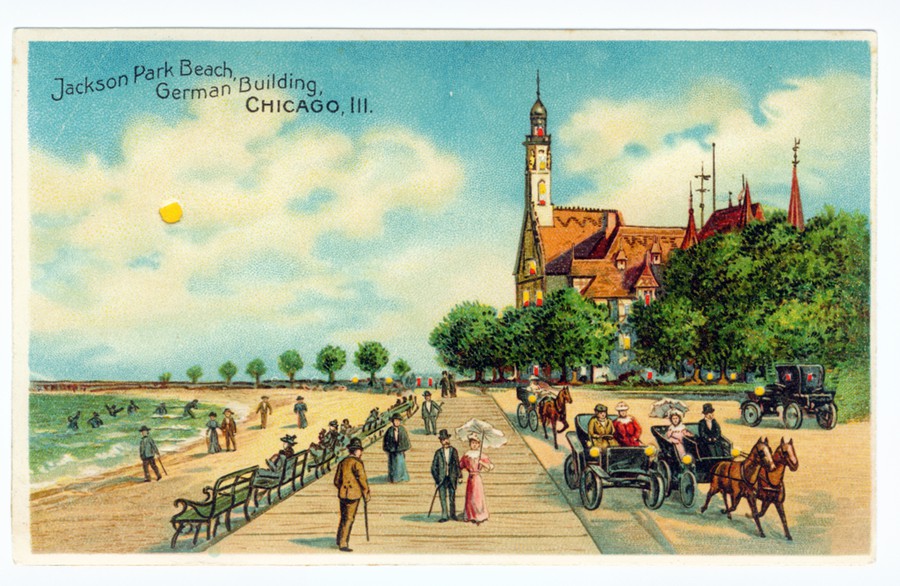 Courtesy of the Chicago Postcard Museum

Today, the name “Hyde Park” inevitably evokes association with familiar places like the Medici Bakery (established in 1962), Harold’s Chicken Shack (established in 1950), and of course the most prominent Hyde Park resident of all, the University of Chicago (established in 1890, first classes held in 1892)—essentially, a list of fine institutions that in our consciousnesses have been around forever. But before these residents arrived, Hyde Park looked far different than it does today. Remove the street grid, rethink the lakeside, and eliminate any knowledge of urban living from your mind for a second—now imagine Hyde Park as a resort location for America’s elite.

In the mid-19th century, Chicago was in the midst of unprecedented industrial expansion and population growth. By the 1850s, Chicago was one of the nation’s major railroad hubs, with over 30 lines transecting the city, and it jumped from being the 92nd most populated city in the nation to the ninth in a mere two decades. With its population growth, the city rapidly became a center of commerce, immigration, and politics. Unfortunately, Chicago also quickly became one of the filthiest cities in America due in part to overcrowding, disease, the stench of the stockyards, and springtime mud from the bog. Thus, despite its economic successes, Chicago was ultimately considered an undesirable place to live, especially among those who possessed the means to move elsewhere.

This is the background against which Paul Cornell entered the scene. The cousin of Ezra Cornell (of Cornell University fame) and brother-in-law of John Evans (of Evanston, Illinois fame), Paul Cornell was a successful Chicago-based lawyer, hotel entrepreneur, and real estate guru, who, by the time he was 31, had adopted an ambitious vision for an escape from the ills of Chicago through the establishment of a resort community for the city’s affluent elites. In his plans for the retreat, Cornell hoped to attract a group of well-to-do businessmen like him, as well as civic leaders and politicians and their families.

With this objective in mind, Cornell in 1853 purchased 300 acres of marshland about seven miles south of downtown Chicago between what is now 51st and 55th Streets. Though the area was essentially a marshy swamp at the time, Cornell recognized the potential of the land and struck a deal with the Illinois Central Railroad Company, granting the railroad permission to operate through Hyde Park in return for the construction of a passenger stop in the community. Furthering his mission of creating a commune for the wealthy, Cornell named the new area Hyde Park, after the London landmark, and marketed it as an affluent suburb whose contained environment would be conducive to the construction of luxurious homes and estates.

As a tangible initial attraction, Cornell established the Hyde Park House luxury hotel on 53rd Street and the shore of Lake Michigan in a space that is today occupied by the Hampton House, a condominium. Beginning in 1857, the Hyde Park House became the opulent focal point of the Hyde Park community and social life. During its 22-year span (it was destroyed by fire in 1879), the hotel served as a pleasant getaway for both local Chicago elites hoping for a weekend of leisurely relaxation as well as visiting VIPs, such as Mrs. Ulysses S. Grant, Mary Todd Lincoln and sons, and Albert Edward, Prince of Wales, who were known to spend months in Hyde Park living in the four-story building.

By 1856, the now-desirable Hyde Park area could boast access to the valuable shores of Lake Michigan as well as convenient railroad transportation to downtown Chicago. Furthermore, with the frequent leisure visits by the city’s affluent, Hyde Park soon gained the luxurious reputation as the upperclass retreat Cornell initially sought, which set the scene for a pattern of permanent residency, beginning with Jonathan Kennicott, a dentist, who moved onto 48th Street and Dorchester Avenue and became the first official resident of Hyde Park.

In the next few years, the influx of permanent residents into the area included such prominent industrialists as Gustavus Swift, the founder of a meatpacking empire, Julius Rosenwald, the CEO of Sears, Roebuck & Company, William Rand of Rand McNally Map Company, and Marshall Field, founder of Marshall Field & Company.

The Hyde Park residential community independently blossomed upward until 1890, when oil magnate John D. Rockefeller, in cahoots with the Baptists, founded the University of Chicago on land donated by Marshall Field. After this point, the condition and affairs of Hyde Park became increasingly linked to the decisions and influence of the University, and the residential makeup diversified as business giants were joined by professors and other academics that were drawn to the neighborhood by the prestige of the University.

Jump ahead to today, and Cornell’s Hyde Park has shifted, now officially bordered by 51st Street to the north, Midway Plaisance to the south, Lake Michigan to the east, and Washington Park to the west. The ideal of the “affluent resort” in the sense that Cornell imagined has more or less faded with the establishment of the University and changing social conditions of history that eventually brought us the Hyde Park we know today.

For now and for us, Hyde Park is simply home.