Newark Mayor Cory Booker spoke about the challenges of achieving change and the power of small acts of kindness at the 2012 George E. Kent Lecture in Mandel Hall on Wednesday night. 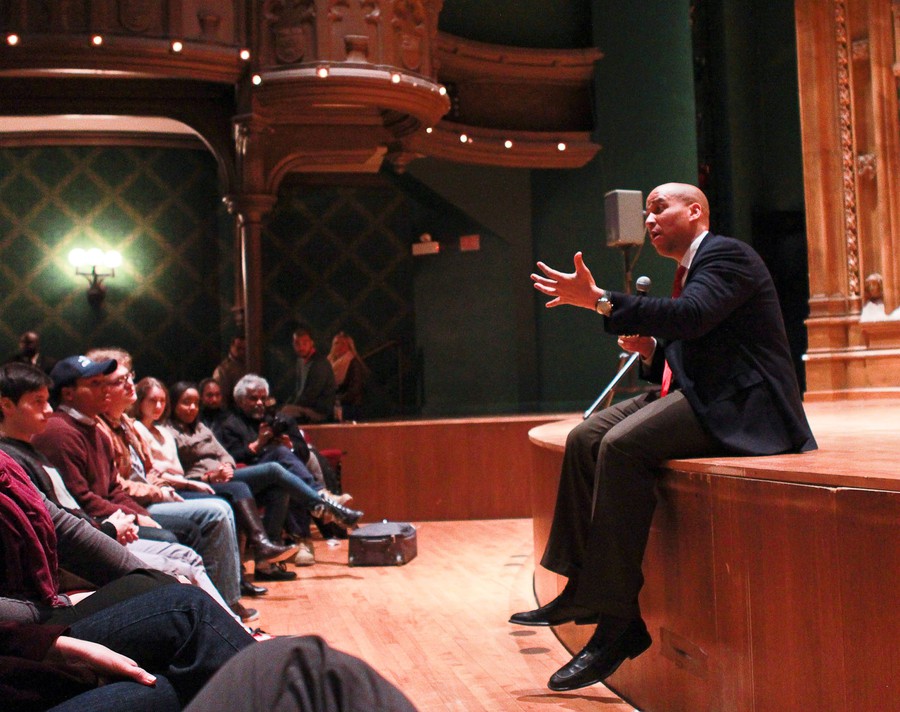 Newark Mayor Cory Booker spoke about the challenges of achieving change and the power of small acts of kindness at the 2012 George E. Kent Lecture in Mandel Hall on Wednesday night.

Booker was elected as Newark’s third black mayor in 2006 and was re-elected in 2010. Since Booker took office, violent crime in Newark has dropped by 40 percent; in 2010, the city recorded its first homicide-free month in 40 years. Booker has also worked on a new public-private partnership to improve city parks and city services and pursued new public education policies.

Booker, who deliberately forewent the on-stage podium in favor of standing on the ground, presented his lecture as a series of stories regarding the difficulties and inspirations that ultimately shaped him as a politician. From recollections of his early childhood and the family lessons he gained from his parents and grandfather to stories about his earliest days in politics, Booker said that ordinary Americans have the power to effect change.

“If we excite the moral imagination of the people, we can do some pretty transformative things,” he said. “The truth of America is a conspiracy of love; ordinary Americans doing extraordinary things…it is not the big speech, the big debate, the big action, the big legislation that ultimately transform souls. It will be those small acts of kindness.”

After earning Bachelor’s and Master’s degrees from Stanford, Booker studied modern history as a Rhodes Scholar at Oxford before earning a law degree from Yale. Booker said that when he earned a spot on the Newark City Council after a long stint in academia, he wished to fix the social issues of the city, envisioning himself as Newark’s version of the New York City education reformer Geoffrey Canada, but his idealism eventually gave way to disappointment.

“A year into this job, I thought I made a mistake,” he said. “I thought I was going to be the next Geoffrey Canada, but I was just a political cog, a wheel, not moving at all, not getting anything done.”

Frustrated, Booker embarked on a ten-day hunger strike and prayer session and was quickly joined by numerous other members of Newark and the surrounding communities, an episode that Booker referred to as his favorite moment as a politician and one that influenced his mayoral goal to promote collaboration.

Booker concluded the lecture by telling the audience a story from his college days, when he had initiated a conversation with a woman and her young children on an airplane; 15 years later, that woman and her family supported his mayoral campaign because they remembered that day.

“Every single day, the biggest thing we can do is a small act of kindness. Ultimately, those acts of kindness aggregated in totality average to transformative changes in society,” Booker said.

Third-year Abdul Dosunmu, president of the Organization of Black Students (OBS), which sponsors the annual talk, said that this year’s Kent Lecture aimed to feature topics that would more tangibly apply to current social issues across Chicago’s South Side. In years past, Dosunmu said, OBS brought in academics to speak on academic theories.