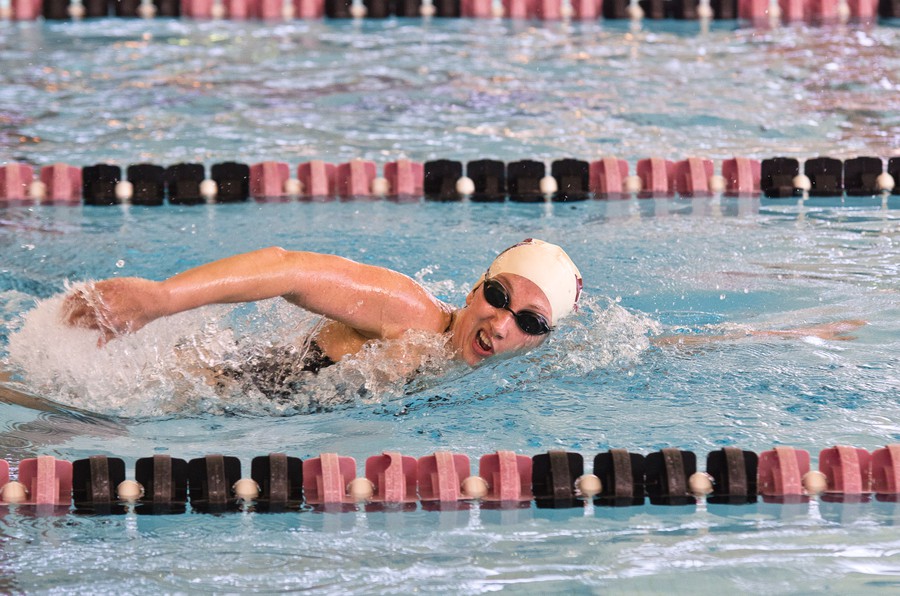 The Maroons came in second place this past weekend at the UAA Championships. In the meet at Case Western in Cleveland, the team finished with 1,288 points, between Emory (2,112 points) and Carnegie (1,125). Emory, the defending national champion, won its 14th consecutive UAA title.

Emory or Chicago finished in the top three in nearly every race. The team also improved greatly over the weekend, taking back second place after the first day and working to expand their lead over the rest of the UAA teams.

“The team did great. We had lots of outstanding swims, and lots of people really stepping up when the team needed them,” fourth-year swimmer Tara Levens said. “We went into this season knowing that we were better than last year, and our results speak to that.”

“I am so proud of how the team did this year. It was a long week of competition, but everyone pushed themselves hard until the very end. Second place is a very respectable achievement for both the men’s and women’s team.”

The team went into the championships with high expectations. They have only lost one dual meet this season, and that was to a Division I school, UW–Milwaukee. The team had also been tapering off the intensity of their practices so that they would be fully rested for the meet at Cleveland. That strategy paid off, as some of the swimmers not only made impressive times, but also broke records.

“We saw a lot of school records fall at this meet, had a ton of all-time top-10 times posted, and had a lot of season-best times,” Levens said. “We put in a lot of hard work over this season, and the results show it.”

Mixing that hard work with strong upperclassmen leadership, a fast freshman class, and solid experience from every returning swimmer, the Maroons expected to have a great season and UAA finish. They know that their team is only going to continue to improve.

“This meet proved that our team is getting better every year. Our freshmen made a lot of key contributions this year,” Schmidt said. “The first years are really raising the bar, and I am so proud to be a part of this outstanding team.”

In fact, the diving portion of the women’s team, along with their male diving counterparts, turned in such a great performance that d3swimming.com suggested that the unofficial slogan for the University of Chicago be changed from “where fun comes to die” to “where fun comes to dive.” The UAA Diving Coach Staff of the Year award went to coach Kendra Melnychuk.

The great performance from the entire team came during a demanding meet. While the Maroons do swim in multiple-day meets over the year, this was by far the longest and most tiring.

“The very first and last sessions of the meet (Thursday morning and Saturday night) were especially good sessions for us, which I think was part of the reason we were able to do so well,” Levens said. “The middle sessions are the ones where we tended to lose focus, but a 3-day, 6-session meet tends to do that to you!”

The Maroons look forward to their next meet, which is the Midwest Invitational. It will be held on Saturday at the Myers-McLoraine Pool on campus. It’s a chance for swimmers to qualify for nationals.

“The Midwest Invitational is primarily a meet for people who didn’t get a chance to compete at UAAs and for people who are on the bubble for making NCAAs to try to get some last fast swims in,” said Levens. “After that, whoever qualifies will keep training and get focused for NCAAs.”

But for right now, it’s a time to celebrate a fantastic weekend and let the good times roll.

“We came in with the right attitude and left with it, as well,” Levens said. A second place trophy isn’t a bad thing to take home either.