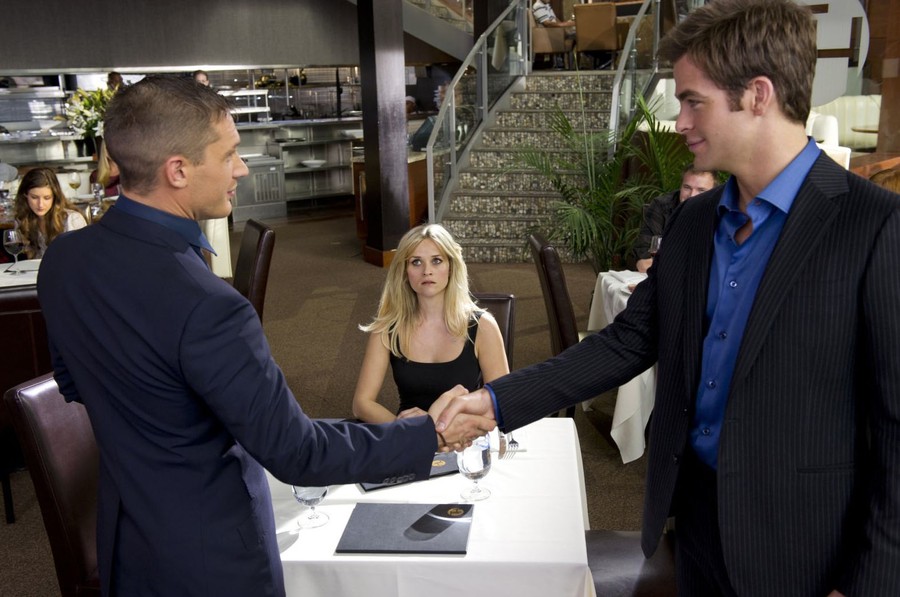 What do you get when you mix a British vet, a couple CIA agents, a Hollywood darling, some romance, and…Chelsea Handler?

You get This Means War, a romcom that tries to be both sexy and thrilling and subsequently fails at both.

Okay, okay. I know that in reviewing a movie so obviously meant to be taken lightly that I am expected, to some degree, to leave my brain at the door. Promos for War made no attempt to portray the movie as anything but what it is: a popcorn flick about an actress we all love trying to pick between two guys that the masses have deemed hot. The key difference being that these gentlemen are trained and highly lethal CIA operatives.

And for this, I was ready. Maybe even a little excited. I’m a Reese Witherspoon fan, and have been ever since her unforgettable turn as Tracy Flick in Alexander Payne’s Election. I was maybe more excited for Tom Hardy, a British heartbreaker who’s currently unknown to most Americans but won’t be soon, thanks to Chris Nolan. Hell, even Chris Pine was capable in 2009’s impressive Star Trek reboot. Directed by McG (Charlie’s Angels, Terminator Salvation) and fleshed out by a slew of notable and welcome faces (Handler, Spiderman’s Rosemary Harris), This Means War had all the pieces to be just as fun, if not more so, than its ridiculous premise promised.

The story is simple enough: Lauren (Witherspoon) is caught between two men (Pine, Hardy), one a seemingly untamable womanizer and the other a sensitive divorced father, both of whom are secret agent BFFs competing for her love. The rest is movie history—bets on who can get the girl, a love triangle, a German villain, spies being spies, quicklycut fight scenes, Chelsea Handler being vulgar in front of children, etc.

Yet War drops the ball on every cheesy, indulgent cliché it promised, landing somewhere above the Katherine Heigl trainwreck Killers but below the Brangelina-helmed Mr. & Mrs. Smith. This is largely because of the film’s inexplicable refusal to indulge in any particular character development. Witherspoon’s Lauren, the film’s protagonist, is as two-dimensional as they come—she has a stable job, a lavish house, a trademark wacky best friend, and, of course, an ex who’s perpetually showing up at the wrong times, armed with his gorgeous new fiancé. That’s about all we know of her, except for her bad luck with the male gender. The film is at its funniest in the few moments that Lauren’s allowed to be a human—two gags in particular come to mind, one about teeth-spinach and another about a peace sign, which both show off Witherspoon’s patented charm. McG is most comfortable filming fight scenes and car chases, and it definitely shows—the scenes that are supposed to be romantic are like laugh-tracked montages, devoid of any chemistry whatsoever. The cast, great as it is, is criminally underutilized, and between the stiff dialogue and the movie’s breakneck pace, has no room to flourish. Even Handler comes off stilted in her few scenes, despite the fact that her lines seem to be ripped straight from the pages of her own books.

I was hoping that the movie might salvage itself with a half-hearted twist, but it didn’t even try. Thus, the only thing that could beat the movie’s predictability is perhaps its sexism. Lauren bemoans her singleness, dances in her underwear, and decides that the only way to pick between men is, logically, by seeing who’s better in bed—but, please, don’t expect her to be particularly put-out by the fact that the men she’s been juggling have been lying to her, stalking her, and secretly filming her during the entirety of their courtship. Similarly, neither beau can be mad at her for “cheating” on them, as they’d both previously established via a “Gentlemen’s Pact” that sleeping with the prize wasn’t allowed. Makes sense. What great and stable relationship didn’t start on a bedrock of lies and promiscuity?

But in reality, This Means War never had to be good. It is, after all, just a vehicle for its leading trio. Witherspoon is smartly trying to stay in the spotlight until her slew of "respectable" dramatic roles hit the silver screen (no doubt in my mind that she’ll have another Oscar nod by ’13). Chris Pine, too, needs to keep his star meter up, just long enough for Star Trek 2 to drop and propel him to relevance once again. For Hardy, who’ll explode with Nolan’s Dark Knight Rises, War’s a way for America to warm to his face before it gets ugly in a major way for his turn as Bane.

Nonetheless, This Means War isn’t the worst thing to hit theaters so far this year, and it was actually kind of amusing to see how many camera angles it takes to hide the fact that Hardy’s teeth are decidedly… British. Odds are it’ll be lost in the wake of the many blockbusters scheduled for release in the upcoming months.

Ah, well. It wasn’t a war worth fighting, anyway.