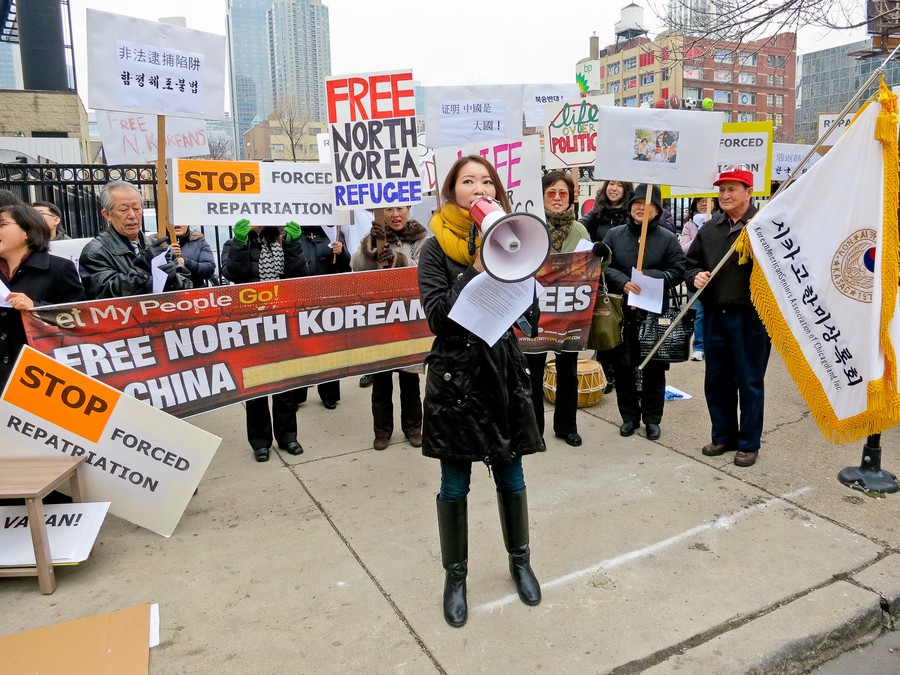 A contingent of U of C students picketed downtown with members of Chicago’s Korean-American community outside China’s Consulate General yesterday morning, in protest of that country’s decision to force the repatriation of approximately 30 North Korean refugees.

For two-and-a-half hours, protesters held signs with slogans such as “Life over Politics,” “Silence is Death,” and “Free North Koreans,” and chanted “Hu Jintao and Kim Jong-un, Side By Side in Genocide.”

Andrew Hong (A.B. ’11), president of advocacy group Emancipate North Korea (ENoK), which organized the rally, dropped off a letter to the Chinese Consulate before the protest calling for China to grant the prisoners refugee status. The letter was accompanied by a petition with about 1,000 signatures from University students and Korean community members around Chicago.

“We were there to be the voice that the North Korean refugees had lost. We have to break the silence so that no more people will be sent back to die,” said Hong, speaking alongside three U of C undergraduates. “If they go back, they will be in danger of being executed. We have to keep fighting.”

On Tuesday, South Korean President Lee Myung-bak said that China should treat the refugees according to “international norms,” and South Korea has said that it will seek international support for the refugees at an upcoming United Nations Human Rights Council meeting in Geneva, according to a New York Times article published earlier this week. China has declined to treat the detainees as refugees because it claims that they entered the country illegally, the Times reported.

Hong hopes major media attention will raise awareness of the refugees’ plight in time for the Human Rights Council meeting. The demonstrators also approached two Consulate workers, directing their attention to the letters, Hong said, while six police officers patrolled by the protest without incident.

First-year protester Elisa Li was among the demonstrators.

“The event was something to call out to people,” she said. “[It] was the perfect time to do something to change [the situation.]”

However, third-year participant Guy Caland said that, while the Consulate “definitely noticed our presence, it would have been nice to actually talk with them.”

Protesters were proud that the movement is focused on human rights, rather than national loyalties.

The protest was the first in the United States since February 15, when 10 North Korean defectors were arrested by the Chinese government. More than 100 demonstrators rallied outside the Chinese Embassy in Seoul last week.

Caland said that the movement is a perfect opportunity for students to act locally for a global issue.

“It’s nice to put eighth week at UChicago in perspective. We have midterms; they have lives at stake,” he said.